Yesterday is next to the last day of the long vacation. Around 4:00 clock, Wendy suddenly brought up the idea to go to the Super Girl Shanghai Concert. Well. It sounded not bad. Although I am not a big fan of super girl – the competition, the TV show and the crazy SMS voting campaign, but I don’t think I am old enough to say: “Let those kids go there and play…”. The Super Girl Concert is a big event in Shanghai – at least in certain rage of age of people. How about just go there and experience the real-time effects of the end of this crazy show?

Shanghai Stadium is the largest gathering place in this city. The 80 thousands capacity is often used for super large event. It is the place for this Super Girl Concert. According to news, many fans arrived in Shanghai from surrounding areas.

We didn’t buy ticket in advance. We have been experienced enough that for these event, there must be enough escrowers hanging around. They offer last minute tickets that is typically cheaper. The risk is, sometimes when the tickets are too hot, you can hardly get a ticket. I think we can take the risk. Finally, we bought the ticket at the original price – 100 RMB (12 USD). It is a little bit closer to the stage than the 50 RMB tickets, but later, we found out the different is so minimal that we can ignore. Many people are selling tickets originally marked 580 RMB at less than 100 RMB. Instinct tells me that they are selling fake tickets. Before the show started, everyone is running, screaming – just like a war.

Here are some photos from the event. 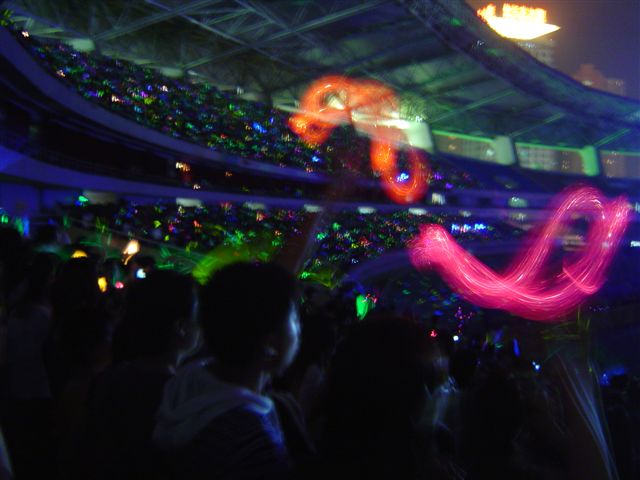 © Jian Shuo Wang. Many colorful lights waving in the air 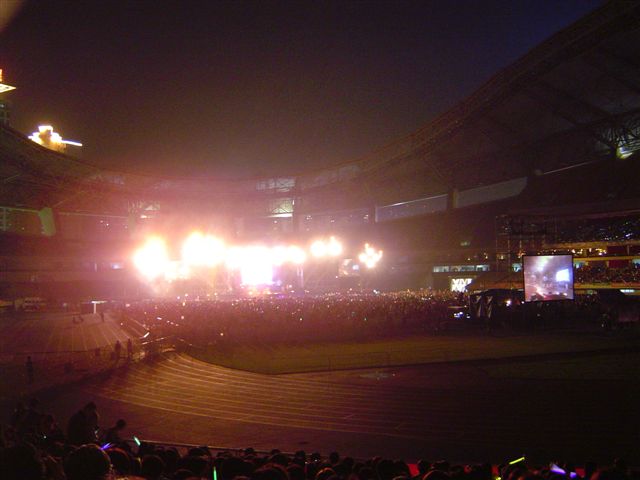 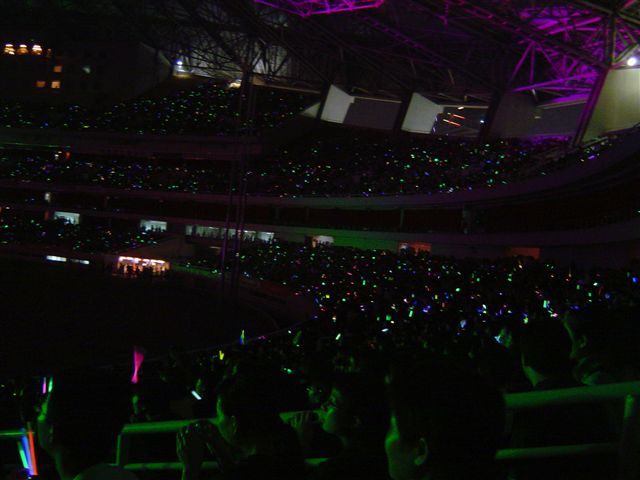 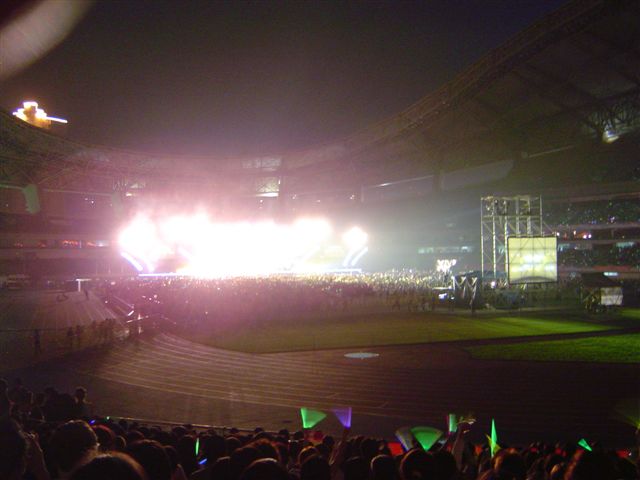 © Jian Shuo Wang. The stage is far away – I bought 100 RMB (12.5 USD) ticket. There is not too much difference whether I am 100 meters closer or further – it is just too far to see anyone on the stage. The telescape helped a lot 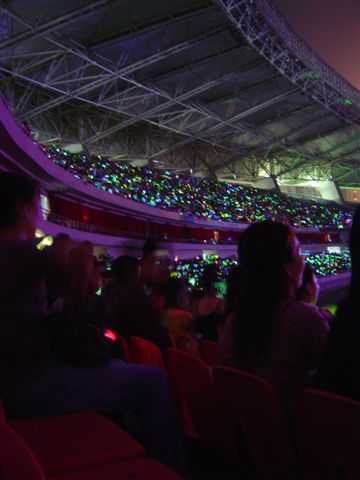 © Jian Shuo Wang. The shining sticks are full of the stadium 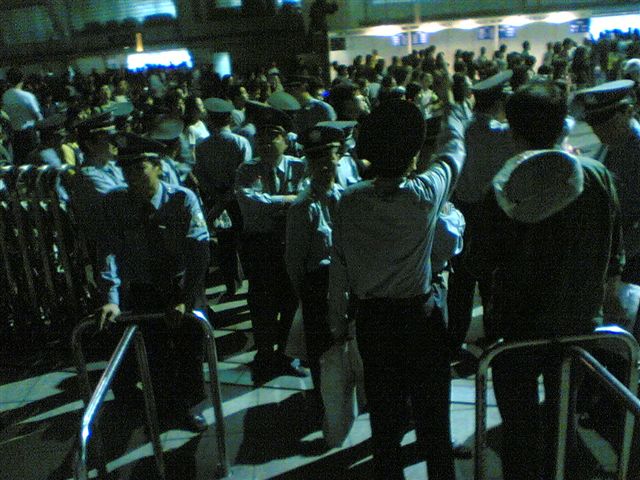 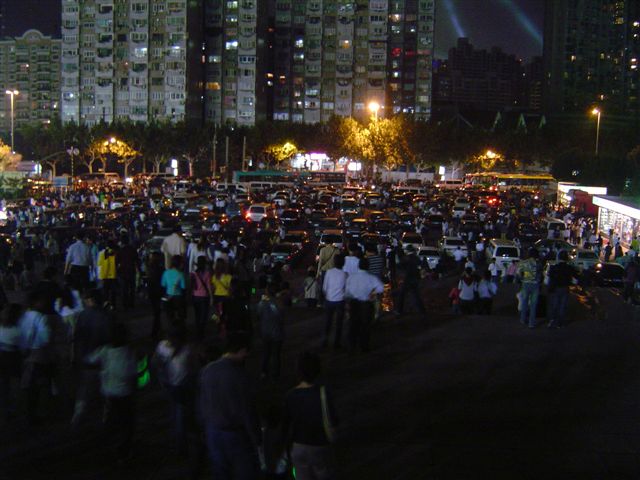 © Jian Shuo Wang. Many cars outside the stadium

As expected, transportation is a big problem for any show like this. When 80 thousand people coming out of a stadium at the same time, there is no way to catch any taxi, any bus. The metro was closed due to the safety consideration – which is critical. We walked about 1 KM to the Xujiahui area, waited in the Metro city for a while and then joined the long line at taxis waiting area…

I didn’t expect to watch the Super Girl Finale in Beijing in donews.com office. Keso and Liuren don’t have a TV set there, but they have projector and laptops. So we linked to mysee.com to watch the online version. The video is provided by P2P media, and about 100,000 people watched the program concurrently in China.

When I passed by the square of the Raffle’s city, one of the most crowded area in Shanghai, I was surrounded by a group of girls. They are fans of Li Yu Chun, the leading singer of the Super Girl contest. They tried to persuade me to vote for Li Yu Chun with my mobile. It will cost me 1 RMB but will help Yu Chun to have more possibility to win the contest.

They old 5 big picture of their super star in hand, and hold them high, so everyone can see. The group of girls are made up of about 10 persons. I didn’t take my camera with me, otherwise I would record it – very impressive.

About 50 meters away are the fans of Zhou Bi Chang, the second runner after Li. Their fans are doing the same. The hot competion has urged many fans go to the street and ask people passing by to send SMS for their supported girl.

Last week, Li Yu Chun got 1.8 million SMS support from every corner of the country. I get this week, this number may double since it is the final and 2 more left the game and there is only 3 persons in the show. Last week, Li Yu Chun helped China Mobile, SP and Hunan TV to win almost 2 million RMB from SMS only. That is amazing.

It’s just like a president election. Super Girl is a vivid marketing, planning case study for business persons around the country.

P.S. I Watched Super Girl, Finally and this Friday is the FINAL. The watching rate raised to 10%, and for the first time, a non-CCTV program run ahead of the Xin Wen Lian Bo at 7:00 PM, which enjoys watching rate of around 7%.

I start to feel silly that I still didn’t watch Super Girl from Hunan TV. Everyone is talking about it in China now – 20 million people are waiting for the TV show every Friday. Wendy just fly back from Boao in Hainan, and she told me that many people on the flight were so worry during the flight that they may miss some part of the show that night.

Super Girl is a miracle in the history of TV program in China. It broke a new record for watching rate. One of the girl got 820K SMS voting in one week. One SMS cost 1 RMB to 0.5 RMB. That is a large business already. I am very happy that the entertainment industry is booming up with the these programs in China.