This Saturday, someone called me by my name when Wendy and I was walking near the Shanghai Jiaotong University. It turned out the lovely young man is one of my readers, and he is a student in the management school in SJTU. His name is Tianhong Shen. He was very happy to see me, so did I.

Later, he was so kind to send me many maps of Metro and Expressway system. It is among the best quality I got. Here is the future Shanghai Metro Map.

So, on behalf of Tianhong, let me post the new Future Shanghai Metro Map: Image credit to the owner of the map

Here is the original image.

Here is the latest map Shanghai Metro and Maglev Future Plan (2006-2012). I know many people who live in Shanghai will find it interesting. Here are my take-aways from the map.

Many More Lines to Build

When all these are built, Shanghai will completely be another city – the concept of far, or near will be redefined.

In case you don’t read Chinese, and cannot find the Maglev, look for the line in the lower part with this color:

It will extends from the current Pudong Airport to Long Yang Road, and then go through the World Expo Site, and THEN, go to a triage conjunction. One branch will go directly to the Hong Qiao Aiport, and the other branch will go to Hangzhou.

At the Hong Qian Airport, it will meet with the Shanghai Beijing High Speed Railway, and the Metro Line #2, and (of cause) the Hong Qiao Airport.

Line #11 runs from Jiading, across the downtown, and finally reaches the Donghai Bridge! I cannot imagine people build such a long Metro line. That is 120 km in total!

Future is Future, that We Hardly Imagine

When people built the first express way in China to Jiading, people may not be able to imagine that express way is not everywhere in China.

It is the same for the first elevated highway in Shanghai. Now, it is the standard for Inner Ring, Middle Ring Road, and some branches like Xinzhuang to Minhang 莘闵, or Yixian 逸仙 Highway.

When people built the first Metro Line in Shanghai in 1994, I am very sure that people could hardly imagine the future system like in the map.

When the first 10 metro stations were built, the general concept is, Metro Station, and Metro Lines are super expensive. Now, there are more than 160 Metro Stations under construction concurrently, and more than that in the plan. Metro Line #11 even have 30+ stations.

Finally, when we built the first commercial Maglev Line in the world from Pudong Airport, we thought (at least I ever thought) that it may be the only one in Shanghai. It turned out the Maglev network starts to grow just like Expressway, Elevated way or highway.

Looking back and looking forward, I am just amazed about how quick things changes; how hard people can imagine a future world, and how easy it is to turn dream into reality.

Let’s wait and see all these lines are completed as planned. I hope nothing goes wrong along the way to the future.

Here is the full size version of the map: The pace of the construction of Shanghai Metro seems to slow down after the recent opening of the Metro Line #1 North Extension. The construction site still occupies the most crowded street, and causing big problems for the surface traffic, but it seems there is no hope to use the stations soon.

For example, the station of the Zhao Jia Bang Road (肇嘉浜路）and Xi Zhang Nan Lu （西藏南路）has been under construction since I moved to Pudong with a car. Now my car has celebrated its one year two month ago, and the station construction site still looks the same. I feel a little bit losing patient. According to the Future Plan of Shanghai Metro, there are enough lines to cover all the urban area of Shanghai, but now, the question for normal people in this big city is WHEN. Jia You, Shanghai Metro!

If someone claims that the Shanghai Metro Line #1 is approaching its limit, he/she is not telling 100% of the truth, but not far from it.

See the pictures I took these two days at the peak time of Shanghai Metro. For visitors to Shanghai, no matter visitors from outside Shanghai or outside China, I suggest them to try transition from Metro Line #2 to Line #1 between 8:00 AM to 8:30 AM on weekdays. Sorry that I may encouraging people to add burden to the Metro at its peak time. :-) It does help to understand how the city works.

Heard of the huge population of Shanghai, you will see the most amazing gather of people – everyone is going or running in the river of people.

Head of the economic power of this magic city? Look at the faces, the dresses, the paces of the people during this specific time frame. You will NOT see so many these business man, engineers, or office ladies on streets after they enter their office building.

Although we cannot claim you see how Shanghai works just by the 30-minute ride, at least people can get the vivid feeling of heart beat of the city. To be honest, I very seldom transit from Line #2 to Line #1 at morning rush time. I heard about the story and know what I should expect, but I was still shocked. Only after I set my foot to the transition tunnel can I understand the meaning of what we call “a lot of people”. The more interesting part of it is, with so many people, we still move so fast – exactly the same pace as the elevator. 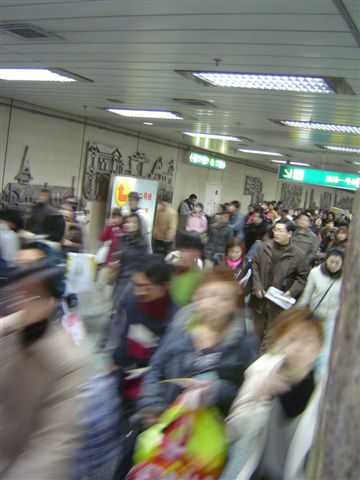 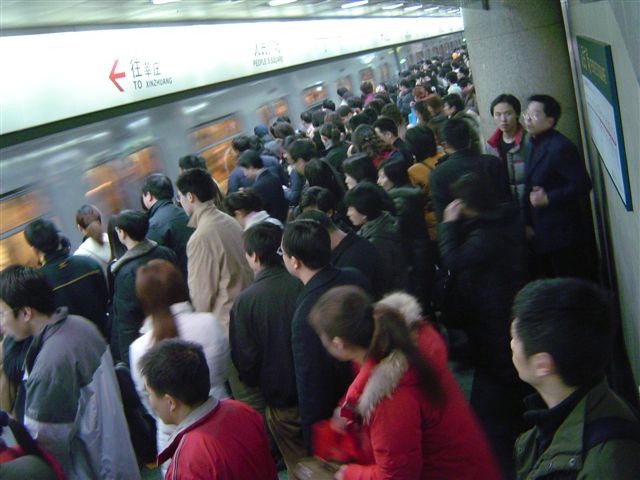 The Train is Coming 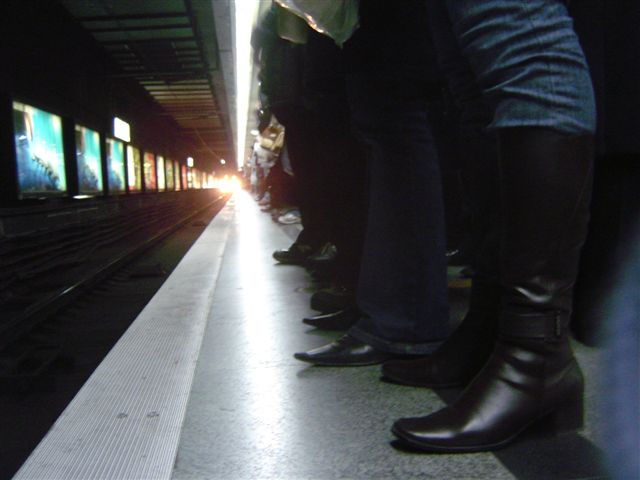 Leave the Training? Not Easy? 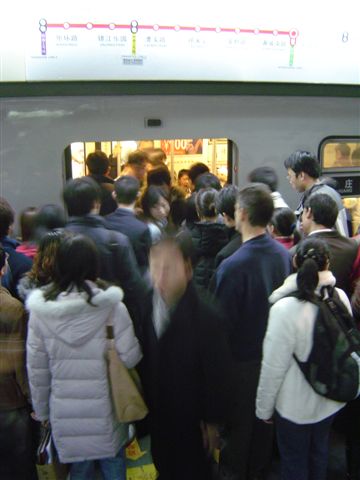 © Jian Shuo Wang. People inside are not easy to get out 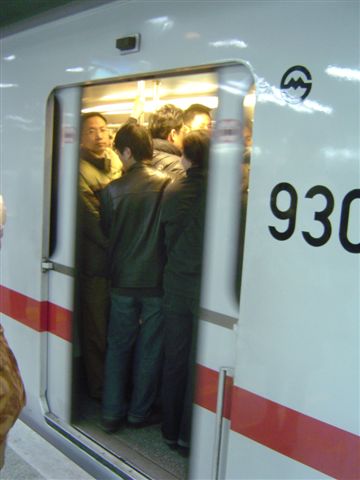 © Jian Shuo Wang. People trying to get the door closed

Next Train? Yes. That is the Only Choice

Immediately after the first train leaves, there are still a lot of people on the platform. The good news for them is, they have a larger chance to get on to the next train. 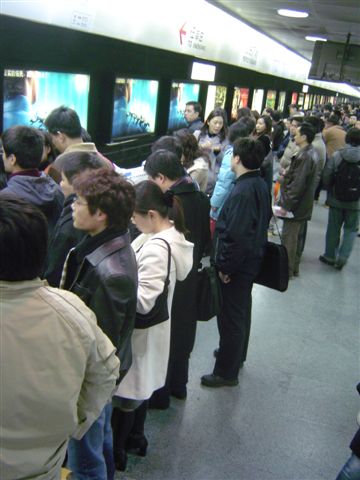 I believe the interval of Shanghai Metro #1 is short enough (two and a half minute I remember). Adding more metro lines is the solution. On one hand, it offload a lot of traffic; on the other hand, maybe it will enable more people to transit at People’s Square and add the burden of Metro Line #1. So Jia You (cheers), Shanghai Metro. I am expecting the Metro Line #7 complete sooner – there is a station near my current apartment. It is expected to be completed by World Expo 2010.

Good news. The new Metro Line M7 Bowen Road (博文路) Station has started construction. The construction site has been cleared and the west lanes of the Jin Xiu Road has been switched to the other side of the road to give way to the construction site. The workers are migrating the electronic cables to allow futhure construction of the Metro Line #7. It is said the whole line will start to construct at the begining next year and will be completed by the year of 2008 or 2009. 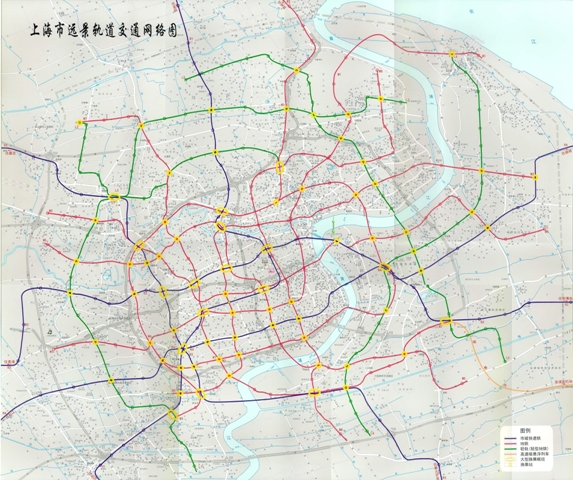 It is very good news for me. My Pudong apartment is 7 minutes away from this station. The M7 will goes from this station to the east and connect to the Maglev. To the west, it will first go through the Shanghai Expro 2004 site and goes to Puxi near Xujiahui.

I will drive to Lin An, a small town west of Hangzhou tomorrow with Wendy, my father, Wang Chen and his girl friend Zhao Xia. It is about 4 hours away from Shanghai and I need to arrive Hangzhou first and the head to west. The winter is coming. Wendy thought of the idea to go outing before it is too cold to go out.

Amazing! Check out the future of plan of Shanghai Metro:

There are so many metro lines under the city. There are some huge transition stations with as many as 4 metro lines. This will be a huge change to the city.

Metro is the nature part of my life already. Xiao Li described the close feeling with the Metro in this entry: the Metro (Chinese site) Good article!