Since I started blog, I tend to do something in “long term”. This time, I did an experiment of how important the MSN Display Name is.

My experiment was, keep the display name unchanged for half an year!

I will keep this version until the new year of 2007.

If you ask me what is special in 2006? My answer is, I didn’t change my MSN display name for the whole year (or only once). This is at least something very special for me in 2006.

During the conversation with my friend, I discovered that if you have an out-of-date display name, people will think:

Of cause none of the above is the real reason. I am just testing people’s reaction to it and have some idea about how important it is to change MSN display name frequently (and the impact of not changing it).

The experiment has run for too long – 267 days since starting, and still have about 100 days to finish. How crazy. When someone start to plan for project that last for months, or years, does it mean he/she is growing old?

Before I start my narration, I would like to thank Sebastian for lending me his Germin GPS and Targ Parsons who helped me to find out the satellite map for that area. To my wife Wendy: I put a very small gift there for you to discover in the future.

It was an incomplete visit. I was about 2.73 km away from the points 30N 119E after traveling about 300 km to the area from Shanghai. The road ahead should not be tough since the mountains are not high and not to hard to climb. But I didn’t have time to go any further. The last bus from the place – a very small village called Yinjiang left 1:00 pm. I have to get back to work the next day. Even I left the village at 1:00 PM, I got home at around 11:30 PM.

I am using some Chinese characters to represent the names of the area to make it easier to find out the places. You know, the first milestone during my trip was to find out what is the Chinese name for Qiuyuan, according to the information page for 30N 119E on DCP’s site. These places are so small that most maps don’t show them. You may see garbage letter or simply a small square if your system does not support Chinese. But don’t worry. When you see it, you know it is a place name in Chinese.

This was not the best itinerary. If I go there again, I should be able to get the area before with in 6 hours.

I got up late at around 8:00 AM. It was already late for the trip. I hesitated whether I should stay home with warm air-conditions, read some nice books and have hot tea or go out of the door to visit a place that is almost 300 km away at around 0 °C. I’m glad I chose the option of adventure. 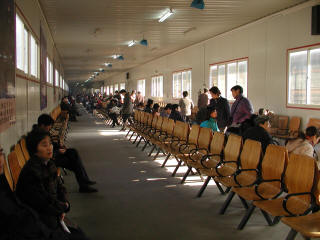 The train from Shanghai to Hangzhou is always comfortable with very nice view outside the window. The only problem is, when I get to Hangzhou, it is already 12:10 at noon. 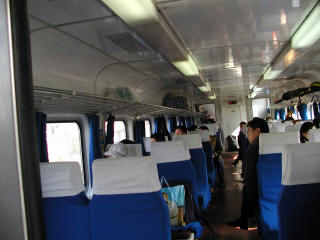 On the way to Qiandaohu, there are some training centers for paddle sports. The road from Hangzhou to Qiandaohu via Jiande 建德 was very nice and comfortable. I would highly recommend a tour to Qiandaohu (The Lake with Thousands of Islands). 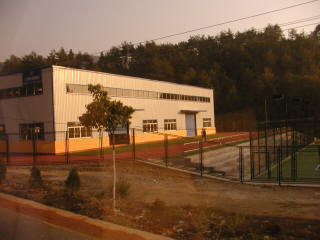 Stayed for one night

I was disappointed when I got to know the last bus to Linqi left 10 minutes before I arrived at the mini bus station. I took taxi there and it cost me 2 RMB (0.24 USD). The only bus going to that direction reaches Tantou, the interaction of the road to northwest direction and the mainstream road to Hangzhou.

I decided to go to Tantou first. I didn’t realize Tantou was such a small town that I could hardly find a place to have my dinner. 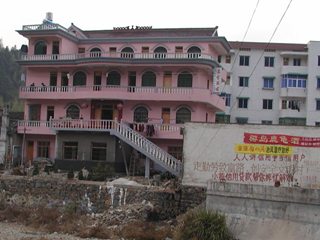 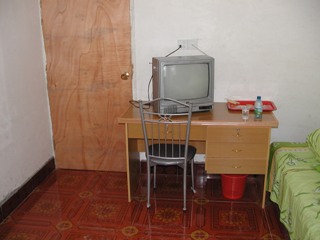 The second day, I got up early and waited for the mini bus to Linqi. The trip took about 1 hour. After arriving Linqi, I went on to seek for buses to Qiuyuan. Fortunately, I caught a bus to Qiuyuan right after I got off the bus to Linqi. According to Confluence Project website, the 30N 119E point is 7.4 KM north of Qiuyuan.

At Qiuyuan, I monitored the GPS excitedly. It seems Qiuyuan is almost exactly located at the 119E longitude line, but still 7.4 km away from the point. I decided to continue to go with the bus to somewhere north of Qiuyuan.

Bus started, heading northwest. With the increase of latitude, the longitude decreased. It meant I must make a decision to get off the bus at the right place for the optimized distance. Just before I wanted to get off, the bus stopped and the driver claimed the end of the bus line – Yinjiang.

Yinjiang is a place that is never marked on any map. It is almost the end of the winding mountain road. I would suggest changing the page on confluence project and marking the point as 3.2 km north of Yinjiang (with bearing of 15 ? instead of 7.4 km north of Qiuyuan. It makes the next visitor’s trip easier. 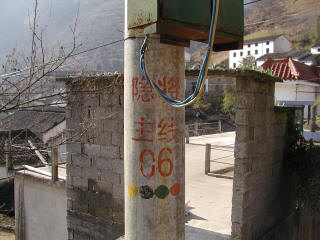 From their, I began to look for my way to go into the mountains. The GPS Sebastian lent to me showed that the point was about 3.4 km away from the village, bearing about 15 degrees from north.

Quickly, I was surrounded by mountains. I begin to feel tired quickly after I climb to the elevation of 500 meters. It was because I have to run along the winding road, hoping to be able to reach the point and get back. 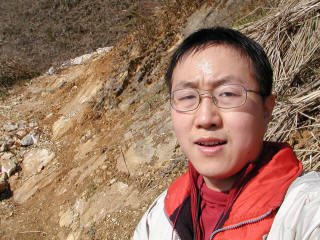 It was not easy to climb mountains. Previously, I attempted to climb exactly as the compass showed. Later, I learnt following the path previous villages left was a better way to save energy and guarantee of no dead road ahead. With time passing by, I was still struggling on the road to climb higher but not northward. At around 12:10 at noon, I decided to stop and go back to catch the last bus leaving the mountain areas.

This is the rock I finally stopped at. I tried to stop earlier but couldn’t help to go further. Then I said to myself – “It is the deal. Reach the stone and get back”. Otherwise, I will miss the last bus back to the civilized world. 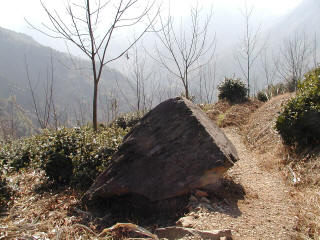 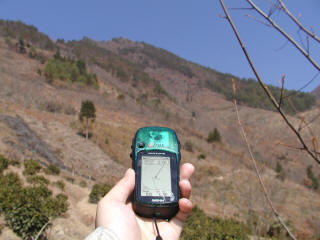 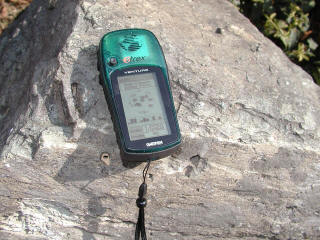 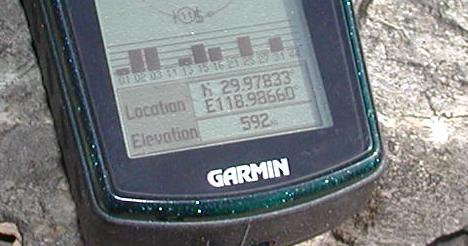 From the point, the 30N 119E is just 2.7 km. With the combination of a compass and a GPS, I can preciously point out the direction, as shown by the right arrow of my compass. 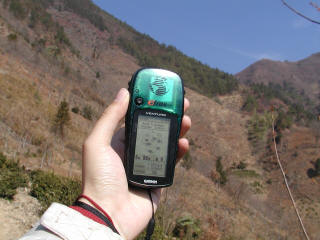 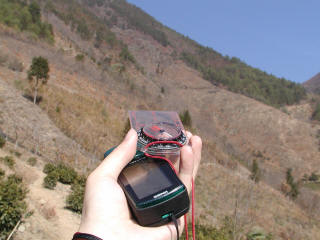 Looking back is the village of Yinjiang. 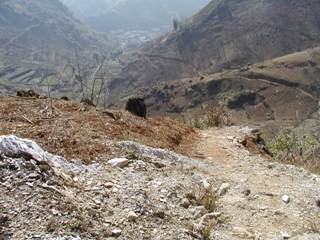 Then I finally caught the last bus. The roads were so narrow that the bus could hardly pass. I have a picture of two cars meeting each other. 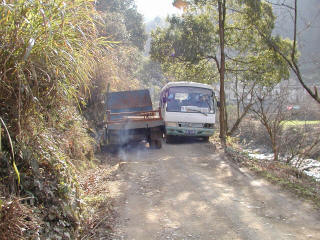 The I took the bus from Yinjiang to Linqi, then transit to bus to Tantou. At last, I caught the bus to Hangzhou. After arriving Hangzhou, I took K838 and finally arrived in Shanghai. 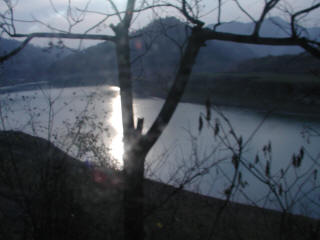 I made a good decision not to insist to visit the point although it was very near. The next time, I will successfully reach the 30N 119E with the knowledge and experience of this trip. Leaving it there gives me a good chance to visit the fantastic place again. I began to love mountain climbing. It didn’t teach how to insist, but also how to give up.

I decided to explorer the degree confluence point of 30N 119E. According to the website, it is 7.4 km (4.6 miles) N of Qiuyuan, Zhejiang, China

I will be there in about two week. Sebastian has been so kind to alow me to use his GPS for one week. Thanks Sebastian.

Before I go, I have collected the following resources and it may be of help. (All of them are in Chinese)

Shangxi Village. From the description, I believe the “7.4km north of Qiuyuan” should be some where near Shangxi Village. I checked the two villages and learnt that Shangxi 上西 and Qiuyuan all belong to the Pingmen 屏门, Chunan 淳安 county, Hangzhou, Zhejiang.

Also on Shangxi. Seems it is a famous place already. There are more than 12 waterfall there.

I was surprised that a map company in Euro has so detailed map for China. It is also the only map I found on the Internet to mark Qiuyuan. It is marked as Ch’iu Yüan there. It seems it is the German style translation (note the two dots on u? ?.