Aoccdrnig to rscheearch at an Elingsh uinervtisy, it deosn’t mttaer in

waht oredr the ltteers in a wrod are, the olny iprmoetnt tihng is taht

the frist and lsat ltteer is at the rghit pclae. The rset can be a toatl

mses and you can sitll raed it wouthit porbelm. Tihs is bcuseae we do

not raed ervey lteter by it slef but the wrod as a wlohe. 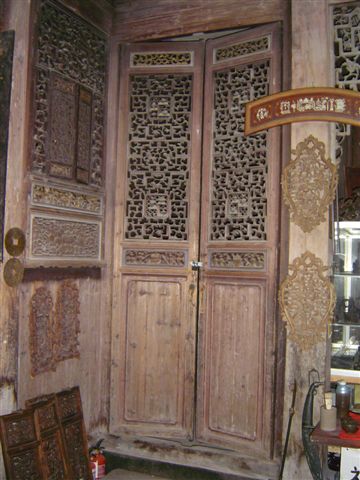 We finally returned to Shanghai today after the four day trip to Hui Zhou. We planned to go to Huang Shan (the Yellow Mountain) but changed our route to visit the villages near Huang Shan instead. The places I visited include a lot of villages with strange names. I cannot read some of the characters in the names. They are (in Chinese and Pinyin) 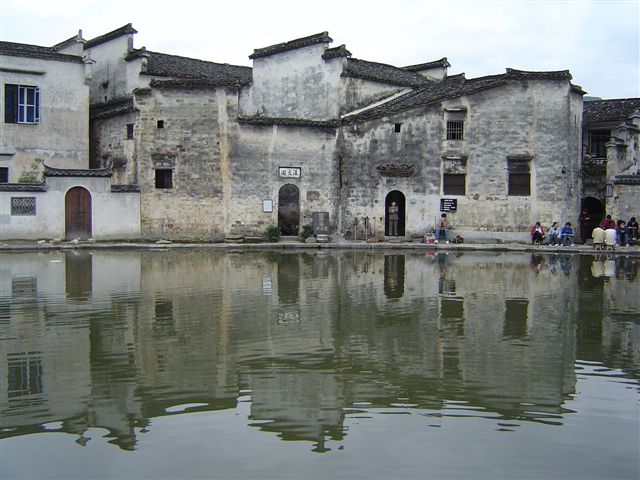 At Hongcun. The village before the Moon Pool, which is the place that on the post stamp with value of 0.08 RMB – the most popular post stamp in China for more than one decade. 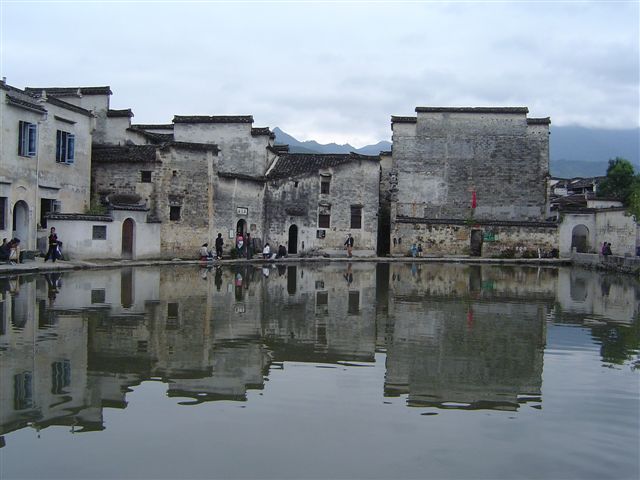 Hongcun – before the moon pool. 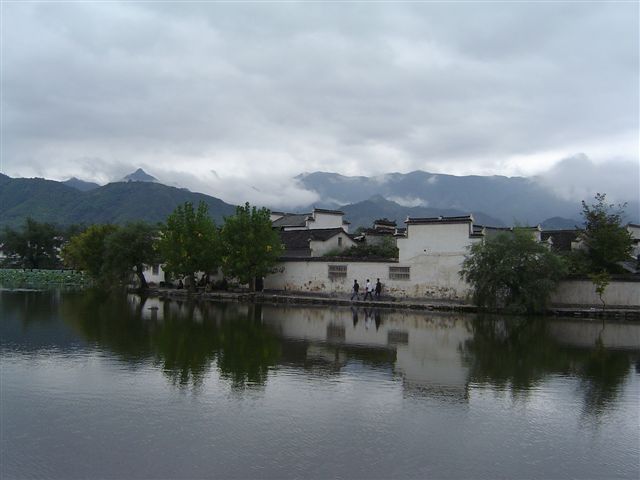 Hongcun before the Nan Hu (the South Lake) 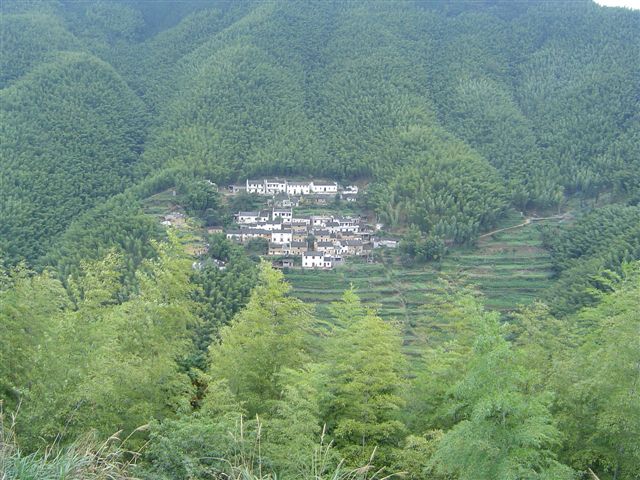 The village in the bamboo sea… It is called Mu Keng. 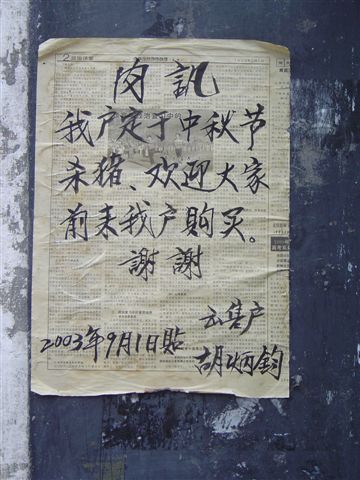 Poster saying “We will kill our pig on the Moon Festival. Those who want to buy meat, please come to my house to buy. – Sept 1, 2003” 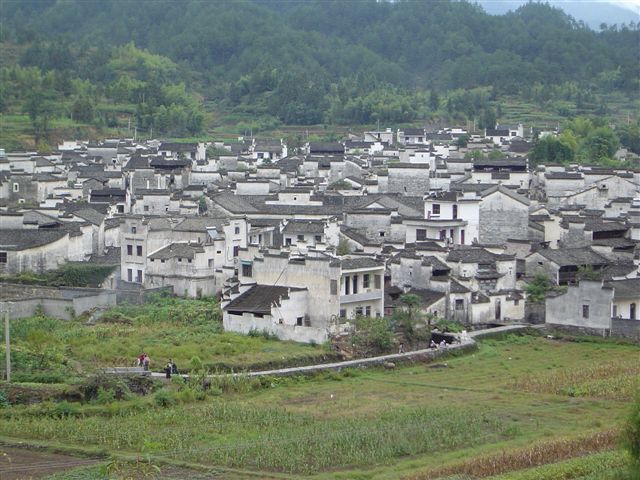 Xidi. Seen from the hill nearby. 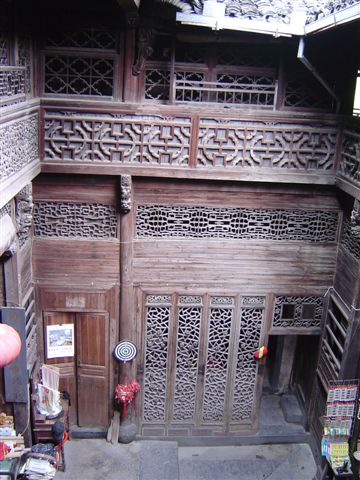 The wood building of Xidi. 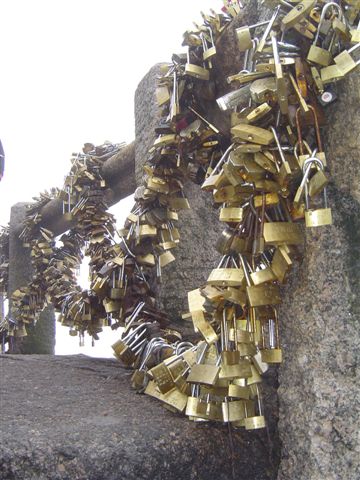 Locks on the Lian Hua Peak of Huang Shan. People will buy pairs of the lock, carve their names on it and lock them together in Huang Shan. After that, people will through the keys off the cliff – it is said that by looking the door together, the two will be together for the whole life. I believe it is true since Wendy and I put our lock there serveral years ago… 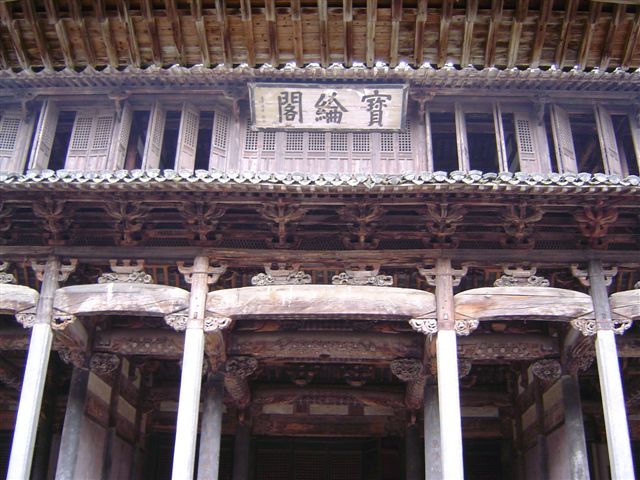 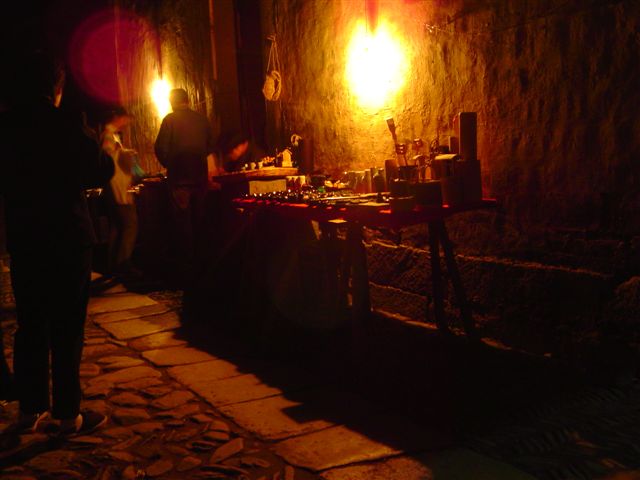 Shops at night in Hong Cun.

This is the door of my room in the “hotel”. It was an incrediable experience to have stayed for one night there. 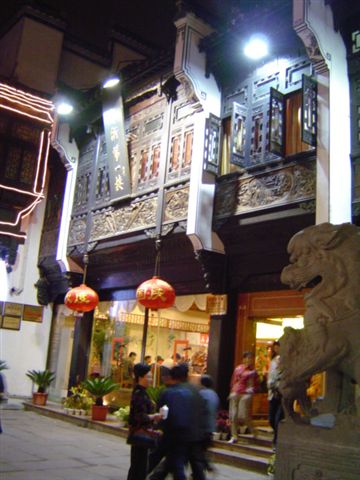 The No. 1 Restaurant at Lao Jie in Tun Xi. It is a very nice restaurant with 30 RMB per person average. We had our dinner everyday there. Highly recommend. 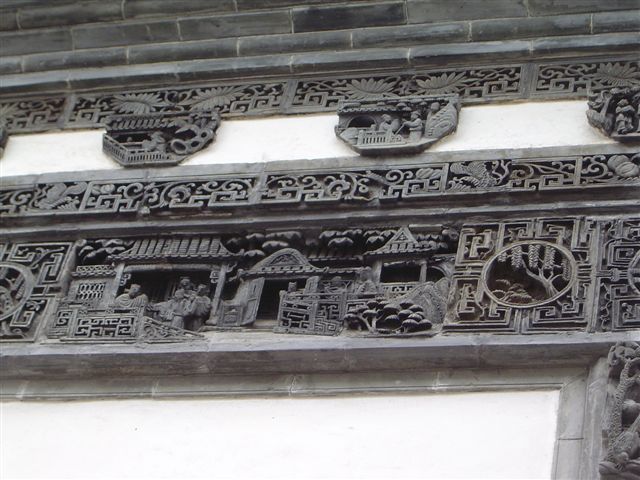 This is the brick-carving on the top of the door of each house. You can find this kind of carving anywhere in the area.

My name is Mike and I am very seriously considering moving to China for a year or two. I had decided to move to Beijing but am now considering Shanghi because it is the business hub of China and a more modern city.

I have been taking classes from a tutor in Mandarin but I understand the people of Shanghi speak a different language – a derivative of cantonese I think.

My question to you is what language should I learn if I move to Shanghi ? If I learn Mandarin will I be able to speak to people in Shanghi ? My barber is a Chinese woman from Shanghi ans she says she speaks Mandarin but in a way that makes it difficult to communicate with people in Beijing because the accents ( tones ) are so different.

I would really appreciate any input you can give me on the languages in China and specifically in Shanghi.

Well. I would definitely suggest you to learn Mandarin, not the local Shanghai dialect – or Shanghainese. It is true that Shanghainese are different from the Mandarin. But almost all the people you can reach can speak Mandarin but not all speak Shanghainese.

Taking me as an example, I don’t speak Shanghainese and can hardly understand Shanghainese, but that does not infect my life. It is a nice place to live.

Unlike Cantonese, Shanghainese is only used in Shanghai, not even in nearby cities like Hangzhou and Suzhou. So it will be almost useless if you go out of Shanghai…

If you and your friend arrive in Pudong Airport on different flight and you want to meet him/her/them, but you don’t know where is the best place to wait because you may not be able to use your mobile phone to communicate, this article is right for you.

So the gate is the best place to pick up another passenger. Check this page:

The gate is shown in the picture below: 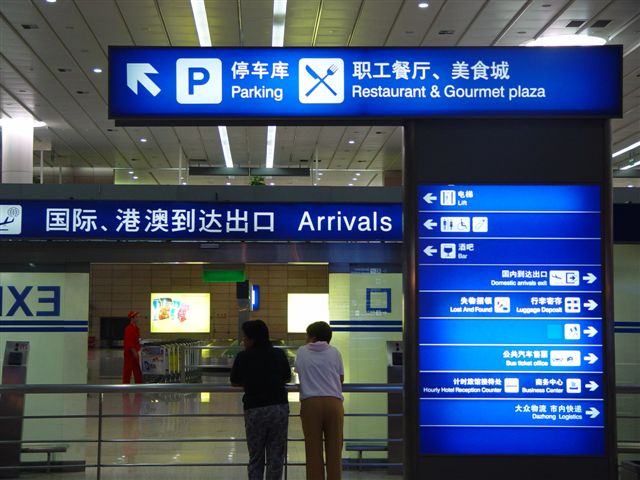 The two persons were waiting for their friends coming out of the gate. Below is the picture looking into the gate when it is open – you can directly see the luggage claim area. 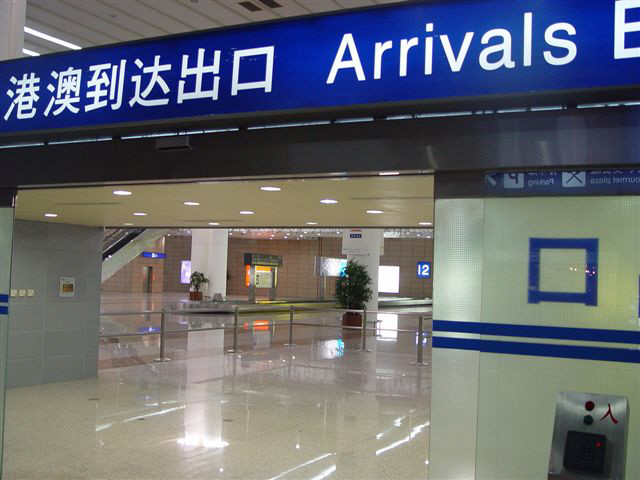 Wait there and you will not miss anybody coming from outside China (including Hong Kong, and Macau) to Shanghai via PVG. Please note that the domestic and international sections of the airport are seperate and there is a domestic arrival gate for domestic arrival like this too.

There will typically be a lot of people waiting there and the gate will be crowded. Lots of them will holding a large name plate for the friend they will pickup.

If you don’t feel safe enough, you can agree to meet at certain gate. For example, gate 18 is a good choice since it is just at the opposite side of the arrival gate.

In the next few days, maybe four days, I will leave for Huang Shan – or the Yellow Mountain in Anhui Province in China. We have been there serveral years ago, but it was raining and frogy.

I came across you website and found it quite helpful. Thank you for all the information.

You mentioned that the Maglev train to airport will be operating in October 2003.

1. Do you have any updated information as to if it is already in service, if not when exactly.

2. Where does the service run between? both ways, or only one way from the airport.

3. If I stayed in a downtown hotel, like the Peace hotel, Is it a good idea to ride the train and transfer to a taxi after the train? or I’d be better off just getting a taxi from the airport.

Thanks for the questions. Maybe infected by the recent accident in the construction of the maglev, the operation date has been postponed. There is no settled operation date yet. So the date Oct, 2003 is no longer accurate.

Below are the photos of the Maglev I took before. I personally love the photos very much.

For the second question, the designed service is, of cause, both way – from the airport to Longyang Rd. and return. But currently, it opens for tourists only and not formal operation.

According to Sina.com, two trains were put into operation in the National Holiday. One has 5 carts and the other has 6 carts. The capacity is 10,000 people per day.

However, don’t expect to take a ride if you come to Shanghai Pudong Airport. It opens for tourists only. That is, it will start from the Longyang Rd. Station, rush to Pudong Airport and return immediately without opening the door. People will get onboard the train and leave the train at the same place – Longyang Road Station.

So the answer for the third question is no. The plan is just impossible since you cannot get on board the Maglev at Pudong Airport Station. You need to wait until the Maglev start formal operation.

National Holiday night is always the most crowded time in Shanghai. In 2001, I still remember the unbelievable night on Oct 1. At that night, Wendy and I went to the bund, but was only be able to reach the Shi Liu Pu port, which is still 1 km away from the bund, or Nanjing road. People were pushing each other. In the history before, the largest capacity in bund was 0.4 million, however, 1 million people gathered there. It was absolutely impossible to find a taxi or get onboard a bus. The metro was closed too. We walked all the way back to Xujiahui….

The major difference for National Holiday this year is the popularity of national flag. Most of the stores are hanging national flag before their doors. This was not that popular the year before last year (I was not in Shanghai last National holiday). 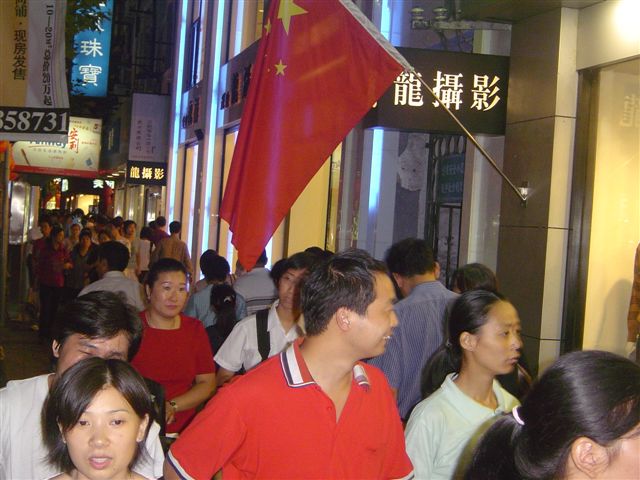 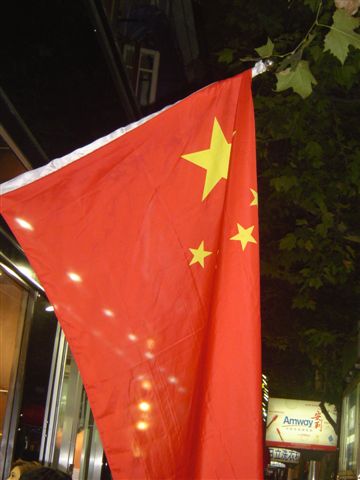 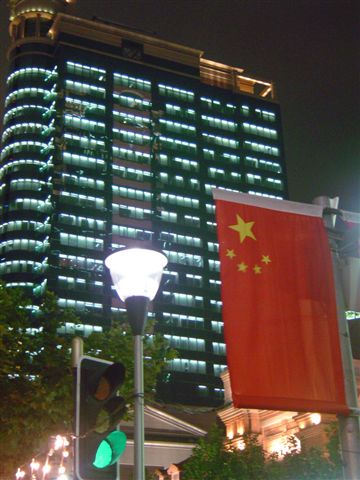 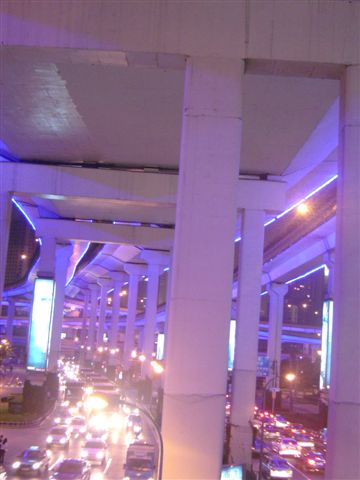