If you want to enjoy easy and relaxed trip, and you are not interested to save money at cost of time, just directly fly to Hong Kong from anywhere in the world. However, if you want to get there with a budget trip from mainland China, to visit Hong Kong via Shen Zhen is a cheaper choice. You can experience the KCR (Kowloon Canton Rail) and Hong Kong MTR (Massive Transit Rail).

I went to Hong Kong via Shenzhen. The ticket to Shenzhen I bought one day before the departure was 790 RMB (55% off). If I directly fly to Hong Kong, it is more than 1400 RMB for single trip. (Wendy bought the promotional package from Shanghai to Hong Kong and it is 1660 RMB for round trip). From Shenzhen back to Shanghai took me 700 RMB only.

Here is a route map I created based on my memory. I didn’t refer to a map when I created it so its anything but an accurate map. 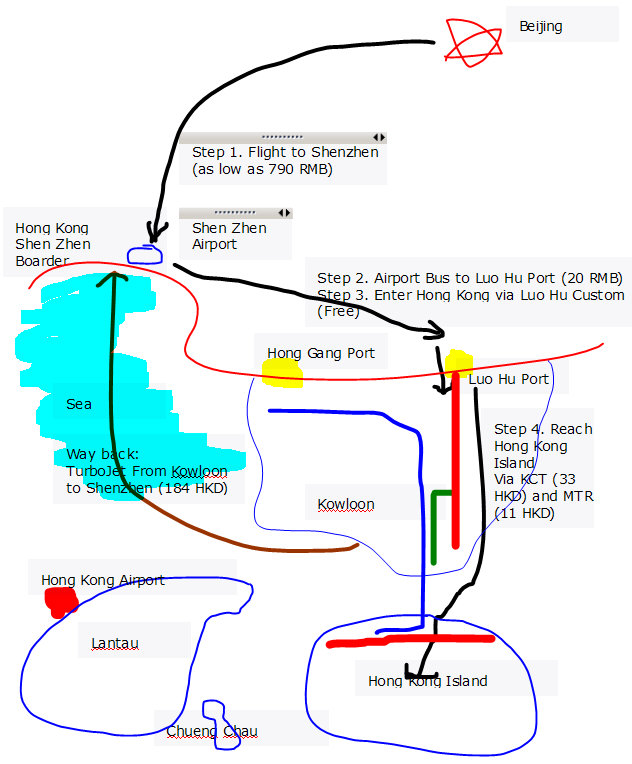 It is said the Shenzhen airport is 40 km away from the Luohu Custom Port. I took airport bus there and it took 20 RMB and about one hour (maybe 40 minutes, I do not remember). After I left the bus, as I expected, I was very confused since there is no single sign pointing to the destination many people are interested – the Luohu Custom Port, the gateway to Hong Kong. I asked four persons to find out my way to go to Luo Hu Custom Port. Two pointed to the right direction, one gave me the wrong way on which I met the forth person who were looking for Luohu too. She confirmed at least the way she came from is the wrong way so I turned and continued seeking. Later, when I approached the entry to the custom building, I finally saw the first sign pointing to Hong Kong – the typical Hong Kong style black bordered sign.

1. After you get off board the bus, turn left and go directly along the street for 200 meter.

2. Get to the over-head pedestrian bridge and go upstairs.

Passing the customer is easy. Now, mainland residents still need a special Hong Kong/Macau Entry Visa to cross the border. There are not many people if it is not weekend. It took about 20 minutes to me, but others suggest to plan one and a half hour for it.

After getting into Hong Kong, I don’t need to talk about the route since everything became very easy and there are volunteers to help. Get onboard the KCR train (almost the same train like MTR), and transfer at Kowloon Tong (the only station) to MTR. After you reach MTR (or subway, or Metro), you can reach almost every corner of Hong Kong Island and Kowloon.