I packed my Dell Latitude X200 into a very small bag and got out of the Metro Tower. The trip destination this time is the metropolitain of Guangzhou. It was very cold outside and rained a little bit. To warn other travelers to Shanghai, I just hang up a weather meter onto my homepage. I only wore a shirt and a suite, expecting the temperature in Guangzhou should be much higher. So I was freezen there.

It was about 12:45 at noon when I was looking for a taxi. There are two red taxis waiting before the Metro Tower. I didn’t take them. Remember the advice from a senior taxi driver? “Avoid taking red taxi in Shanghai.” I partly agree. Although I have some very good experiences to take the red taxis, most of my the unpleasant experiences also happens in those taxis. So to be safe, I follow the rule of avoid-taking-red-taxi strickly now.

Background Information: Why Bad Shanghai Taxis are All Red.

Do you know why they are all red? 10 years ago, there is no standard color for taxis. Later, Da Zhong taxi changed their ID color from many to one color – red. It is very effetive at that time. People knows the color and would like to take red taxis. But things changes rapidly, all the taxis begin to draw themself as red since Da Zhong cannot prevent other company to draw their taxi red. About 4 years ago (not sure though), Da Zhong decided to use only one model of car from Volkswagen. They also reserve the right to use Turquoise. So now, if it is a Volxwagen Santana, and the color is Turquoise, it will be a Da Zhong taxi. No one can buy Turquoise Santana any more.

Now, most big taxi companies in Shanghai have choosed their visual identification color other than red, like Yellow for Qiangshen, White for Jinjiang, the smaller taxi companies are left with the tradition color – red.

I quickly walked into the rain and waited for a slow guy to get out of a white taxi. Then I rushed into the warm cabine. “Does a good brand mean so much for a customer?” I believe managers at Jin Jiang taxi will be happy to know a customer even wanted to wait in the rain to take their taxis. Of cause, they will be unhappy if they know that I choosed white taxi because another turquoise taxi was just occupied so I have to choose them.

Well. Enough odds and edds on Shanghai’s taxi. I love to talk about taxi, tickets and taxi driver since no other industries in a city react to news/events/emergencies as quickly as taxi does. Just take a look at the SARS period. Taxi drivers are telling the most vivid stories of the event. BTW, a taxi driver complained about drop of money made by 30% percent because the government has just closed all the entertainment venues (KTV, Massage) for investigation for 20 days. Taxi drivers, again, felt the pressure first.

Whenever it rains, the traffic of Shanghai is a mess. Cars, buses, rain-coat covered bicylers are craweded and fighting with each other to get the right to occupy the narrow roads. Fortunately enough, the taxi finally got onto the evelvated highway (the inner ring road) and then turned right to the Lupu Bridge. After that, I was quite asured that there will be no traffic jams on the road ahead. There wasn’t a single red light from the point to the Pudong Airport.

Running along the A20, I suddenly felt as if I were in U.S. The road infrusture has been well estabished with international standard ramps and signs. Even the name of the road was changed from Chinese names to numbers and alphabetics for easy of use for foreigners. The car was running at 100 km/hour…. The difference is, the field along the roads was still empty. When more and more families have cars, these areas should be developed very quickly and lower houses (not apartment) will grow to wherever roads extend – live virus….

The rail of Maglev road runs side by side with A20 and then along the A1, which connects the A20 (the outter ring road) to the Pudong Airport. I didn’t see a train running on the rail since it operates only on weekends now.

It took me 140 RMB for single trip from Xujiahui to Pudong Airport – it should be only 130-135 RMB in sunny days. The waiting on the jammed Tian Yao Qiao Rd. cost me 5 RMB at least. There is a nice KFC at the Maglev station, 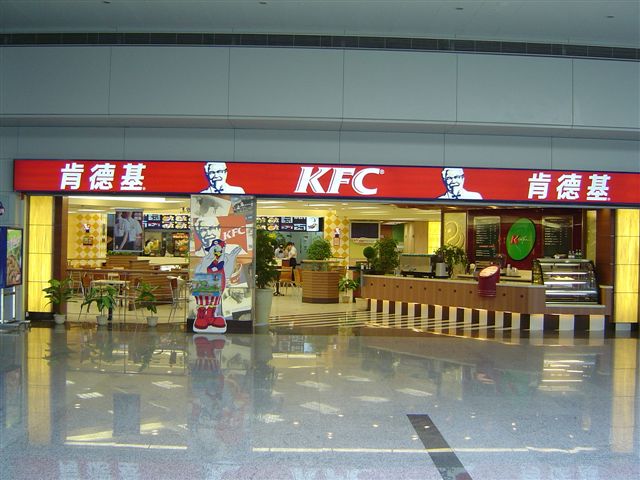 . I had my lunch there. The growth of KFC is much stronger than that of McDonalds in Shanghai, maybe also in China. They opens a lot of shops in places that has good potential. There was one in Minghang by the SJTU already. Maglev hasn’t started operation yet. The business was not that bad. Almost all the tables were occupied. Most of the customers were young professionals serving the airport or airlines.

I didn’t have much time for me to wander in the airport. Otherwise, I would have gone to see the Long Distance Bus Station and take some pictures to answer the questions like “Where can I take bus from Pudong Airport to Ningbo?….”

I used my China Eastern Airlines(MU) Frequent Flyer Program card to check-in. MU has a very nice notification system. About 20 minutes later, I got a SMS to inform me that the credit for this flight had been added to my account. Very cool. It is some of the very few good experiences SMS brought to me.

I had a nice seat at 3A on the plane, which is the first row of ecomonic class. There was large room before the seats so my legs can relax. I will ask for such seats in my future trip. On the plane, I read an interesting book Business the Yahoo! Way: Secrets of the Worlds’s Most Popular Internet Company. Nice book. I didn’t know, or at least I didn’t realized, that Yahoo!’s success highly depends on the success of partnership. Most of the content and some of the technologies are provide by its partners. It is something like Google now. By seaching the book title at Amzon, I found the Google AdWords has been seamlessly integrated with Amazon already under the Customer Interested in (book name) also Interested in section.

I found a rule of thumb to choose good books for me. Books cheaper than 15 RMB (2 USD) in China are typically interesting books. The more expensive, or thicker the book is, the useless it will be, because I will never find time to read the whole of them.

The reason I read this book is that I am thinking of the following questions recently:

Thanks Cyril for giving me many advices but I’d like to hear more feedbacks on that. I am just a little confused and don’t know what is the next step. At least, I enjoy writing about the city and the life. I also enjoy reading my pass posts – each single piece of them reminds me of the “old happy times”….

Thank God. Guangzhou is much warmer. It is at 23N 113E. 19 degree south of Shanghai. I have heard enough terrible stories about bad security in Guangzhou, so I kept my bag as closely to my body as possible and paid enough attention to people around me. There is a joke to compare the security level of Guangzhou and Shenzhen. “Your wallet is not safe in either Guangzhou or Shenzhen. But the difference is, it will be stolen in Shenzhen but be robbed in Guangzhou.”

4 thoughts on “Flying to Guangzhou on A Rainy Day”