I just returned from the film Matrix. I did hesitate for quite a while before I decided to pay 60 RMB to the Kodak Theater at Metro City to see the film. After I get out of the theater, still having all the stories in my mind, I have to say, I will make the decision to see it again – it is just fanatics. It is a good practice to go beyond imagination and a good test of one’s logic ability. 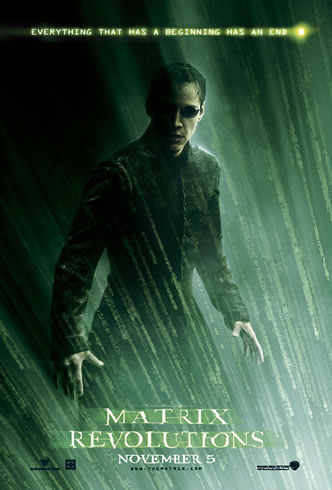 My friend XGAO who came with me to the field give a very good analogy to understand the Matrix.

In the Matrix I, actually, it is tell a story just like the current online PRG games:

The game fans eat and sleep in a small room with a computer terminal. They have their roles in the game – the virtual world: soldier, farmer, ghost, etc.. you name it. They don’t have any real relationships in the real world. They talk, live and work in the online games.

In Matrix, it is exactly the same. However, it is more ugly. Human beings are not treated in small rooms – they are put into tubes without being aware of. :-) What a good design.

In the online games, all the human player follow the same role – you have to fight to gain strength points. You have to work to gain money. You need to at least walk around to gain experience. The increase in the value needs your work.

When two persons fight, the one with higher strength point win. Pretty fare – just like the vitural socioty in Matrix. No one will notice it is actually a program.

From the perspective of the players of the online game, sometimes they will find some roles that cannot be defeated. They have the highest power possible – out of the imagination of human being. There is no human behind these roles – they are programs. This is the matrix.

If there are some people who don’t want to follow the rule, they will great some kind of add-on or hacking scripts to falsefully increase one’s power – to be super man. Computer hacks can do it in online games. In the film, these group of people are Neo and all the human beings. They find ways to disobey the rule the Matrix (online game operator in real world) designed. So the Matrix is going to find these people and kill them. This is the story told in Matrix I.

Actually, Agent Smith is exactly the computer virus in online game system. They gain power and duplicate themselves. It is out of the control of the whole system and will eventually ruin the whole system – alone with all the virtual lives in the system. This is what the system operators (in the analogy – The online game operator (like Sina or Netease in China)) don’t want to see.

Since Agent Smithes get stronger and stronger, there are three parties in the game – the matrix, the human and the virus. The matrix accepted Neo (the hacker)’s proposal of peace. The Matrix can only rely on the hackers to remove the virus (Agent Smith) from the computer system. So it stops attacking the human being after Neo did the job.

Oracle is also part of the system who is in favor of the hackers.

Thanks for XGAO for the great analogy.