Believe me. This article is the most in depth one on the topic of Maglev of Shanghai Pudong Airport. I have talked about Maglev before in these two articles: Maglev Operates in Shanghai and Ticket for Maglev Tour. Here are the Maglev pictures I always planned to take.

Below: Before I see the real Maglev train on the rail, the large advertisement of Maglev on the way out of PVG (Pudong Airport) has attracted my attention. SIEMENS is famous in China but the name of ThyssenKrupp was heard only when Maglev is mentioned. I believe most passengers will see this Maglev advertisement when they just get into a cab or his car and drive out of PVG. 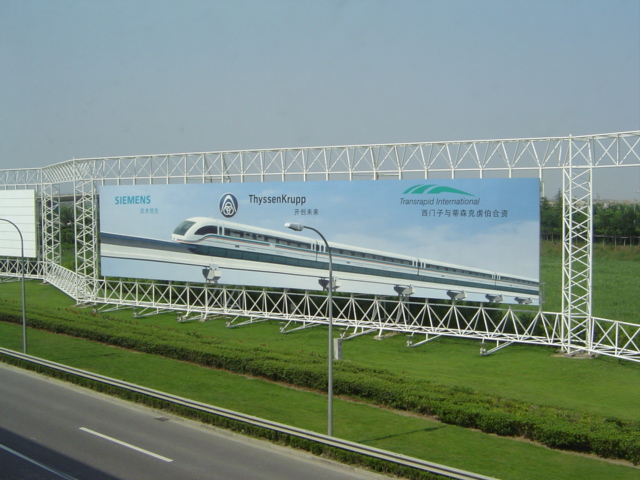 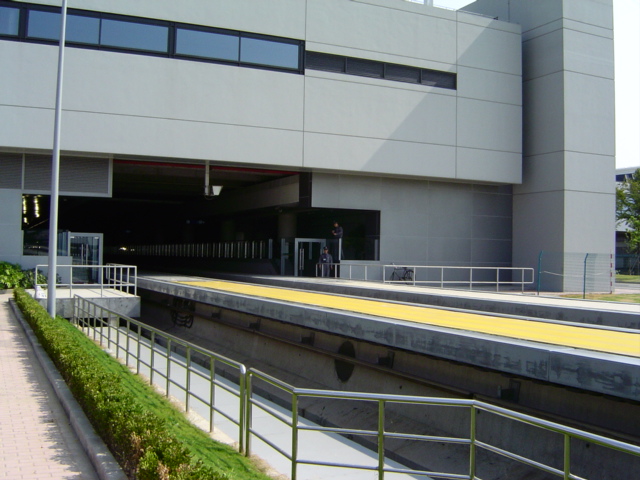 Just before I turned and started to go away, a Maglev train started from the station and headed to downtown Shanghai. I quickly pointed the camera and took the picture below (My first Maglev picture). The head of the train just got out of the station. 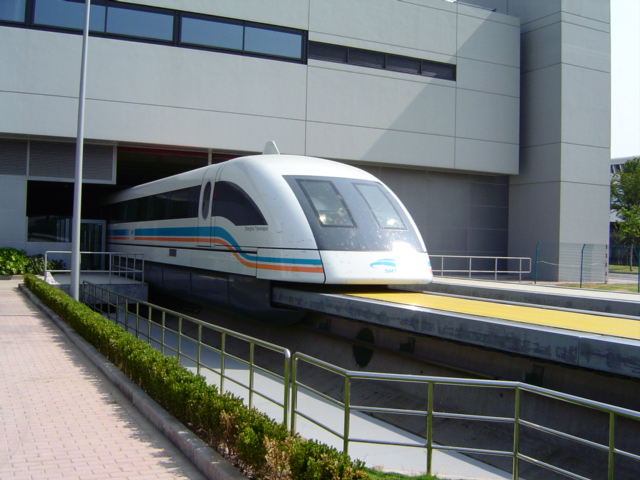 Below is a series of pictures showing the Maglev train moving away. 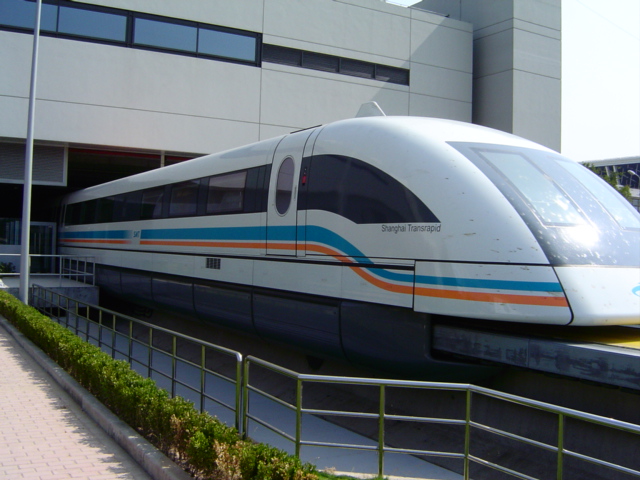 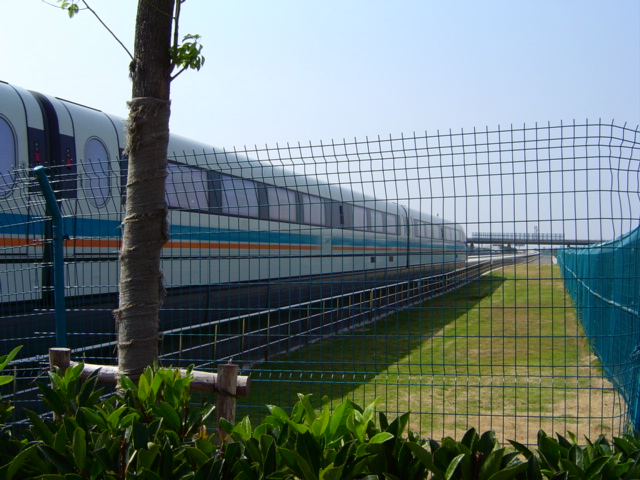 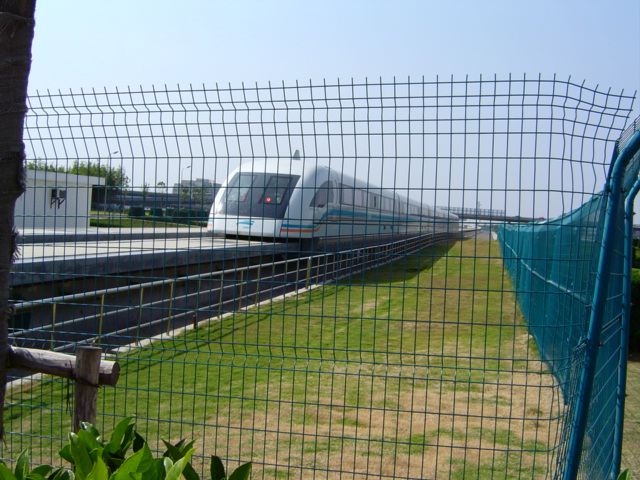 The startup speed of Maglev is not very fast, but it just disappeared before I can see the train clearly. 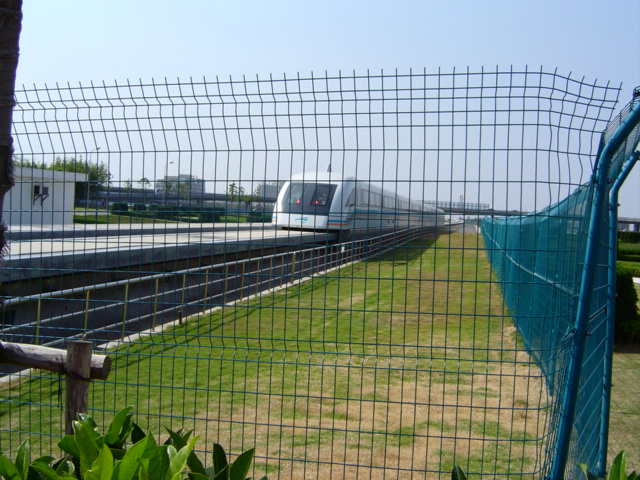 Maglev left station – far away from where I stayed. © Jian Shuo Wang 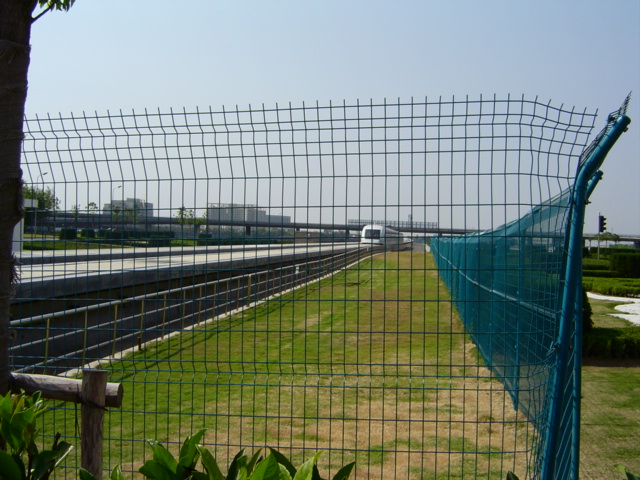 Later, I found the train would pass the station and reach the other side of the station, stay there for about 2 minutes and then move back into the station, take the passenger and go for the downtown direction. So I have plenty of time to take more pictures for this most advanced train in the world. You can see the Maglev train is parking near the tower of the airport. 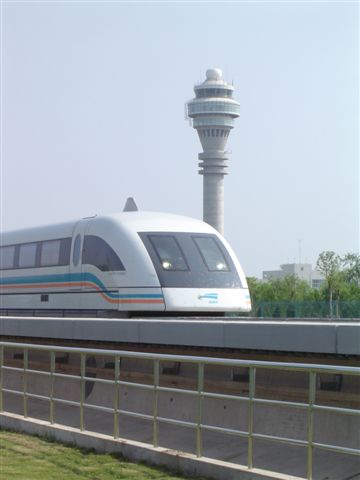 Maglev and the control tower of the Pudong Airport. © Jian Shuo Wang

The same picture with horizontal view. 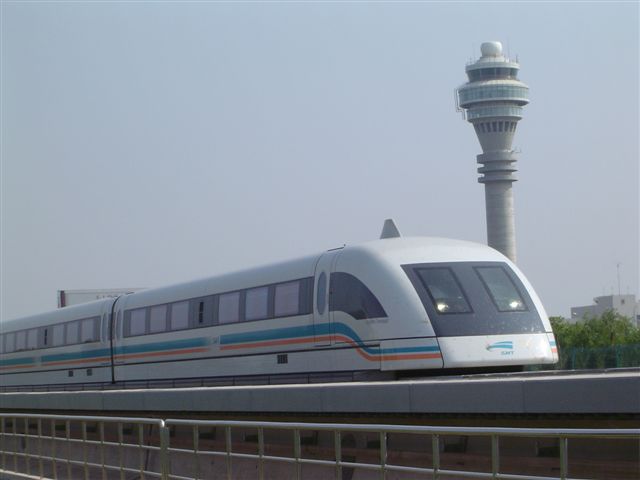 The above two Maglev pictures were quoted in some books and TV commercials (in Japan).

From the picture below, you can clearly see the head of the train and the “Shanghai Transrapid” mark on the Maglev train. 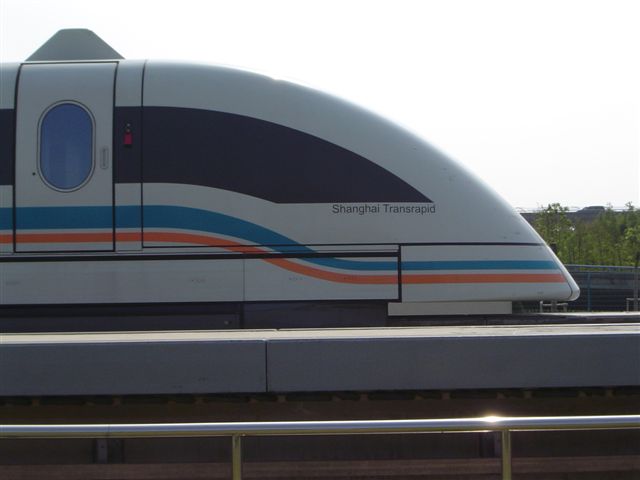 Maglev with Shanghai transrapid on the train. © Jian Shuo Wang

This is the cart for the train. It seems the seat in it is very comfortable. I didn’t get into the cart yet since the ticket price for the tour (before it officially operate) is just too high. (Update: The price was cut twice and now it is 40 RMB for single trip if you hold the ticket of the flight of the same day. Aug-2007) 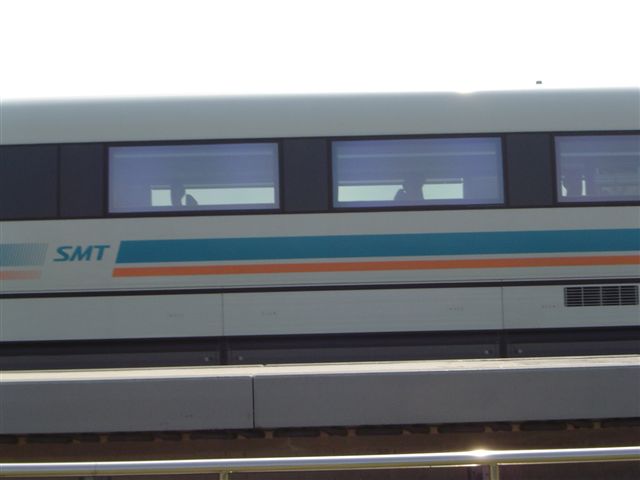 The over head bridge connecting Pudong Airport and the Maglev station. 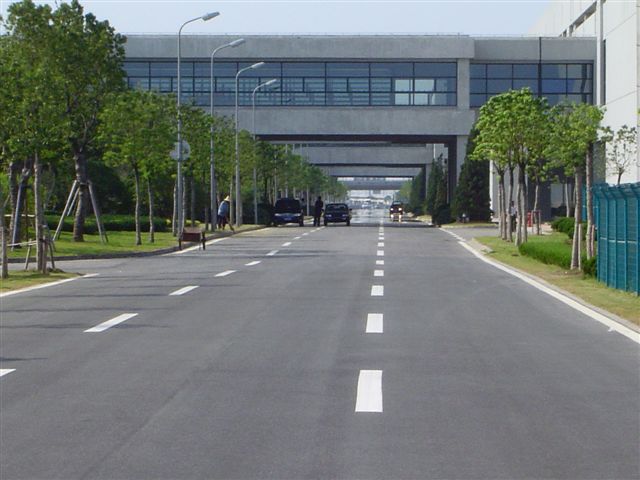 Below: This is the end the Maglev’s railway. The huge installation and testing cart was parked on the right railway. 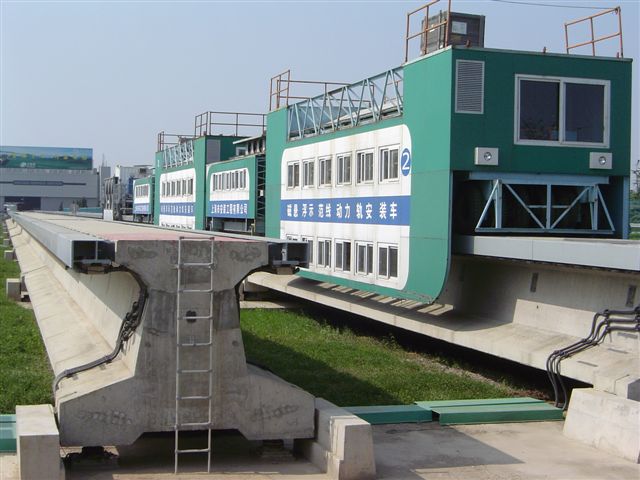 Below: More details about the huge machine. 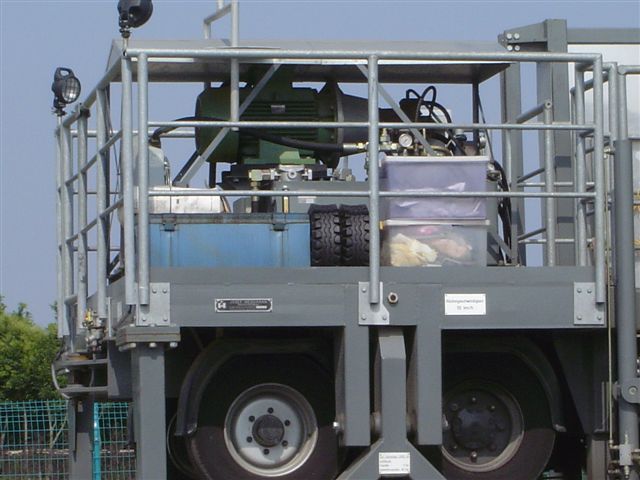 Looking from the other side of the railway. A big german guy was working on the electronic equipment near the train, but I forgot to take a picture for him. 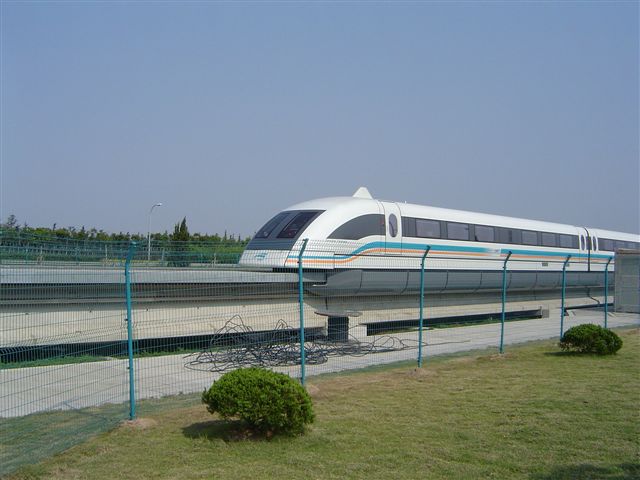 The lovely tree before the Maglev station. 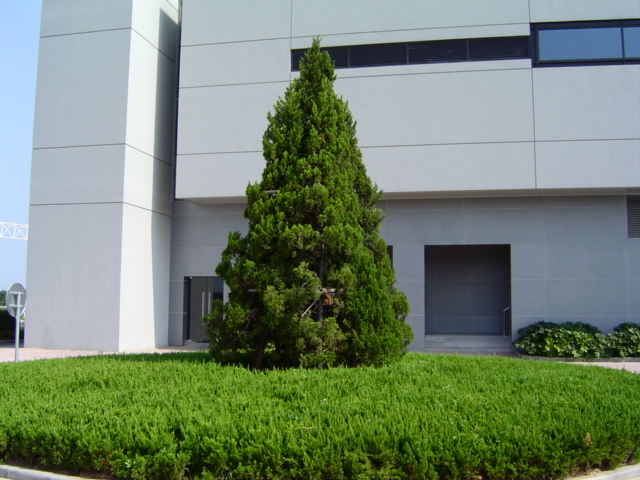 I hope the Maglev train will operate as scheduled despite of the recent technical difficulties.

Note: Please give credit to this site if you want to use any of the picture. Yes. I grant anyone the permission to use the pictures on this page as long as 1) It is for non-commercial use. 2) Links back.

According to this letter from the CEO of American Maglev,

The German train is a testament to great technological innovation, but it is indeed very expensive. Based on the experience in Shanghai, the cost of the German Maglev technology would be much closer to $60 million a kilometre than the $2 million suggested previously.

Wow. Is it true? The cost of Maglev seems to be a national secret right now and I cannot find any information on it.

According to the Morning Post, the MagLev will begin trial business operation from tomorrow (Oct 11, 2003).

Although the sightseeing tour of Maglev has been operating for about half year, tomorrow is the first time the Maglev drop passengers at Pudong Airport – which means passengers will be able to use the Maglev for transportation propose only, not just for tour.

Maglev started daily operation already. It operates from 8：30 to 17：30 at interval of 20 minutes. The ticket price for single trip is 50 RMB and 80 RMB for round trip.

Also on this Site