In our Australia trip, Wendy and I stayed in Ibis hotel – in Sydney, Brisbane, and Melbourne. We found out ibis is a great hotel – it has everything a casual traveler needs.

Now, with the competition in the budget hotel market heat up in China, not only local brands like Home Inn, Hanting, and Motel 168 is joining the competition, international brand like ibis also joined.

Image in courtesy of ibis hotel

The ibis I saw in Beijing is at Sanyuanqiao, the intersection of the third ring road, and Airport Expressway – just behind the Metro Line #10 Sanyuanqiao Station.

This is the 5th ibis in China and the first ibis in Shanghai. Tonight, when I visited the Liangyang area to have dinner, I saw it for the first time 0 the Lianyang Hotel. The logo of ibis is very visible in the dark night. According to its website, it opens in Sept, 2008, which is these days.

Here are the locations of ibis hotel in Shanghai:

The price it shows on its website is 348 RMB including tax per night. It is significant higher than Home Inn (which offers 200 RMB rooms), but with the international brand recognition, and reasonable price compared to five star hotels, it is still very cheap.

According to ibis website, the following ibis hotel will open in China this year:

In case you also enjoy ibis in many other international cities, you will be happy to know there is ibis in Shanghai too. However, I would love to see how it can compete with local budget hotels, and what is the result… I remember I read a report about its competition with Home Inn in Chengdu

At the very beginning, there is one ibis and one Home Inn in Chengdu. Soon, there are 10 Home Inn, while there is still one ibis there

Let’s see what the French hotel giant Accor is going to do with ibis.

P.S My Photo of ibis in Downtown Sydney 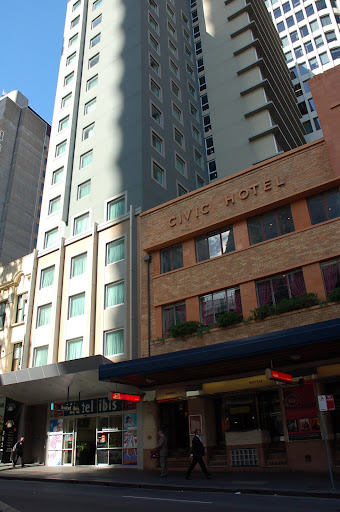 Photograph by Jian Shuo Wang. Ibis is the white one under the Sun