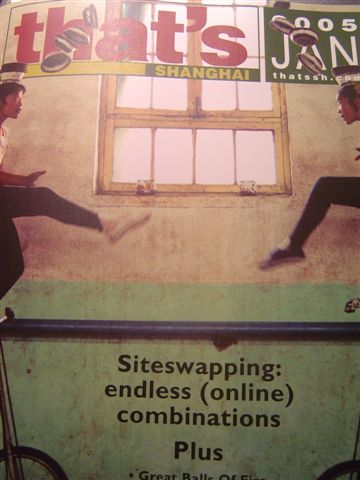 The cover story of this issue is called Siteswapping – the infinite links to Virtual Shanghai. Written by Christopher Cottrell, it is an article on how blogs and other English websites are helping foreign people in Shanghai. My blog was featured in this article. I quote part of the article here. Follow the link to read the complete story.

Philippine-born JM couldn’t take it any more. Her new job as manager of an events company was high-pressure personified. But getting to the office and back home – a nerve-racking hour and a half bus ride through Shanghai’s mean streets – left her ragged and worn before the day’s work had even begun. She needed help, and she found it online. At wangjianshuo.com, she clicked on a link that discussed the city’s transport system, which led to a quicker bus route, which in the end cut her commute in half. Another link, to shanghai-ed.com, provided info on the city’s restaurants, which led to another site, which

Well, you get the idea.

Welcome to virtual Shanghai, where new and long-term residents alike can instantly find information on just about anything. Where one link leads to another in a seemingly infinite series of combinations. Where communities connect.

That such combinations are possible is entirely due to a small and dedicated band of tech-minded wizards. Like Wang Jian Shuo, founder of the eponymous site, wangjianshuo.com, one of the most visited blogs (websites with personal commentary) in Asia.

Originally from Henan, Wang works as a consultant for Microsoft. He launched the site four years ago with a story about the opening of the Pudong International Airport. In a short time the site became Google’s number one hit for searches on the airport. Over the next two years, Wang expanded the site to include in-depth information on Shanghai’s metro, trains, taxis and airports, making it the most reliable source for local transportation advice. Today, the sites averages one million hits each month and has been lauded by BBC, MSNBC and Salon.com. “The original idea,” says Wang, “was to help foreigners understand how to get around Shanghaithe streets can be very chaotic and lifestyle very different from their home countries.”

That idea has grown to include information on everything from finding a room to rent to help wanted ads for fly-fisherman. In addition, the site provides links to personalized Mandarin language sites – wangchen.com; pgao2003.com; Lijia.biz; 9718.net; and run2me.com – and interesting personalities in Shanghai, including Wang, who lists his hand phone number for those who want personal assistance.

Given the sophistication of Wang’s portal and its time-consuming upkeep, one might wonder why he doesn’t seek reward for his hard work by seeking site sponsors or advertising.

“My philosophy is not to make money but to be respected and be considered a good guidehelping other people is my deeper reward and the satisfaction that brings,” says Wang.

I’d like to thank Jelly for participation the interview of That’s Shanghai. Thanks Christopher for creating the article. That’s Shanghai is the No. 1 magazine published in English in Shanghai. Other interesting English language magazines are Time Out, Shanghai Talk and CityWeekend. The only one you can read in all Starbucks is CityWeekend though.

At the Website Review section of this issue, John Pasden reviewed Wangjianshuo’s Blog and claimed that “… It’s almost as if he’s being paid by the city to produce the website. Why else would he create an awesome (Chinese only) interactive online map of SHanghai? Why else would he write up detailed descriptions of what you can find outside each subway stop? Wei renmin fuwu (Serve the People) seems to be his credo.” Pretty correct guess on the second part, John! For the first page, I hope the government sponsor me and make the city more accessible for people from outside China. 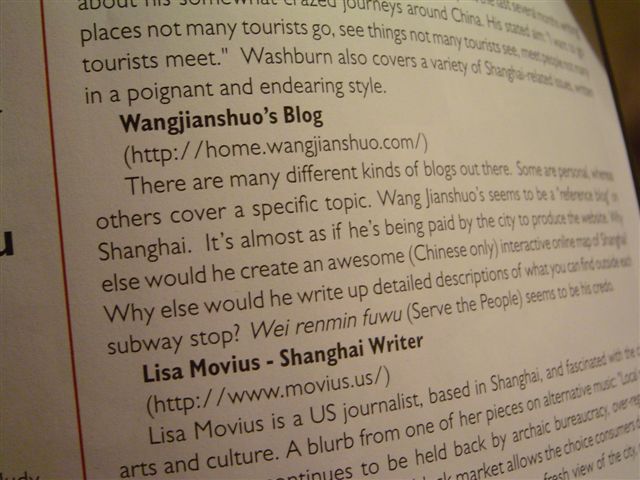 4 thoughts on “Featured in That’s Shanghai”