This is the experience I got in my last two years and a quarter of blogging. The nights I wrote helped me to form a habit to keep doing something for really long time. :-D

It doesn’t matter how well you are doing today or tomorrow, it does matter if you keep doing something right, for a pretty long time.

I am very happy to share a piece of behavior art I created in a party. I am very excited about it and proud of it.

I attended a new year party in the Shanghai Science and Technology Museum last Saturday night. It is the site where the APEC meeting leaders took pictures. There were many people there and it was a looo0ng party from 6:00 PM to 10:00 PM. There were many things to do in the first one hour or two – eating, drinking, and chatting. For the rest two hours, to be honest, there were not much to do besides watching the performance on the stage – it was interesting anyway, but I found something more exciting for myself.

The party was held in a hallway of the museum. It is the highest hall in the building. Look at the picture below. I wasn’t able to put the roof into the viewfinder. You may have some idea about how high the roof is. Actually, I took the picture at a viaduct that goes across the hall at the second floor. :D 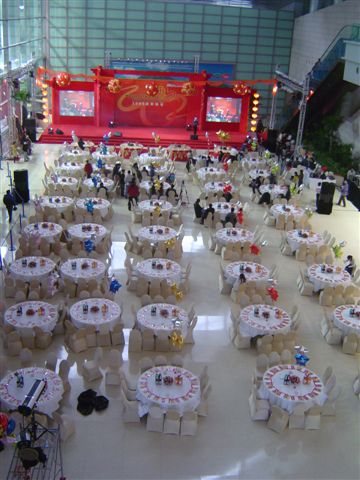 The hall of the party

To add the holiday atmosphere, balloons were placed on each table. They all floated in the air.

There are strings of about half meter long attaching the balloons to the tables. The good thing is, the string was made of plastic and I can break the string in the middle along the string to get two identical strings with equal length but half thick. You can work on any of the resulting string to extend the total length. You got the idea?

Since there was nothing to do, why not create something? Why not try something new? I thought of a crazy idea.

IF, I mean if, I kept breaking the string and it will result many strings with identical length. If I connect them, and it will be very long. Does it make sense?

OK. Let me continue. After I had a long enough string, I can put it under the balloons so the balloons can reach the roof.

Everything is so reasonable, isn’t it? Why not have a try?

So I started to do it.

The work is not that easy. The first problem I had was about the string. It was hard to break it just in the middle. If you start to split, one piece of the string got thicker and thicker while the other one get thinner, so it broke at lengths about 20 cm to 30 cm. I changed the plan and broke one original string into up to three thinner string. To do that, I had to work very, very carefully. Otherwise, it broke faster.

Anyway, I combine the thinner strings into a longer one and kept attaching the smaller piece to the end of the string.

Gradually, the balloons of my table, out of the 40 tables, rose. It rose so slowly that no body noticed that. Even I couldn’t observe its moving in short time period.

Soon all the original strings were used up and I started to find some shorter strings on the table to continue the work. Sometimes a short string that was not longer than a finger was also used. Since after 3 split, it could be significantly long. Some part of the resulting long string was so thin and weak that if you had pulled the string a little bit quicker, the string might break.

The Most Difficult Time

After working on this project for one hour, I still didn’t think anyone noticed what I was doing. The balloon rose higher, but only at about 1/5 of the height of the roof. The worse thing is, all the strings on my table had been used up, including those very short one. Well. Since I started, since there was nothing else that made me so exciting and ambitious, why stop?

Others Noticed and Helped

The good things, at this time, someone would notice what you were doing if the work was getting its shape. Although it was still far away from the goal I set, the balloon on the table was about 4 – 5 times higher than the other tables. This raised interest of people sitting at the same table of me. Wendy, Xiao Gao and Qiang were among them.

They offered help and I welcomed them to join the Balloons Hit the Roof Project. With three more pairs of hands, the work went on much faster. Gao helped to gather strings from other tables while Wendy soon became a experienced string breaker. New longer strings were handed to me continuously and the balloons rose at a faster than any time in the pass hour. That was great!

With the rising of the balloon, we had new ideas. Xiao Gao suggested to attach a small flashing object at the bottom of the balloons so everyone could see the balloons more clearly. It was a great idea and we tried that. The downside of this idea was, the flashing toy was made of steel and had battery in it. It was heavy. To give enough lifting power to float into the sky again, I needed more balloons. A boy around 10 in age joined the project and volunteered to get more balloons for us. I know it was not easy because not many people want to give away the balloons on their table. The little boy finally got it and ran back and forth until he collected 5 more balloons. Cool boy! We finally had a large spacecraft with electronic power attached at the bottom. It was very cool. 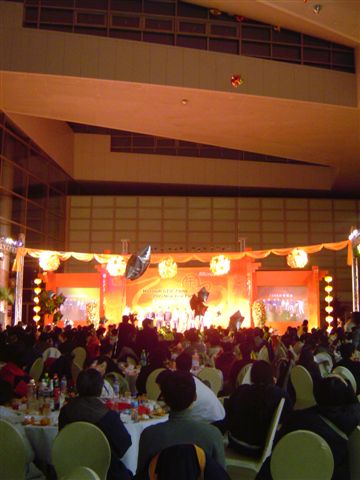 None of us would expect the air above the closed hall like that in Shanghai Science and Technology Museum was circulating. Some times, it went from one direction and later, it went another. The balloon was not directly above our table after it reached about 2/3 of the hall’s height. It either floated this way or the other, causing the string below it to be a 45 degree angle with the horizon line. We obviously need to add more lifting power to fight again it. Otherwise, some one who stood at the viaduct, where my first picture was taken, may be able to touch and destroy our work. :-D The boy helped us to accomplish this again. We also replaced the thinnest part of the old string I made to make sure it didn’t break in the middle.

Finally, We Made It

After another hour and a half, with everyone’s participation and well coordination, the string went long enough and the balloons were powerful enough (to provide enough lifting power). The new version of the balloon craft started its journey. It finally reached the roof! I didn’t need to hold the string and it just floated there at the roof. When I pulled the string, it could come down and return to face of our table. We had several times of “launching” and “withdraw”. It worked like a skate. Everybody involved was happy. In my eyes, they were shining. 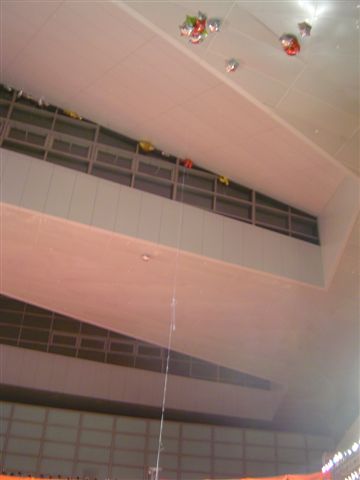 This is the final result – the balloons reached the roof with long enough string and enough balloons.

Many balloons escaped the string by accident and floated to the top of the roof. You can see those balloons in the previous pictures. People were so surprised to see a huge balloon group with something flashing at the bottom rising from one of the table SLOWLY, like the Sun. They found out the longest string in that hall under the balloons too. I have to say, it was quite impressive for everyone. More and more people noticed it, pointed the balloons to others and talked about it. I was happy that after several days, when I happened to meet an attendant and asked about the balloons, they said: “Oh. Yes. I surelly noticed that. It was among the best performance of that night. We wondered who made it?”… 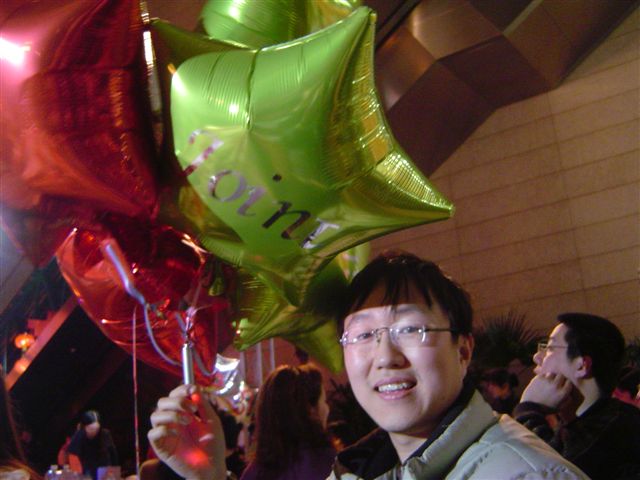 I was certainly very happy with the final result we created together. In the photo, my balloon craft and me. Please note the flashing part at the bottom of the balloons. It is flashing and when looked upward, it was brighter.

This Balloons Hit the Roof Project was made possible with the following persons: Wendy, Xiao Gao, Qiang, Chen, and the boy (I didn’t know his name). I hope they don’t have trouble for participating this project at a party after I disclose it. 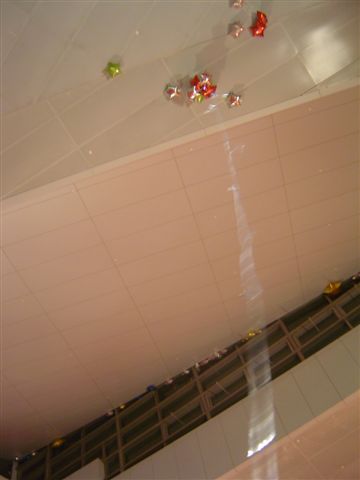 Strings under the balloons. You may notice that it was made of many pieces

Well. Thanks for reading through the long story. What I really learnt from this exciting project is, no matter how far or near a dream is, you can reach it by keeping doing, and doing, and doing… as long as you manage the risks well, and you are absolutely confident about what you do contributes to the final goal. This is often not as easy to see as “adding strings and the balloons will float higher”, we need also learn to give up when something out of control happens. BTW, I learnt the later from my last incomplete visit to 30N119E.