I planned Starbucks in a Day – Beijing Version. People suggested not to go to Starbucks because I cannot see “real” local people there and suggested me to visit tea house instead.

Well. I still think it a great plan. I didn’t mean to visit Starbucks stores only. As I stated in my plan, the distribution of the store in this city forms a route. It is the route that is interesting. I won’t enter each store and have a cup of coffee there. I will generally take pictures of the outside and take pictures along the road.

What I am really interested is the city itself. It is just a game. It forces me to visit more places. If there is no Starbucks store near IKEA at North 3rd Ring, I won’t visit that area. Chances are, I will never visit that area during any of my stay, or my entire life. 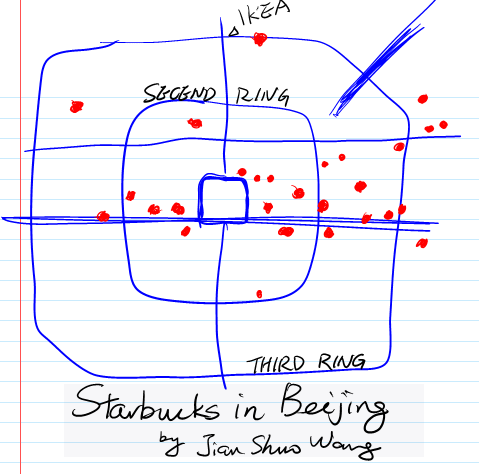 Hand drawing by Jian Shuo Wang, with the help of Starbucks Map which is available in many Starbucks shops in Beijing. First quoted here

If you look at the distribution of the stores, you will find more about the city. For example, just as this map shows, most Starbucks stores are along the Chang An Street (the central axis of the city), and there are more stores north of the street. If you count the numbers, 17 of the 28 Starbucks shore (more than 50% of all stores) are located at the quadrant I in the map (northeast part of the city). What does this imply? You don’t need me to tell you where the CBD of Beijing is located. This is definitely not a complete answer to the question, but you can find some hints behind the map, which is more vivid and solid than any market reports.

I planned to start from the northeast most Starbucks (the Air China Tower store) and walk to the Liang Ma stores, and then borrow a bike at Grand Dragon International Youth Hotel and end the rest of the journey with a bike. I will visit the stores along the Chang An Street (the thick horizontal street in the middle) till I reach the east most store near Parkson store. Then turning north until I visit all the stores in the north area and get back to where I borrowed the bike, then go back to hotel.

However, this plan has to be modified since I have moved to the northwest corner of the map. It will continue to be modified since I don’t see any opportunity for me to spend a whole day in Beijing. Chances are, I cannot find a chance at weekend in the following month. I hope the plan can be completed within 180 days from the plan..

8 thoughts on “About Starbucks Tour in Beijing”