There are rumor that all printed maps that is available in domestic market are transformed. The goal is to make the map useless for military situation to protect the safety of the country.

I heard about it but I didn’t really believe it. I thought to protect the country from foreign intelligence agents by transforming all maps available in a country is just a fool decision.

I do know that in certain Shanghai map, because of the streets in downtown is so crowded, and in other places, density is lower. So they transformed the map to cover as much as places possible while keep the downtown street clear enough to recognize.

However, the rumor is not about this specialize map. It is about all maps in China.

In most places in China, Google map has a feature to hybrid map and satellite images. I found that handy. In China, however, there are no this feature.

Recently, Google added traffic map. When traffic map overlaid on top of local map, it fits each other perfectly. If the map is overlaid on a satellite map, you see the huge transformation.

Look at this: the traffic line and the map fit each other perfectly. You see the yellow line as Huashan Road – the road before where I work, and the green thin line is Huaihai Road, and the upper left double green lines are Elevated Highway. 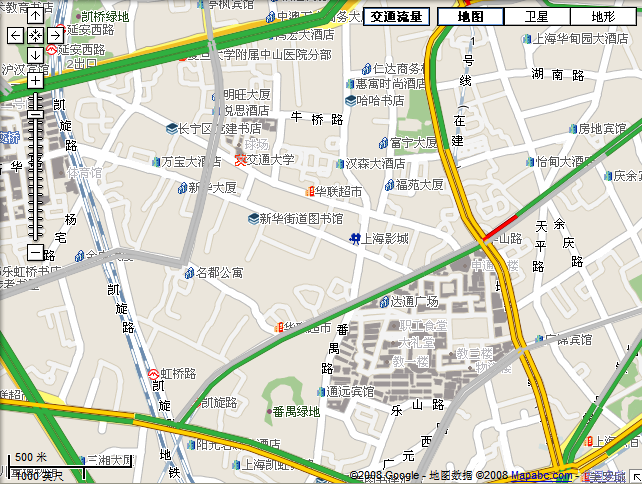 Look at this again.

The traffic lines are still there, but if you see the reality – the satellite image, you will find out the maps are completely transformed. The real Huashan Road is about 300 meters west of what is shown on the map, and the Huahai Road is actually 200 meters north of it. Meanwhile, it is not a consistent transforming – it is very random. 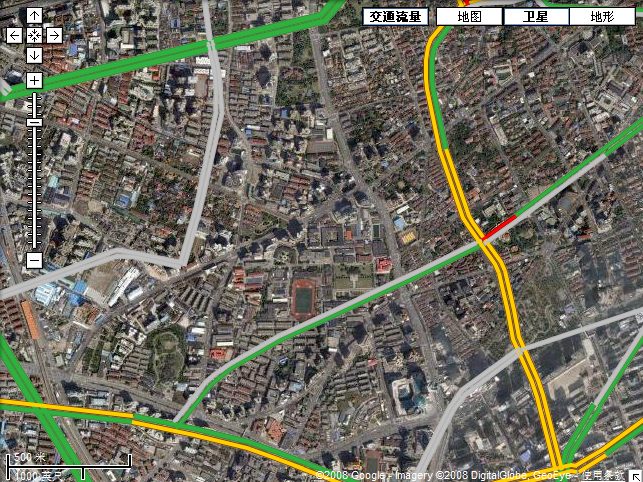 I checked other maps, and my conclusion is:

It is Not a Problem of a Map Provider

Is it the error of a single map provider? In this case, is mapabc.com, the map source that provided the wrong data? I don’t think so. I talked with Google people about this, and talked with map expert. It seems all the maps are transformed.

I Hope We Release Real Map

Civil usage of GPS was once forced to add some noises so it is not accurate as GPS technology can provide. Now, the ban was lifted, and people can get knowledge of where they are via GPS.

I don’t think today, we can protect anything just by transforming a map. It reminded me about the claim of many local "map experts" that Google maps has released the national secret of China. I think the real national secret is, how narrow minded the "experts" are.

32 thoughts on “All Maps in China are Transformed”