I start to wonder where the moral boundary is, or the ethics deadline people have in today’s Shanghai, the bigger and bigger city.

There is a way called farmer selling. It is basically to hire enough very low educated people (many of them are only children under 18) and pay them to distribute those name-card-size advertisement cards on the street. It is annoying. In People’s Square or Xujiahui, there are many and you have to hide from them, escape from them, and sometimes fight with them to go to your direction. I hate those guys.

There are some common tactics they use.

They will stand just in front of you, on the narrow street, in the middle of your way. You have to change your route to avoid run into those guy. That is the only way they bring your attention to them.

They will hand out to you with the card on hand. People have been educated not to take any cards they gave, but they will throw the card to you, put it into your pocket (sometimes they do) and try every way to stick it to your bag in case your bag is not closed. The worst experience was, someone even run to me, and opens my laptop case and throw the card into it. It seems they can easily take my laptop away. However, to take away something is robbery, but to put something in is not, right? It is just annoying.

In the morning, I see those guys in the cart of the Metro. In Long Yang station, there were not many people yet. Three boys formed a line and went from one end of the metro carts to the other, and put their cards into people’s body. Since everyone was sitting there, and they delivered their card just like a teacher in kindergarten distribute apples to children. Very soon, there are about 4 cards on my legs, on my laptop bag and on my coat.

It is insulting, I’d say.

A lot of people was angry and throw the cards back to the face of the boys. They just don’t care and continue to move, and distribute. Within 30 seconds, the whole cart was full of garbage cards already.

This situation is not new. It lasted for one month. I believe they must found the result is good, and more and more companies are doing so.

I called the Metro service center at 021-64370000 immediately and reported the spam – yes. real world spam. They said they will inform the security of the next station.

I just wonder what is the boundary of ethics in this city? If several phone calls are so important that they can throw thousands of cards onto metro and rape all the passengers by sending some dirty card onto their body, what else they cannot do for a “successful” business?

After I get off board the Metro and head to the Raffles City, a group of people are selling their Magic Water Saver equipment at the tunnel of the Metro. It is just a magnetic coin that stick to the Water Meter. Since the magnetic is so powerful that the pointers of the meter will stop to run, and the water continues to run out of the meter. They claim that with their equipment, you don’t have to pay a penny to the water company while you can enjoy as much water as you want. One woman immediately gave him 10 RMB to get one. This is called shameless stealing, right? Beside it, many people are selling fake goods. 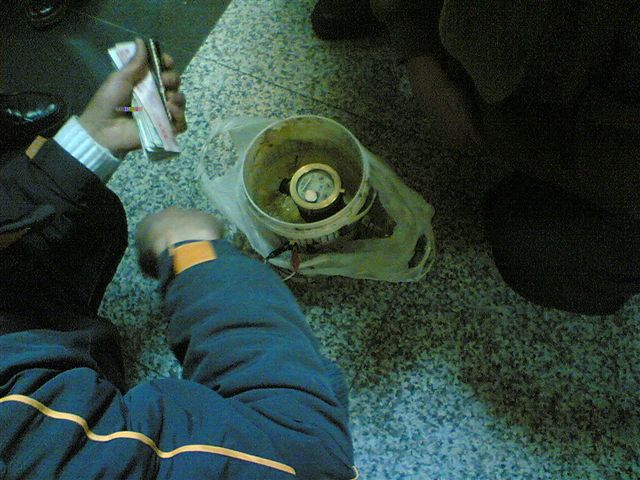 I don’t know how long these activities will last, and I am disappointed that all these are there that everyone, including me, can see it but those in charge of the security didn’t see it. What can I do? I called the police after that, but it is obvious that they didn’t got any report before. What’s wrong with the city?

Disclaimer: I don’t think it is only one city’s problem. It is part of the nature – there are good guys and bad guys, sometimes even the definition of good or bad varies from people to people. In the winter of 2004, when I was in the park near the Statue of Liberty in New York, I saw many people selling LV bags at about 20 USD or DVD at 5 USD. I don’t know whether they were offering big discount on LV or DVD or what. I saw the same scene in metro stations (42 street, for example). I was shocked to see all this happen in the States. I didn’t dare to take photos becaues I heard they may have gun. (Poor me) The reason I was shocked was, to conduct some not-so-ethical thing in public, at most crowded area but there are still not many people regulate the market. What is the problem?

26 thoughts on “The City and Its Moral Boundary”