On my list, there is one more item I would list under “the reason to love Shanghai”, because there is a great park called Century Park that we can run arround it at night, and there is a small gathering at 7:30 PM every Tuesdcay that many friends will run around the Century Park together. I am just back from tonight’s event. It was nice.

Geoffrey started the actitive about one year before, in Oct 2005. Every Tuesday, some young people will gather at the Gate 7 of the Century Park at 7:30 PM to start the 5km around park running. They have a website called yiqipao.com, which means “Run Together” in Chinese.

I spent about 30 minutes to run all the way back. Some are back within 20 minutes, and more are within 50 minutes.

Century Park Route May be the Best Route

I have no idea about whether there is a better running route in Shanghai other than this one. There is no single red light or cross road on the 5 km of route, and the route is besides green trees on one side. The length is also just right. 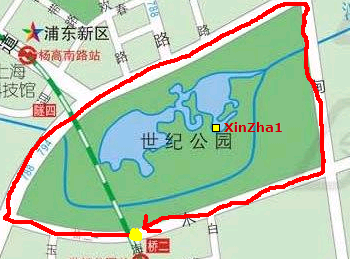 The right line is the route and the yellow dot is the starting and ending point – the No.7 Gate of the park. You can arrive there by taking Metro Line #2 to the Century Park Station, exit at Exit No. 4, turn left after you leave the Exit, and go straght ahead to cross the wider road (the Hua Mu Road). There should be lots of people there.

I checked my weight today. Unfortunately, I am almost 70 kg now. Let me see if I can stick to run for some time and see if I can lose weight a little bit.

Shanghai sometimes seems disappointing in our everyday life. Just like any city seems to be to its fellow residents. But at the same time, the same boring Tuesday, the same boring night, some cheerful people are running on the 5 km path in the peaceful night. Some comes from nearby neighborhood, some even from the Zhong Shan Park, which is the other side of the city, but everyone enjoys the running so much.

Nobody said “No” to you when you want to run. The only one who holds us back is ourselves.

On the last page, actually, the second last paragraph of the Art of Travel, Alan quoted Friedrich Nietzsche:

When we observe how some people know how to manage their experiences – their insignificant, everyday experiences – so that they become an arable soil that bears fruit three times a year, while others – and how many there are! – are driven through surging waves of destiny the most multifarious currents of the times and the nations, and yet always remain on top, bobbing like a cork, then we are in the end tempted to divide (human-)kind into a minority (a minimality) of those who know how to make much of little, and a majority of those who know how to make little of much.

How true it is.

P.S. Some pictures from the dinner after the running event. They have AA dinners every Tuesday, and it is free for first time comers. More pictures are here. I didn’t check permission to use the picture one by one yet, so feel free to drop me a line if anyone thinks not comfortable to share the pictures.

17 thoughts on “Running Around Century Park”