Yesterday, I spent 5 hours (from 3:15 pm to 8:15 pm) to visit 13 Starbucks alone the Chang An Street. I took about 3 pictures for each store. That is a long march – from the Fuxing street on the west side of the city to the Guomao street on the east. 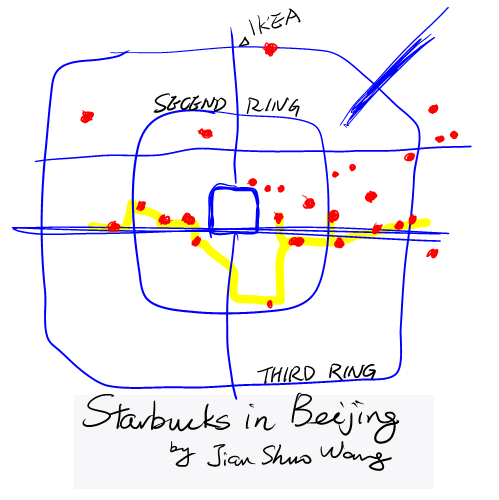 Yellow line is about the route I visited the stores

Along the way, I visited the Jianguo Gate, the Parkson Store, the Financial Street and the headquarters of major banks in China, and then visited the west commercial area Xidan, and long the street to the National Theater, and Qian Men. I even visited the south most Starbucks at the New World center – that trip was not pleasant at all. Although it is very near the heart of the city (Tian An Men Square), the south part of the city is far behind the north part.

I visited many stores, including the new Oriental Plaza, and then to Dongdan, Friendship Store and finally arrived at the China World Trade Center. It was a long trip and I will definitely find sometime to record the buildings I saw and the people I met during the trip.

19 thoughts on “Starbucks Tour in Beijing”