Skip to primary content
This is the forth, and the last article of Dr. Glenwood Irons’ trip to Shanghai.

When Daniel Defoe came to the end of his Plague Year journal, he began to meditate somewhat on the horrors he had experienced over the previous year, even to consider why he had been spared the worst of the Plague. He had indeed contracted a severe fever and was almost certain that he too would perish along with the many other Londoners who had suffered the worst fate which the Plague could dish out. However, he came out of the experience, at least in his own opinion, as a much better person that he had been. Perhaps that is the essence of such a Journal ?the wish to share with others and experience which has made us better for having gone through it.

On my second full day in Shanghai, I now felt ready for the best and the worst the city could dish out. Moreover, I felt well-armed against the vicissitudes of this modern plague, not least because I was having my temperature taken every morning before I ventured beyond the reception of my serviced apartment. So, right after the “digital check?which showed my usual 35.5 degrees (I was beginning to wonder if the thermometer actually worked!), I was picked up by a driver for the School where my meetings were to take place, and my colleagues (who had accompanied the driver) all headed off for Pudong, that amazing new centre, just across the river from Shanghai. As many readers will know, Pudong was little more than rice fields in the 1980’s, but now it is a place which rivals even the most modern Western city in its amazingly creative skyscraper architecture, its energy, and its financial power. And there is no doubt that Pudong is one of the reasons Shanghai is well on its way to taking over from Hong Kong as the “hub?of Asia.

And as if to echo the wealth of Shanghai, I was being driven along in a sleek, black Audi A6, built in an automobile factory just outside of Shanghai. One of the colleagues accompanying me is a Caucasian American, so fluent in Mandarin that he has taught on CCTV for a number of years, the other colleague is a Chinese American, with a PhD in International Affairs from Columbia University. And all of this seemed to fit well with the vastly interesting architecture which spreads out before us as we cross the Nanpu Bridge on our way to our first meeting of the day. Amazing people in an amazing city.

But of course the conversation turns to the SARS outbreak. I remark on the fact that the WHO seems to have given Shanghai a rather “easy?time of it in their report, especially as just about everyone mistrusts the low number of reported cases, and we expect the WHO to give an unbiased opinion. One colleague, recently arrived from Shenzhen, and just out of his quarantine period (all arrivals to Shanghai from hard hit areas must undergo a 14 day quarantine in their flats) suggests that his various doctor friends believe there are at least 200 confirmed cases in Shanghai, and more than likely quite a few hundred more “suspect?cases. In a city of 16 million, this isn’t surprising ?on a per capita basis, this number is still lower than Toronto — but the reasons for such “under reporting?are important to all of us. Shanghai is in fact the engine of the Chinese economy, experiencing double-digit growth in the past few years, and enjoying a prosperity which major cities in the West would envy. Under the present circumstances, with Beijing still reeling from the daily increase in SARS cases, Shanghai will likely be the only export window to the rest of world. It would be devastating to undermine that important conduit to and from the rest of China, especially right now and especially because of Shanghai’s ongoing importance as the new “hub?of Asia. So, we shall hear about a few increases in SARS cases over the next few weeks, but as Beijing eventually brings the caseload down, I suspect that Shanghai’s caseload will all but disappear from the world’s radar screen.

In any case, I spent a very interesting morning in meetings and a visit to the construction site for the new private school, a US $40 million facility which will eventually enroll 4000 students, and then turned my thoughts to more important matters, namely lunch. In fact, I would like to suggest that it is here, in the restaurants and hotels of Shanghai and Pudong that one sees the most obvious influence of the SARS outbreak. On Tuesday and Wednesday I enjoyed four different meals at four different restaurants ?and no I’m not trying to become a Sumo Wrestler, but everyone knows that eating when on business in China is probably the most important function, other than ceremonial signings ?and I noted in each one just how few customers there were. Even though business lunches and dinners are in small rooms with a round table which seats ten or twelve people ?a very enjoyable way to eat ?one still passes through the main restaurant “en route?to the private dining rooms. I would say that patronage at restaurants is down by at least 50%, and that is the most obvious manifestation of the distrust which the Shanghainese have for the SARS-related reporting. As well, of course, all service staff in restaurants are wearing surgical masks, so they too are taking no chances with the “numbers?game. 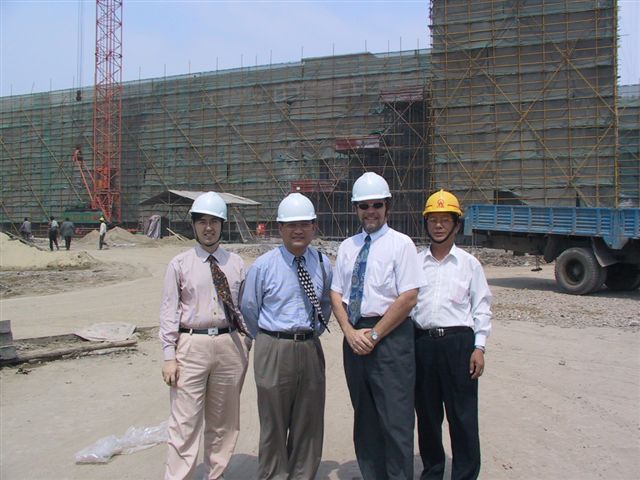 Nevertheless, I still immensely enjoyed those meals, and if the number of Qing Dao bottles sitting empty at the conclusion of each was any indication, I daresay my colleagues enjoyed themselves as well. In fact, like many citizens of the world, my Shanghai colleagues had a somewhat fatalistic attitude towards SARS, not to say careless or foolish, but one which tried to ignore the outbreak, at least while the important business of eating and drinking was underway.

One other observation of note (before I take us back to Pudong Airport and the flight from Shanghai): I spent Wednesday and Thursday morning at meetings with the Dean of a well-known college in Pudong. I was immediately struck by the fact that none of the 4000 students were in evidence, and in fact I was informed that the college had been closed until the 12th of May, obviously in order to prevent the spread of SARS. This was perhaps the clearest indication of the deeper effect which SARS is having in many parts of China. In fact, I was informed that all meetings which involved “class-room?sized groups had been put in abeyance until at least May 12th. Nevertheless, or perhaps as a result of this, we managed to get a great deal accomplished, and in fact I might even have gotten more accomplished on this trip to Shanghai because of the restriction on large-group meetings.

But, all good things must come to and end, so on Thursday afternoon, after a final temperature check at the reception ?still 35.5 — I was picked up for the long drive to Pudong International Airport. I say “picked up?because the Dean of the College I mentioned above had offered me one of his drivers, so I had happily accepted, not so much to save on the cost, but because I felt I could count on a “driver?to know precisely where to drop me off. Little did I know! This particular driver seemed rather nervous about the “route?he needed to take to get to the airport, frequently asking me in Chinese how he should get to Pudong (through the tunnel or over the bridge). I suggested the bridge, which he took, but then he proceeded to try various avenues in order to get to the highway. At one point, he almost drove past a sign indicating “Pudong International Airport? and when I pointed this out, he stopped right in the middle of traffic and backed up in order to get on the exit ramp. Amidst raised middle fingers, honking horns and screamed obscenities, we finally made our way to the highway entrance ramp. Still, this driver was uncertain about where to go, and even exited the highway twice in order to find another “Pudong International Airport?sign and get back on the same highway.

We finally did get to the airport, and I asked the driver to stop at the Thai Air sign, which he did, and so I quickly bid him farewell, hoping he would have at least some idea of how to get himself back to the College. Immediately, I could see I was back in “mask country? so I put a new one on, and walked up to the check-in. 30 minutes later, I was moving through Customs, infra-red temperatures checks, quarantine forms, etc. But this was all done very efficiently, and in fact I arrived at the Thai Air Lounge about 90 minutes before flight time. I found an internet hook-up (only one was working) and began to answer a long e-mail about a specific proposal I had received from a Shanghai colleague. Everything seemed fine up to that moment, and then I began to break into a rather strange cold sweat. I wondered if this was something I had eaten, or (more ominously) if I had “caught?something in Shanghai. I also wondered what this might mean once I arrived in Bangkok!!

In any case, the boarding call came and I arrived at my seat. The steward came around with some juice or champagne, masked of course ?all flight crew on Thai Air were masked throughout the flight — and reminded me that drinking alcohol might raise my temperature. So I decide to drink water, especially as I was still sweating and still wondering why. Soon we took off and in fact I quickly fell asleep for much of the 4 hour flight to Bankgok. But when I awoke just before starting our descent, I still felt rather awful, and now I really began to worry about what might happen when I arrived for the medical check at Don Muang International Airport. Of course, the heat was as intense as always, and upon leaving the plane I felt as though I had been stuck inside an oven. In fact, when we did get inside the airport terminal, we were met by a small army of nurses and doctors, and each of us had a “strip?pasted onto our foreheads to take our temperatures. I anxiously awaited the outcome, and was told I was “okay? my temperature was 36, slightly above the average in Shanghai, but certainly “normal?

So, my “ordeal?had ended well, and in fact I was now looking forward to the time I would spend here in Krong Thep, “the city of angels? However, as I left the airport with a university colleague who had offered to drop me off at my hotel, I noticed how few people were at Don Muang Airport. Normally, even at 9:30pm, the traffic would be awful, there would be throngs of people moving about, and the air would be stifling. But there was virtually no traffic, there were few people in the terminal ?and the air was still stifling. It seemed as though SARS had an effect in Asia that those in Toronto had already realized ?the perception is in fact much more fearsome than the reality.

4 thoughts on “Flight to Shanghai: A Journey in the Plague Year IV”