For the first time in recent years, the RMB went strong and broke the 6.80 threshold. What does it mean to people in China, the States, and other countries?

I am not an economist, and I am lack of basic ideas about how currency exchange impacts the world. Let me explain what I think from an individual who want to think about this issue.

I did some research on Google. Interestingly, the first two search results for RMB to USD brought me back to what I wrote in 2008: 1 USD = 6.9966 RMB. In that entry, I quoted a chart: 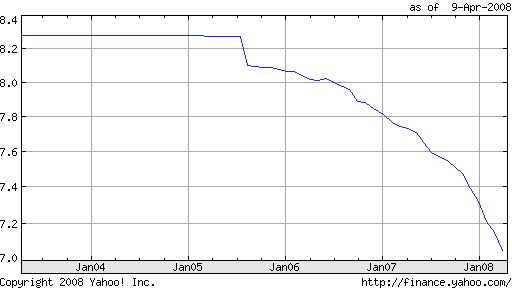 How much has changed in the last five years. The exchange rate floating is normal for most countries, but in China, that is not very common. The exchange rate seems to be fixed by a ratio. Although the government denied the fact that RMB is manipulated, it does not seem to be the case.

The appreciation of RMB obviously bring some benefits to people as a consumer. Goods in US are no longer that expensive.

In my first trip to US in 2000, I was not able to afford anything – including toothbrush in CSV. I still remember when I was shown a bill in the Chinese restaurant, I asked the question without really thinking: “Is it in RMB or USD?” because 10 USD for a meal didn’t seem right to me. I needed to consistently remind myself that the money should be multiplied by 8 for any price, until I get used to it many days later.

These days, when I travel in US, many things appear cheap – even after converting to RMB. There are two factors for it. The first is the exchange ratio. 1 to 8.25 is very different from 1 to 6.8. The second factor is, things back in Shanghai got more and more expensive. When we started to accept the fact that a working lunch can easily cost 25 – 35 RMB in Xujiahui area, a hamburger in the States does not seem that expensive.

Although I believe most people around me who don’t really think about it may be happy because of increasing purchasing power, I worry a lot as the exchange rate can cause huge problem to export oriented business (which is a big part in Chinese economy). When the manufactures like Foxconn was forced to increase the salary, and the price will be less competitive because of the exchange rate, what is the future for the manufacture, and what is the consequence when the plants were closed? That can change the Chinese society in a big way.

Thought about the Future

Anyway, without understanding the situation, I am feeling optimistic (this time, I completely agree I felt that way blindly), because I just believing in changes. With the change, many thing will change, and changes are opportunities. The only thing that does not change is change, including the exchange.