Half years after the Bund Tunnel opened to public, I had the chance to use it for the first time yesterday.

The Bund, and the 30+ buildings along the Bund are landmark of Shanghai. It is where the modern Shanghai got started 200 years ago. The buildings on the west side of the Bund are the most historical, and magnificent buildings of the city, and on the east side, is the mother river, Huangpu River, of the city.

The road of the Bund, however, is mass, and congested for decades. The East Zhongshan Road is one of the major roads in the area. Everyday, huge traffic go through this road. The massive traffic from the whole Hong Kou district, and the south of the Huangpu district are connected by this road.

For those who don’t really understand why a single road can be the key entrance of an entire district, please see the map below: 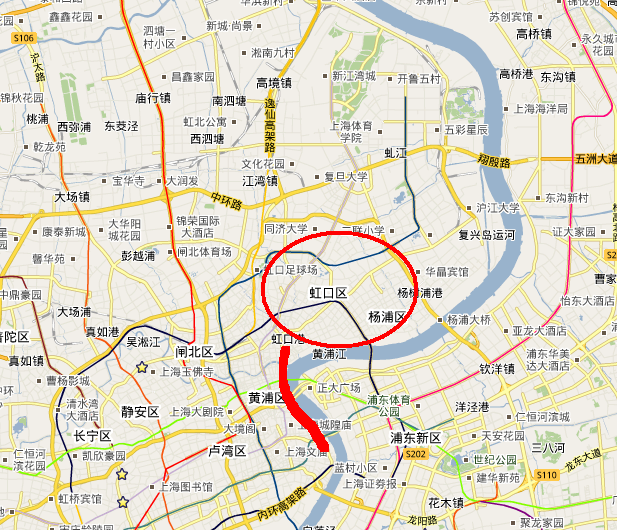 The circle is the Hongkou district. The Yangpu district is beside Hongkou. For centuries, there is no tunnel or bridge on the Huangpu river. If people in Hongkou want to visit downtown Shanghai, they have to move westward, and southward – all end up passing the Bund area. So the key reason for the transportation problem of that whole area is the shape of the river – just like a half circle around that two districts.

What is the Bund Tunnel

Many visitors to Shanghai may not notice the existence of this tunnel. The tunnel is (ugly) outlined as bold red line in the map above.

The tunnel starts at Siping 四平路 Road on the north, and goes all the way cross the Suzhou Creak, and under the Bund area. It forks two directions on the south – one connect the East Yan’an Elevated highway, and on the south become the East Zhongshan Road. 中山东一路

The Significance of the Tunnel

Before, the road before the historical buildings (the Bund) are among the widest roads in Shanghai to accommodate massive traffic. Visitors to the Bund will find them in the middle of the heaviest traffic, and the best historical architect. There were no easy ways to cross that road. There are two pedestrian tunnels, and a overhead bridge – too hard to cross. Look at this picture I took in 2004, and imagine how you can cross that wide road. 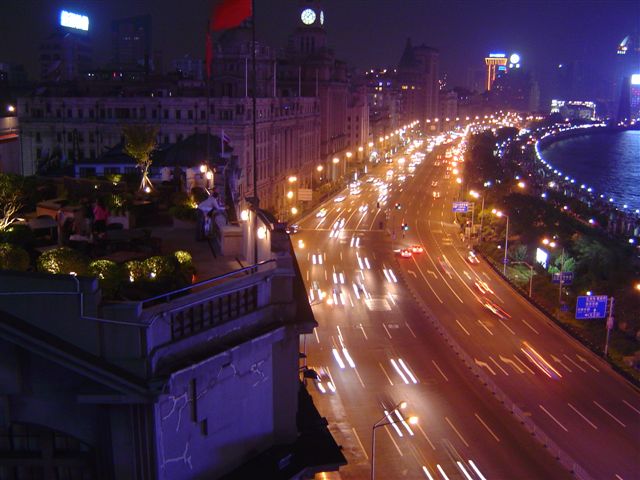 Now, when all the through traffic goes under the Bund, the road along the bund becomes very narrow – just two lane for each direction. There are pedestrian directly on the road – people who jay walk are also safe – considering how less the traffic is.

Now, the water front is much more accessible. The renovated waterfront is connected with the buildings in a new way. That is a much more pleasant experience than before.

The area was known for Three on the Bund – a premier location for entertainment, and dining. The momentum to turn the old buildings into modern places is followed by 18 on the Bund, and now, No. 6 on the Bund. The buildings started to turn their face, and become modern again, one after another.

6 thoughts on “The Bund Tunnel”