Look at this map I shot in a metro station – that is the current metro map. 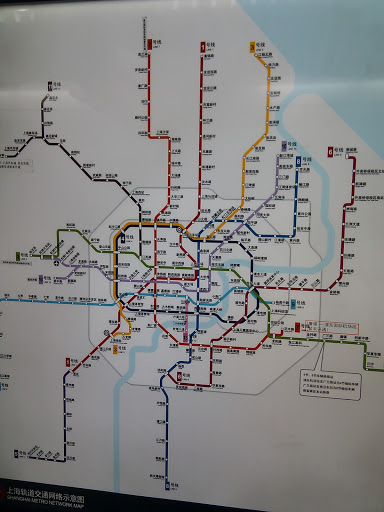 On this map, there are many small modifications – the staff used sticker to mark out some stations that are not open yet. Since the stations and even metro lines are going to open in the next few weeks, they didn’t bother to create a new chart. Those segments include the east extension of Metro Line #2 to Pudong Airport, and west extension to the new Hongqiao Airport Terminal 2.

When the metro system started to form a network, the feeling of a metro ride is very different from the time when there are just one line or two. You will encounter an interchange station for every two or three stations. People get off the train and get on the train much more frequently than before – you are not sure whether they get off the train because it is their destination or just transit to another metro line. The capacity of the metro system is also expanded – the bottlenecks are no longer bottlenecks, because of so many “load balance lines” there.

I am very excited to see the change, and enjoy navigating the city by going under it.