Before we are aware of, the city of Shanghai expanded beyond the speed of thinking.

Look at this satellite image. The T1 is small on the right, and T2 is much bigger on the left: According to news report, this terminal will be 4 times bigger than the current T1. I always complained about taxi, especially on Fridays, and they didn’t do too much about it. I guess this time, the taxi won’t be the bottle neck for the new terminal.

After the launch of the new terminal in one week, most of the domestic airlines in the current Hongqiao Airport will shift there, leaving the current T1 just serving Spring Airlines, and other few flights.

I remember there were discussion of abandon Hongqiao airport and shift all air traffic to Pudong airport long time ago, but the needs for flights are always higher than the capacity of Hongqiao and Pudong added up together. Then Hongqiao Airport was kept (some residents near the airport were too early to be happy about the news that the noisy airport will be closed). Now, when the Hongqiao Railway Station (the station connected to Beijing by high speed train) is located there, and Metro Line #2 and Line #10 extending there, the Hongqiao Airport Terminal 2 is the new center of transportation stage.

On Sunday, I tried to drive to that area from Beidi Road 北翟路. The huge viaduct has already been built for the Beidi Road, and S20 (formally A20). That will be the main road reaching to the terminal 2. It turned out the adventure is completely a failure, since the Beidi road was completely destroyed for the construction of the elevated highway. I chose to make U turn after get into it for 500 meters. 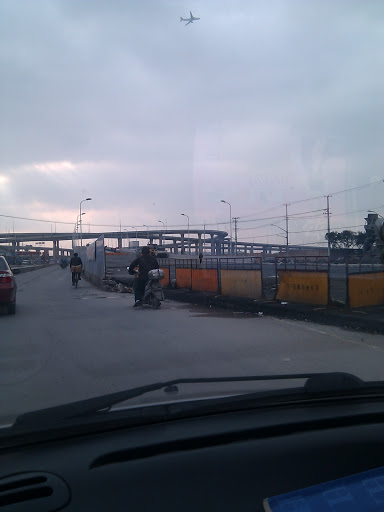 I will try to visit that area again in one week, and report what the new terminal looks like. In fact, it is not just a terminal – it is the framework of a super transportation hub that has never existed in China.

P.S. Chris of Shanghaieye.com posted photo of the terminal on his blog.