On Sunday, we were back from Tahoe with just 3 hours and a half on the road – comparing to the 9 hours on snowy Friday night, it is much better. When I finally find time to sit down, I can start to write a travelogue about my trip to Tahoe.

Although most people in the States should know where it is, it worth some time to tell other readers where the beautiful lake is.

It is 200 miles east of San Francisco, at the border of California and Nevada. 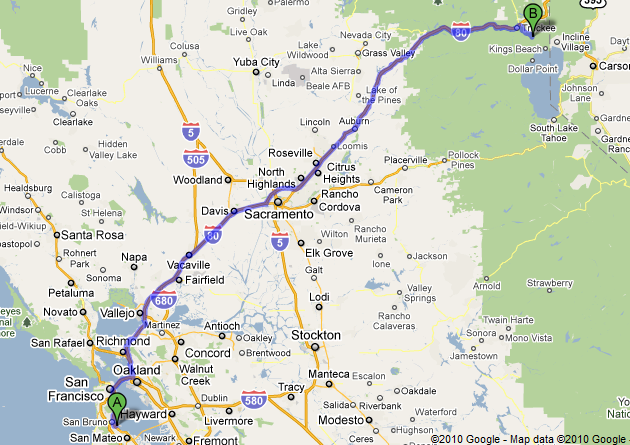 The transpiration is pretty straight forward – take the I-80 from San Francisco, passing the Bay Bridge, and drive all the way to the east for 180 miles, and take CA-237. Then you are there.

You cannot Ski without Snow

On the way to Tahoe, it snowed heavily, and it was the most heavy snow I experienced in recent years. Look at the photos below and imagine the snow! It took us 9 hours to get there.

The Shining Sky with Snow Look at the nice ski field. It is obviously bigger than the indoor ski in Shanghai. We took the lift up to the top of the mountain. I started with a mild slope, and the speed went up so quick, that I had no choice but to run into the side snow to stop. Look at the first fall: The both ski completely get into the snow, and it took me quiet some time to get out. For entry-level skier like me, I used all the effort to ski as slow as possible, thus using the ski as brake from the top of the mountain to the bottom. My legs just got so tired that it started to hurt, and I have to stop from time to time in the middle of the slope. When other more skillful guys camp and eat energy stick on the top of the mountain, I had a nice pizza near the Ritz-Carlton. When we skied in the afternoon, it snowed heavily. I took the time to take a picture of the snow covered mountain and the snow before I rush down the slope. Taken from the middle of the mountain

At the time when Village Express stops operation, we have been on the slop for 5 hours. Photo taken by a nice girl near us