Here is the Shanghai Expo 2010 China Pavilion, a.k.a Oriental Crown. 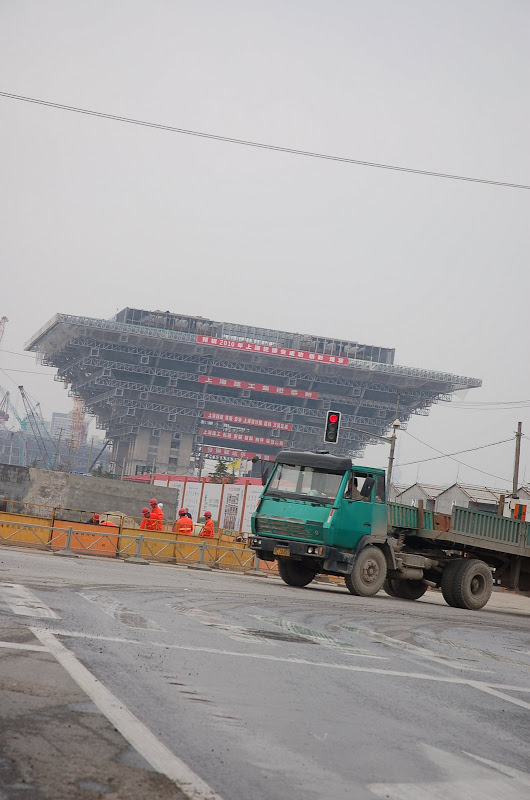 It is located the crossing road of horizontal and vertical axes. The photo above was taken at the Shangnan Road 上南路 and Pudong South Road 浦东南路. This cross road is also the terminal station of the current Metro Line #8. BTW, Shangnan Road will be the main axes for the Expo site.

The China Pavilion is reported to cost 1.5 billion RMB. It is also one of the first visible architect in the Shanghai Expo Site…

The color of China Pavilion is red. They have a special name for this exact red: Gugong Red, ( 故宫红, or Forbidden City Red). If you see the rendered photo of the completed building, you will find out it is exactly the same red as the walls of the Forbidden City.

The shape of the China Pavilion seems to be created by wood. Imagine you have many toy bricks (long and short), you can create the same architect without any fixing equipment. The whole China Pavilion looks like everything is just put on a pile.

The 63 meter tall building looks much taller than it actually is. I guess it is because of its size – it is not higher than most of the buildings in Shanghai, but it is still may be one of the biggest buildings in this city.

The Wisdom of Chinese Architect

The wisdom of Chinese accident wooden architect is, they don’t use nail or fastening things like that. They just put wood part on top of each other. The core is, the wood has too be carefully crafted, so they fit each other perfectly. It is as simple as that.

The whole China Pavilion, as a whole, is just one of the basic element of Chinese architect. It is called Dougong 斗拱. Look at these pictures to understand what it is. Dougong is just the complicated supporting structure on top of a pole in a big building.

This structure started from 2000 years ago (700 BC) till today, and the architectural blood line passed on to 2010. I love this design a lot.

The next time you check out a Chinese wooden building, look up to the top of the big poles, and you will see a Dougong, or in the future, I guess people may say: “There is a Expo China Pavilion on top of each pole of Chinese accident architect”.