Edward told me he is still confused when he read Chinese Bus Stop Plate in Shanhgai after living in the city for 3 years. He came from UK and travelled a lot in China. The most confusing part is about the difference between “Upward” and “Downward” route. Let me try to help explain it. Here is the informaiton on the plate. People who do not understand Chinese may also recognize the information. 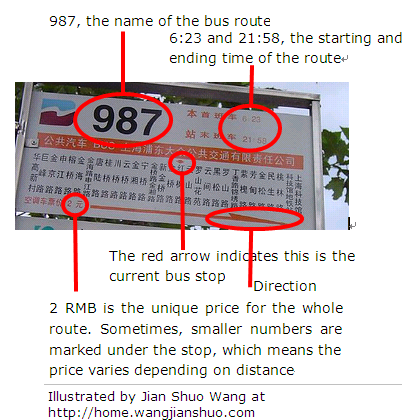 The one in the middle is a route with Chinese name. It is similar.

Many bus stops are wired. If you leave a bus at one stop, and after you get back and go to the opposite site of the road, you cannot find the bus stop to go back. It happens all the time. It is because there are just too many single-way roads in Shanghai that makes it impossible to get back on the same road. So the route of buses going to one direction may differ slightly from the route going to the opposite direction. I also get confused when they use “upward” or “downward”, because I don’t know what is the definition of up and down. Upward may mean “east to west”, or” “west to east”, “south to north” or “north to south”. Anyone can explain it?

Ask the driver or the bus conduct to get more information about where the bus actually stops, since two bus stop with the same name (typically the name of a road) may be very far (say, more than 10 km away) from each other.

22 thoughts on “How to Read Shanghai Bus Stop Plate”