Microsoft launched series of “Realize Your Potential” print advertisements to communicate about its mission “Enable people and business to realize their full potential”. Among them, the ad named HAT got Eric‘s attention when we talked about Subways in New York. “Which subway station was the picture taken?” He asked. 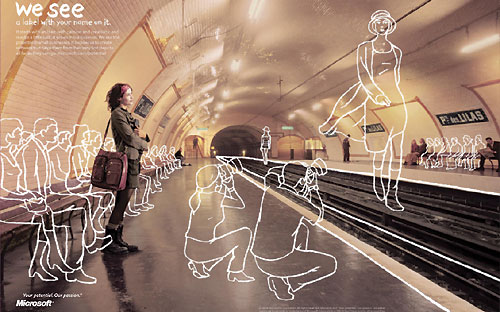 I didn’t know the answer before a picture on the Shanghai Weekly came into my sight. It was a report on the city of London with some pictures and a subtitle – “When a man is tired of London, he is tired of life” – Samuel Johnson. The picture shows another underground station in London. It seems very similar with the one shown on the Ad.

From the Ad, I can only tell ULAS from the wall. I guess it may be a station near Universities of London Air Squadron (ULAS) in London? Is it the underground station in London named “Brompton Road Underground Station”? If anyone who can recognize this picture, it is appreciated if you can confirm where it is.

This is a vivid example of curiosity for life – the rational motivation for many things we did. I enjoyed the time to search for the answer for the simple question “Where is this station”, and enjoyed the excitement when I happen to see the picture on my dinner table. The research time and the excitement moment are quite rewarding to me. It brings something new to life, so the life is not boring at all. Sometime the reason we travel, ask, research, and study is simply out of curiosity. Curiosity is the genuine human being’s instinct that must be satisfied. The city life, sometime, has killed the passion so people feel boring, while there are millions of poorer people who are happier.

To raise the question is more important than the research. Eric gave a good question (and interesting one) so I want to continue to research like a Sherlock Holmes. The other projects I participate sometimes are also started as good questions. For example, there is a question on the website of Confluence Project web page: What does the point 30N 119E look like? The only thing I knew was, it is a point in the Zhejiang Province which is 300+ km away from Shanghai. To find out the answer (or to satisfy my curiosity), I spent two days traveling there and one night at the miserable 10 RMB per night hotel. Upon my return, I recorded Incomplete Visit to 30N 119E. There is nothing to do with money, nothing to do with project schedule, or customer, or work item, or coding, or anything that is common in daily life.

It is a simple philosophy many books kept telling. Some uses extreme samples. Xavier de Maistre wrote the Journey Around my Bedroom (mentioned in Art of Travel) revealing how much he could discover within his own bedroom – he got more than people travel to the world. The same philosophy was repeated in Helen Keller’s Three Days to See. It is purely about the way we treat life. Both set us thinking, wondering what we do under similar circumstances.

Thanks DongXi and Carsten to confirm the subway on the poster is Paris Subway. To be more accurate, the Porte de Lilas Station. I recognized te Lilas to be ULAS. The subway of the subway in these two cities are so similar.

Look at this picture castern found for me. It is exactly the station the poster was taken – it is even from the same angle to take it. 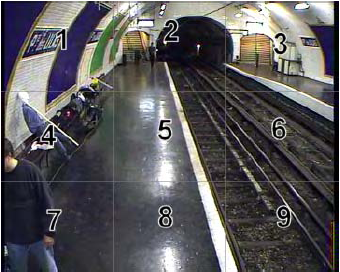 Image in courtesy of CREDS report

Thanks! I know I will get an answer within two days.

16 thoughts on “Is This London Undergrand?”