Too quick to say bye bye to America. I am now still sitting at a bigger table, and a nicer room at Best Western El Rancho Inn & Suite near the San Francisco Airport (so near that I see flight landing just out of window!).

My flight UA857 from San Francisco to Shanghai was cancelled today. It is scheduled to leave tomorrow morning at 8:30 AM, and arrive in Shanghai at 12:30 PM, Saturday.

I would Prefer Bad Service than Delay

… and I would prefer delay than cancellation.

After sitting on my seat 61H on the flight for three hours, slept, waked up, fell asleep, waked up for many times, and replied many emails on mobile phone, I was told that flight was finally cancelled due to the plane engine gas leaking that could not be fixed within several hours.

Then we moved to counter 2 and waited their standing for two and half hours to get 15 USD dinner voucher, and free night at Best Western Hotel. Hmmm… It seems there is no additional financial cost to my trip so far, but my whole day of July 9, 2009 is spent at the SFO airport.

I was so bored that I drew a picture of the Spanish style hotel. 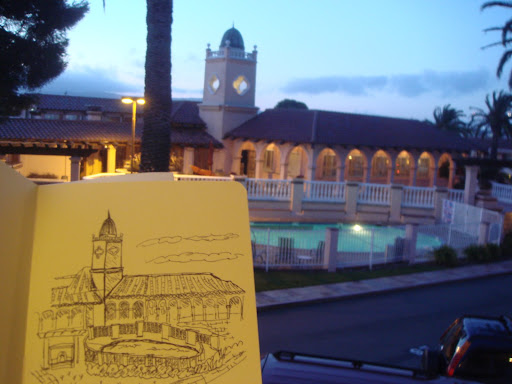 Some times, people were forced to do something that they won’t do in normal time, like drawing. If there were no such a flight delay, who knows what I will use the time for? At least not in a very interesting way. Sometimes the contrain gives people more focus (nothing to do!), and more focus makes life better.

7 thoughts on “My United Airlines was Cancelled”