Meanwhile, some serious effort has been put into some of the rivers (just very few that I can name). To my greatest surprise, I started to see people swimming in the natural river today.

It is at the Zhangjiabang River, just besides the Shanghai Science and Technology Museum. Actually three persons were swimming there. Based on my observation, the quality of the water has been good enough for swim – I even think it is a good idea to swim just in the river.

Congratulations! A good sign for the natural protection and recover started to show the result. Among all the worse and worse situation in rivers and lands, I at least can name one example river in Shanghai that is suitable for swimming now.

Ironically, people swim in the “good for swimming” river, despite of “No Swimming” sign everywhere. Maybe this is the few places in Shanghai that actually need the sign – people won’t swim in other rivers with, or without the sign anyway.

Here is the photo I took today to compliment with this article: 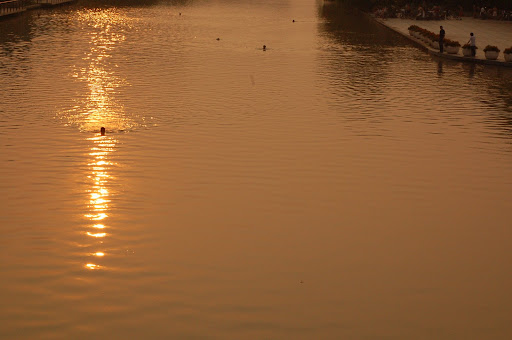 Photograph by Jian Shuo Wang. Taken at Zhangjiabang River near the Shanghai Science and Technology Museum

14 thoughts on “Swim in River in Shanghai”