I believe many people who are discussing or even devote their life into pro-Tibet, or anti-Tibet course haven’t been to Tibet themselves. Me included.

Although I have not been to the Xizang (Tibet) Autonomous Region – the provincial unit, but more widely speaking, it is a much bigger area where Tibetan live, including west part of Sichuan, and some parts in Gansu Province and Yunan Province.

I was lucky enough to planned a visit the Tibetan area in Sichuan Province, at the border of Xizang. I have posted many articles about the trip in my Daocheng category:

Last time, I mainly focused on my trip (in the pure sense of travel) and the break-taking beauty of the land. Due to what is happening in Tibet these days, I am trying to search in my photo archive to find some photo related to the local culture and its people.

My Cultural Trip to Tibet Area

People in Tibet do believe in different thing than Han Chinese, and especially different from the modernized world. Look at the flag with religious articles on it (I don’t know the right word to describe it). Look at how small the characters are and how much time it take to create such a flag – it is everyone in the vast land where almost no people live there. They believe in spiritual things. They believe in something that we don’t believe at all. 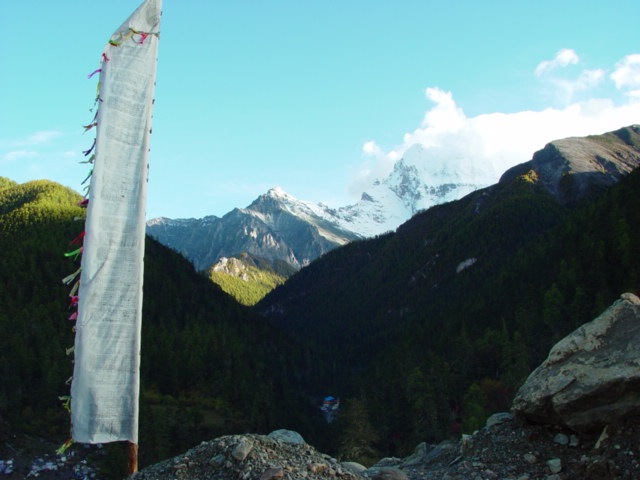 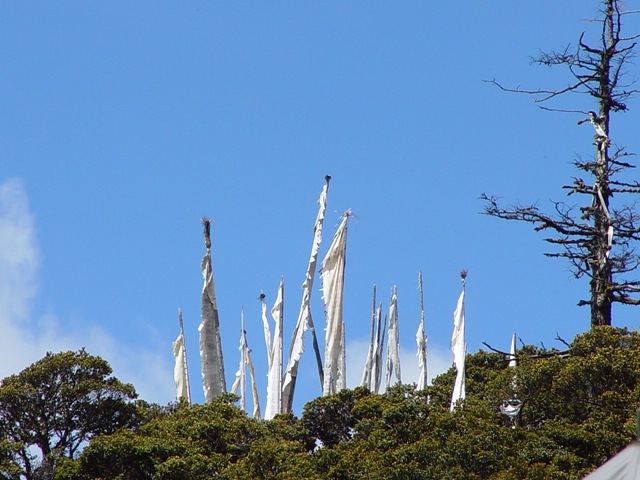 My question is, from the spiritual signs everywhere, is it to early to conclude that they don’t want economic progress?  I don’t think people who are not Tibetan cannot answer it, and even in the Tibetan group, there should be different point of view, just like it is silly to ask what "Chinese is thinking". I don’t know about the answer either. It really depends on when, and where you ask the question to whom… 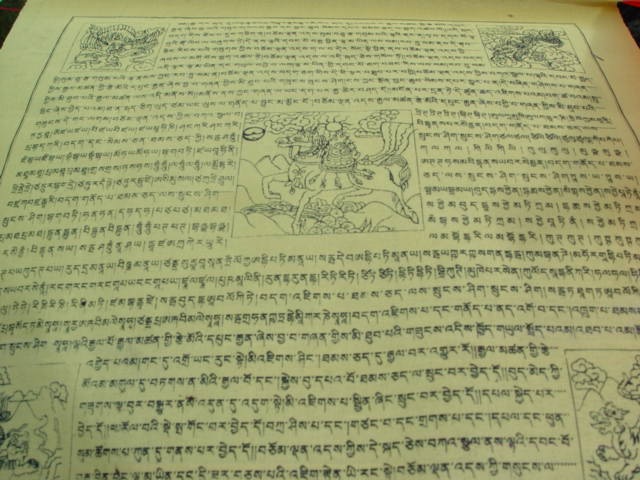 This lady gave me deep impression during my visit to Riwa – a place on the way from Daocheng to Yading.  He did nothing, and he used the Buddhist Necklace (this is the closest word I can find to describe what’s on her hand) and recite Buddhist Bibles all the time. She is very nice and kind. 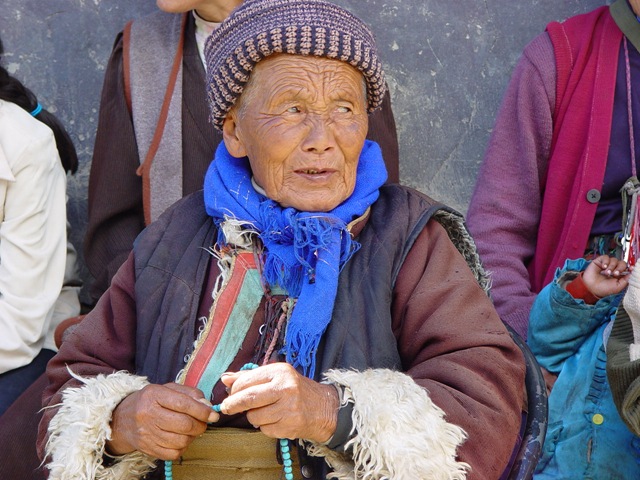 Something to note in the picture below: the Hat! It is the style of hat of the People’s Liberation Army. When I talked to many of the 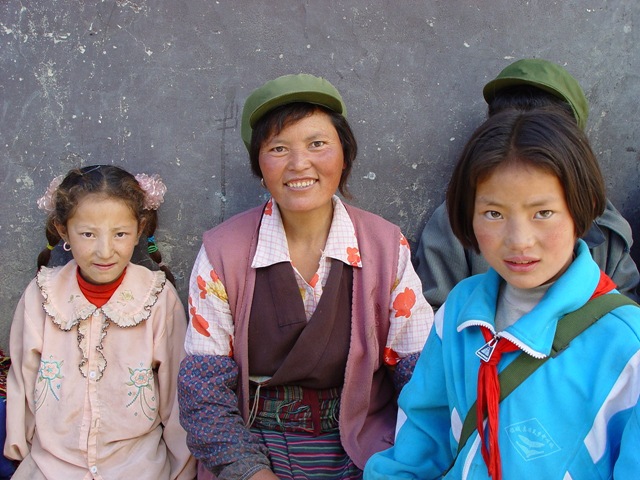 This is the whole group of people. When visitors and tourists busy taking pictures, and having dinners, they just gather there and chat. 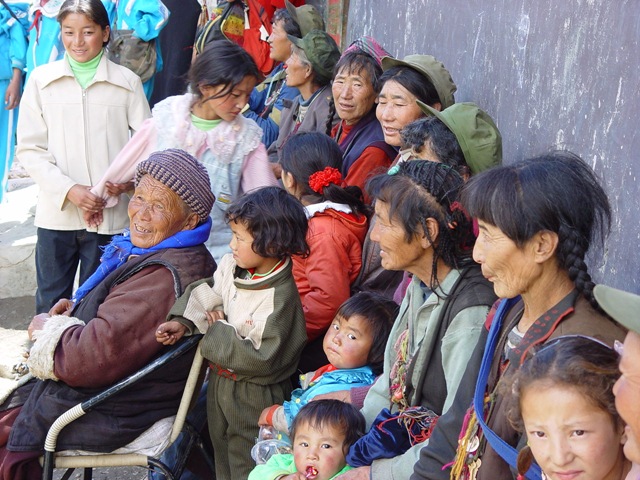 With the economic development with the tourist, they are very happen, and are very kind to tourists. They are all very nice people. 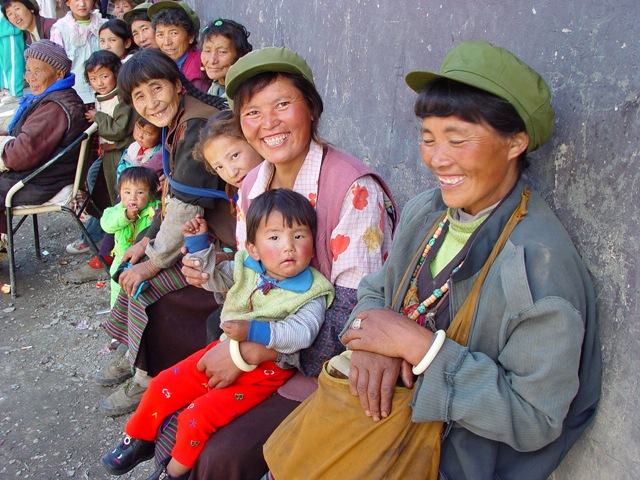 I love to interact with people. In the last visit, I talked with a Monk (with respect) in the temple. Look at how splendid his chair is. He was very kind and gave me the permission to take a phone of him. 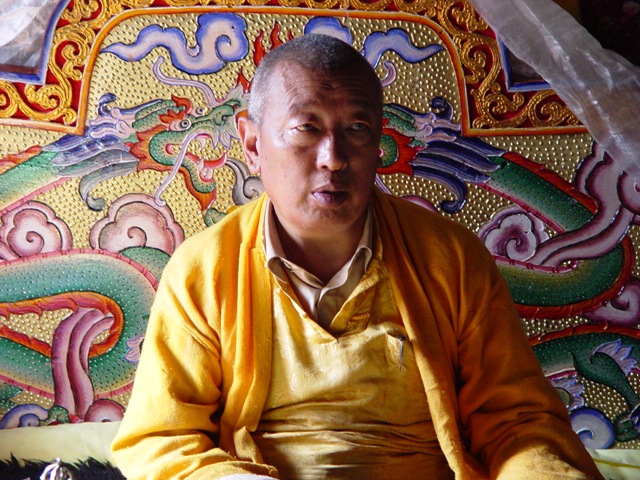 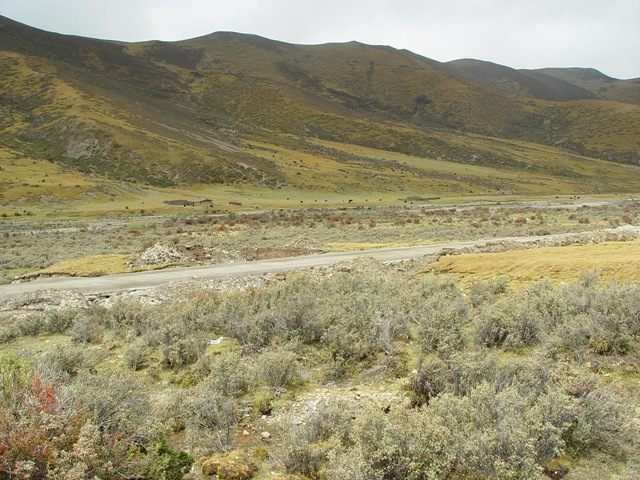 The land is lack of people – in the scene, you can identify some residential places, but people are really so small compared to the big nature.

Daocheng is already a relatively developed Tibet area even back to 2002 due to the boom of tourism. I heard they are even planning to build an airport (the highest in the world).  I don’t know any news about the airport after my visit, but during my visit 6 years ago, I do see the electronic lines. They are equipped with electricity power – which is really a miracle when you see the vast majority of the land that barely have any people living there. 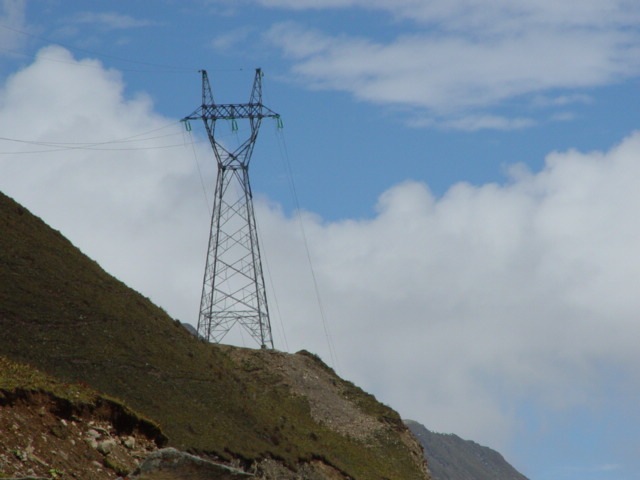 From the architecture point of view, Tibet is so unique that you don’t miss it. However, there is some sign of combined customs in this particular house – the Duilian, or couplet – the pink paper on the side of the door. This is, based on my knowledge, pretty new to the Tibetan culture. Unlike many places in China that culture mix is hard to find since the mix happens almost 1000 years ago (when different ethnics come to the same place due to war or conquer), Tibet still keeps its uniqueness, so fresh, and so solid. 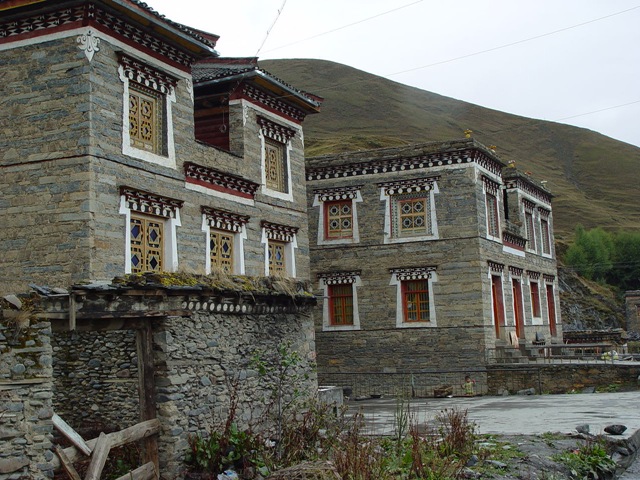 This is another scene of the mixture of architecture in Daocheng. Look at that building in the garden – it is a typical Han house. 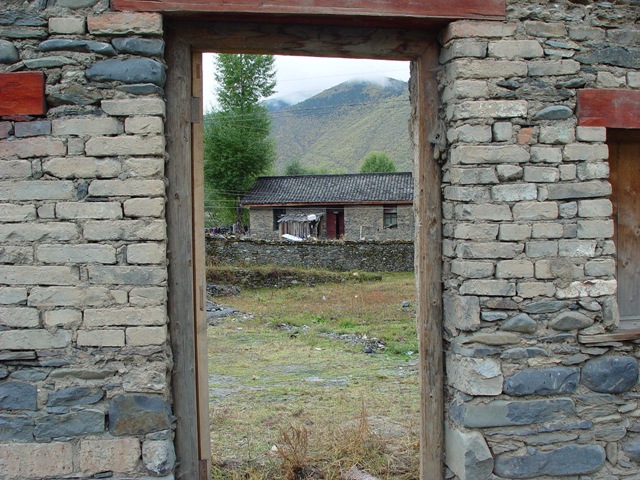 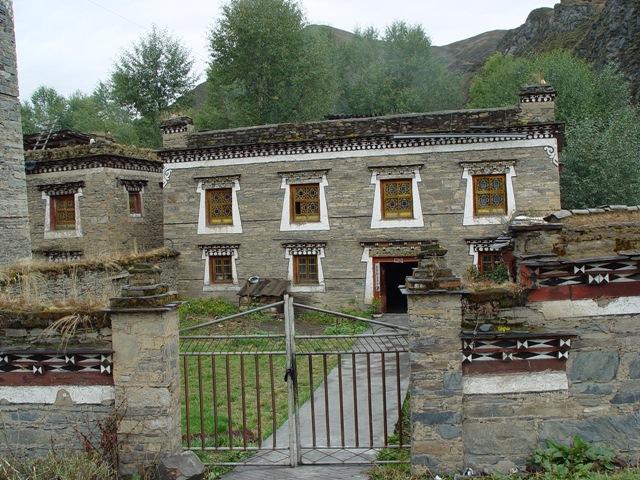 This is a normal morning in the area. Local Tibetan wear its traditional cloths and walked on the street – should I call it traditional? It should be the current daily dress for them, just like suits and T-shirt to people in most cities in the world. 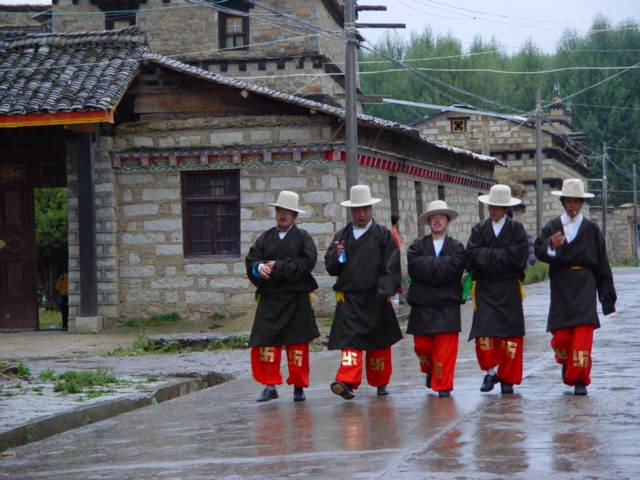 To me, I even don’t use the world different to describe my first impression of Tibet. It is not just different, it is unique! I cannot find the same feeling in any other places in the world yet – not in any city in China, nor countries in Southeast Asia, not to mention America, or Australia. I guess the comparable uniqueness feeling should exist in Middle East, or the Islamic area. 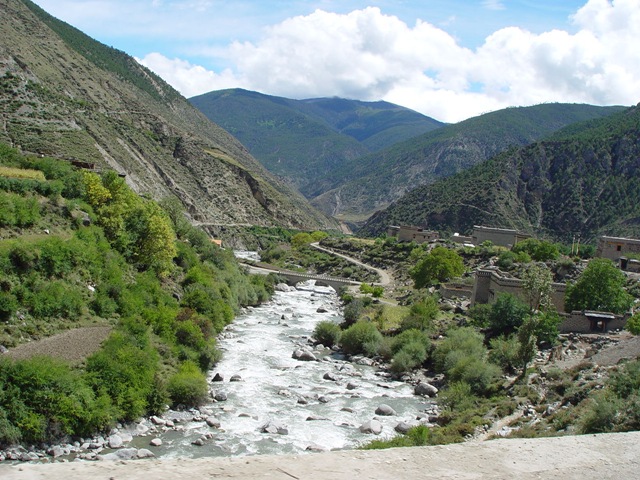 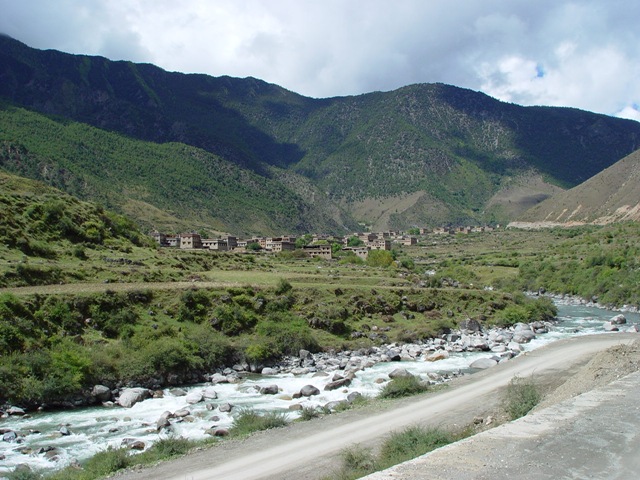 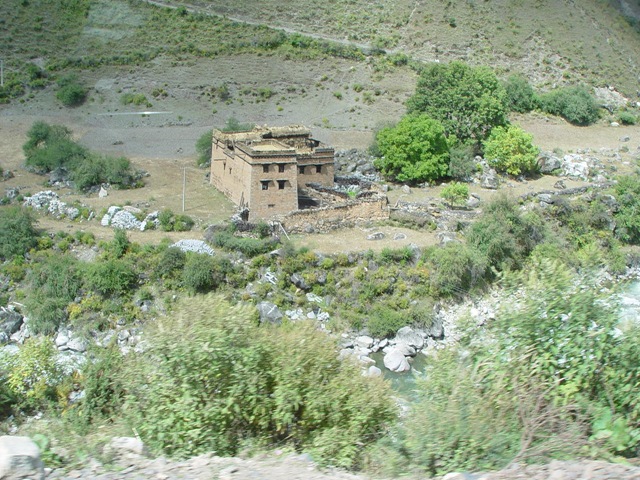 Tibetan are the miracle in this hash environment. Because the Tibetan Plateau is so high in altitude, most people coming from other part of the world may feel serious Altitude Sickness. We were seriously worried when our bus runs in the following condition for hours, with the risk of break down in the middle of the snow. 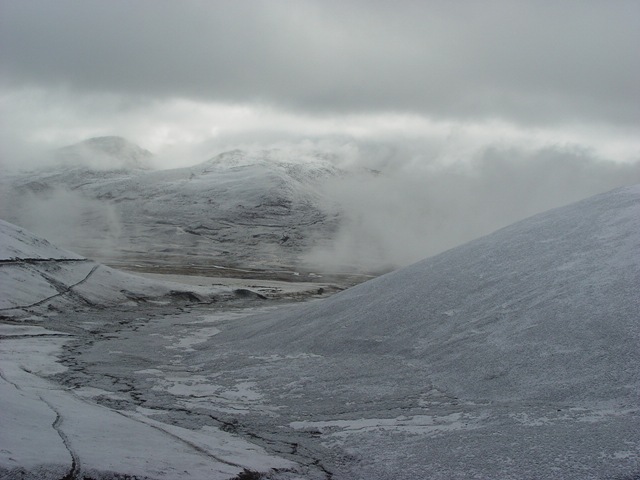 Religious signs are everywhere in the area. Look at the white stones found almost everywhere – not because of creation of nature, its because of tremendous effort by the Tibetan. They spent their whole lives to do religious things that I do not understand yet. 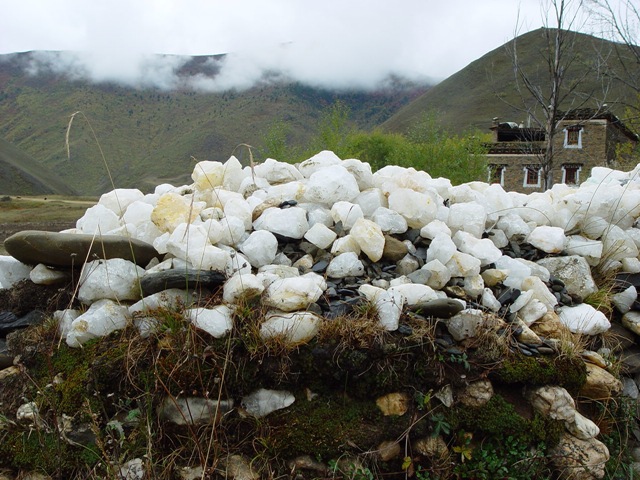 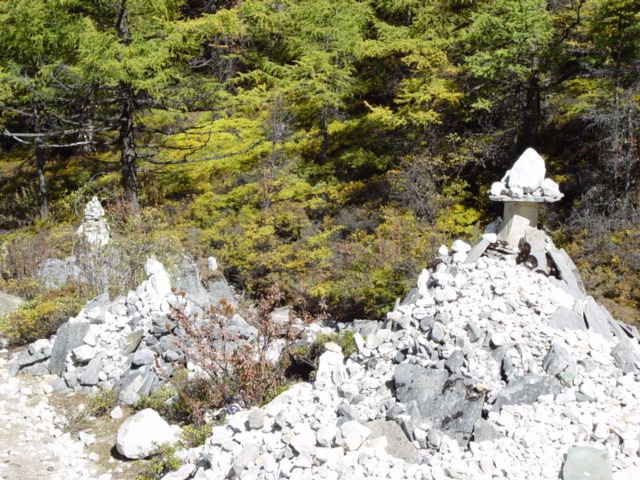 In many places, almost everywhere someone has ever been to before, there are some signs that I cannot tell the meaning. I am not to surprised with the stone in the wooden frame – pay attending to the bigger stone, and the smaller round one at the corner – stones were laid everywhere, in a way that only human can do. What does it mean? I said, it is everywhere. 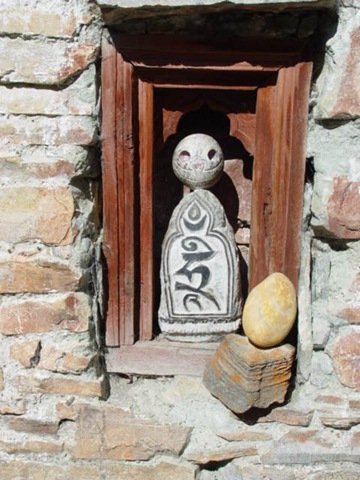 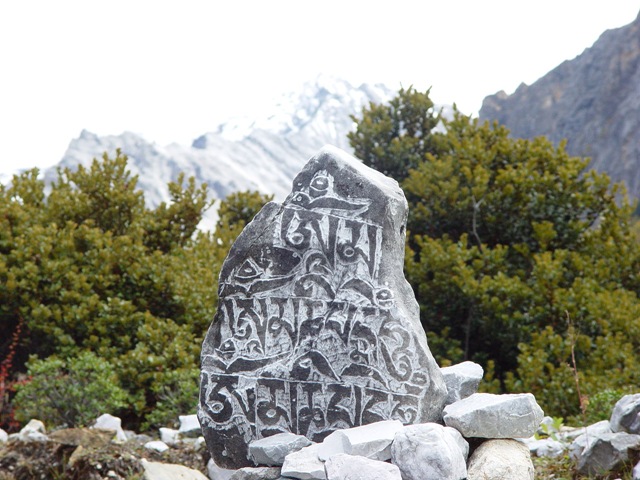 Along with the Tibet villages are some of the newly built buildings. It seems that the style is different, and similar to those found in other area of China. This Tibetan area is already the mixture of Han Chinese, and Tibetan. I have never been to the core Tibetan area, near Lhasa, or west of it. I GUESS, the mixture does not happen yet. 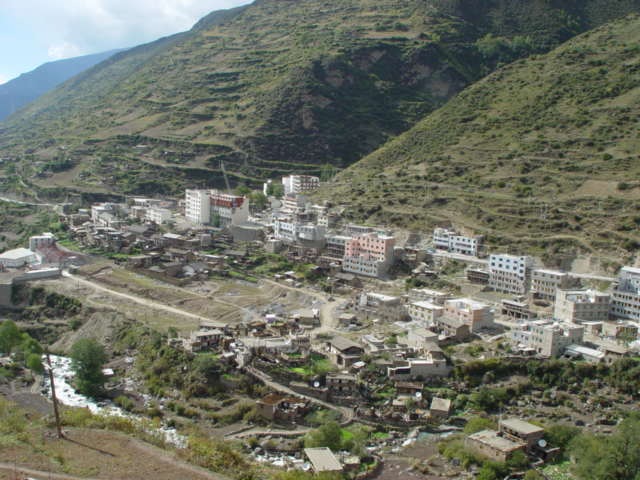 14 thoughts on “My Experience of Culture and Religion in Tibet”