There is a half-page article about this blog on China Daily. Carsten was the first one to notify me this morning, and Ida, the journalist is the second. :-) Thans Ida for the wonderfuo article.

The original article is here.

This is a copy of the artilce. Full credit goes to Ida Relsted, and China Daily. 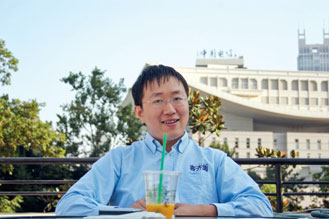 I started my blog to help foreigners survive in the city, because Shanghai is not so easily accessible for people who don’t know it well,” explains 28 year old blogger Wang Jianshuo.

“In 2000 I had a website, both in Chinese and English, and here I wrote an article about Pudong International Airport. When I later searched the Internet for the topic of Pudong International Airport, my article came up as hit number one, which was odd for such an important place. Why had nobody else written about it? When I heard the term “blogger” in 2002, I decided to start a blog to fill the gap, because there seemed to be a lack of information about the city. I truly love Shanghai. Now I have a lot of readers, it is not easy to give up,” Wang says laughing.

His blog does have quite some readership, registering one million hits each month and featuring lively debate between commentators from all over the world. There were an estimated 17.5 million bloggers in China by the end of August 2006, almost 30 times the 2002 figure. Among those, some stand out, like Wang’s blog which not only has many readers, but also offers information on life in Shanghai. The blog has been mentioned in MSNBC, BBC, BusinessWeek, and voted one of the top ten blogs in China in 2003.

The title of the blog is “Events (in Shanghai) that affect my life (and the life of others)”. The blog is a time consuming task as Wang updates it almost daily. “It’s a part of my life, like e-mails and sleep. I also think of it like writing a very big book about my world.”

Commenting on his style, Wang points to the fact that some commentators on the blog have criticized him for only focusing on the positive aspects of life. “My basic philosophy is only to write what I have personally experienced, and to pay attention to details. What distinguishes blogs from traditional media is exactly the way a blog can pay attention to detail. I also always write what I currently believe is true, but my observations may change over time.”

In his job as CEO of Kijiji in China, Wang Jianshuo has had the opportunity to travel and experience different cultures. He is impressed with how different people think, and his ambition is for the blog to be a virtual place for people to be able to debate. On the blog, East meets West, and vice versa.

“As a matter of principle, I don’t delete comments on the blog, because it is a place for sharing views. The beauty of the blog is that when people think so differently from me, it makes me think. It made me write an entry on the topic that common sense is not always common,” says Wang giving the example: Maybe saving money makes sense for the older generation, whereas it makes more sense for the younger generation to have experiences.

“When we are arguing, I ask myself: are we using the same language?” he says about communication gaps.

To the question of how the blog has Changed his life, Wang answers that it has had an impact on his career. When he started blogging in 2002, he worked for Microsoft and was conscious that he was respected because he was a representative of an internationally known company. But he did not want to remain in the shadow of the company, so with the ambition of achieving something for himself, he set out to write the blog. What he wanted to accumulate was writings on small things like advice on transportation – two of the most popular topics are Shanghai taxis and Pudong International Airport – and personal thoughts.

“I also wanted to help, because it seems meaningful. For people who know the blog and arrive here, maybe Shanghai seems not so unfamiliar, and I can give them a feeling of knowing somebody here, before they have arrived,” Wang says.

But also in another, more indirect way, blogging has affected Wang’s life, because, as a result of writing about the minutiae of Shanghai life he has become more sensitive to the things around him. It causes him to think about topics he might never otherwise have considered.

“In order to write a blog you have to have a reason to write. For most bloggers, they don’t have many readers, and I know many frustrated bloggers without visitors on their blogs. Some will even write 40 entries a day trying to attract readers. But you shouldn’t start a blog just to get the attention of readers. You are the most important reader of your own blog, which also means you get to choose the topics of interest.”

One of the humorous downsides of writing the blog is people misunderstanding the concept and e-mailing complaints about lack of specific information or a slow response time from what they expect is an official office. Since this has happened several times, Wang decided to post a small picture of himself on each entry, with the intent of attracting attention to the fact that is merely a free, one-man service.

A much more serious side to the blog came about in 2003, when China experienced the outbreak of SARS. Before this, Wang’s blog did not have that many visitors, but during the outbreak, Jian discovered that many people wanted to hear the point of view of a normal person living in Shanghai. “People in China were very nervous, and we got a lot of attention from media from outside China at that time. I did not start to blog in order to write about politics, on the contrary. Everything was very sensitive, so the only thing I could say was that I could not guarantee I was giving the whole picture, I was only able to tell people a fraction of the story, which was all I could see. So I wrote about how my friends reacted and how restaurants cleaned all the time.”

What really seems to stir Wang’s passion is revealed when he writes details of his life in Shanghai, because in the end, it all comes down to little things: “To report the fact does not always mean to report the truth,” he says.

6 thoughts on “Featured on China Daily”