You may be interested in these icons, instead of those I listed before:

Look at these cute icons Dengjia designed for categories on Kijiji. I love it so much. So share with here.

Besides the cute icons, there are more these days in my life.

I feel luck to live in Shanghai. The recent SIFF brought about 700 films from many countries to Shanghai. It is a hard job to select the right movies from the long list. Most of the movies are shown only once or twice, and distributed in 19 cinemas around the city. 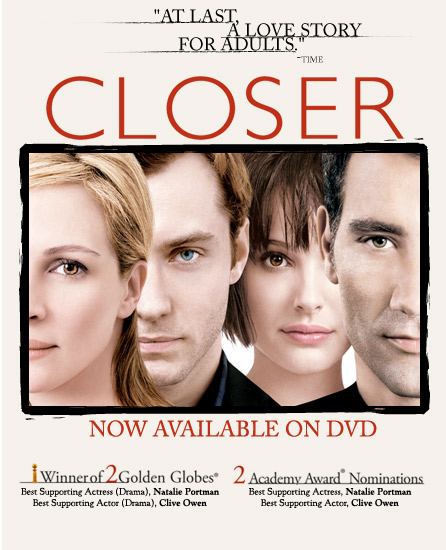 Image in courtesy of Sony Pictures

Wendy and I went to see the Julia Roberts’ Closer this Tuesday. Interesting move, although it is a little bit old – a 2004 movie. Nice movie. People told me this [R] grade movie was abridged for the SIFF already.

I feel a little bit strange for so many people stay in the same cinema. Why? Thanks to the current film restriction system, I cannot imagine a [R] grade movie to be show officially in China.

Two official movies were impacted by the censorship this month. I planned to see the Da Vince Code. I love the book every much, and eager to see the movie. The original show time for the movie is pretty long, but all shows in all cinema was shutdown suddenly on June 9. No explanation was given. This created some chaos. I saw Jifeng Book Store posted apology’s letter in their store, stating “the original buy book, and get ticket for Da Vince Code program has to be stopped, since the show of the movie was stopped. As our customer, you have the right to…” Another movie “Mission Impossible III” was still not clear whether those guys think it is right for the intelligence of the People or not.

Another friend came to see me and said good bye to me. He is leaving Shanghai for Beijing. He started a start-up, and decided Beijing is the right city to get started. (Three “start” in one sentence. :-D)

He is my third friend who moved to Beijing to start or run a company in the last two months. Obviously, Beijing is more attractive for Internet start-ups. I partly agree with this idea. So good luck to them, and good luck to those who still stay in Shanghai.

Rain is Back to Shanghai

It rained. It was pouring this afternoon till night in Shanghai. Did I suggest visitors to bring umbrella? It is not necessary now. I don’t think to have an umbrella or not made any different tonight in the pouring rain.

5 thoughts on “Funny Icons, and More”