I never travel before the Chinese New Year on International (Taiwan/Hong Kong/Macau) flight.

Every Spring Festival, transportation within China is a big problem, but I never imagine that international (T/H/M) flights are the same.

Besides me are two gentleman from Indonisia. They are going back home at a small village in Taijin. The flight was fully packed with people. Many of them bring children with them.

Then I realized how important Hong Kong plays a role as the connection between China and the world. Many passengers fly to Hong Kong first, and then transit to Beijing, Guangzhou or Shanghai. Hong Kong obviously have more connection to other Asia countries than any mainland airport does.

There is still no direct flight from Taiwan and any mainland city till now. If people want to go to Shanghai from Taipei, he/she needs to wake up very early, take flight to Hong Kong, transit there to Shanghai. It takes about 5 hours or more. It is the same for peopel to go to Taipei (if he/she luckily got the permit after a very lengthy procedure).

It is very inconvinient, especially at the Spring Festival. Some data show there are more than one million people from Taiwan are working or living in Shanghai (the official number is much smaller). It is almost impossible for people to get back to Taiwan for Spring Festival via Hong Kong.

This year, as the last few years, direct flights are provided between major cities and Taipei. As I know, there are Beijing – Taipei, Shanghai – Taipei, and Xiamen – Taipei flights. The ticket is around 4000 RMB.

At Pudong Airport, I saw many signs for the flight. This is one example: 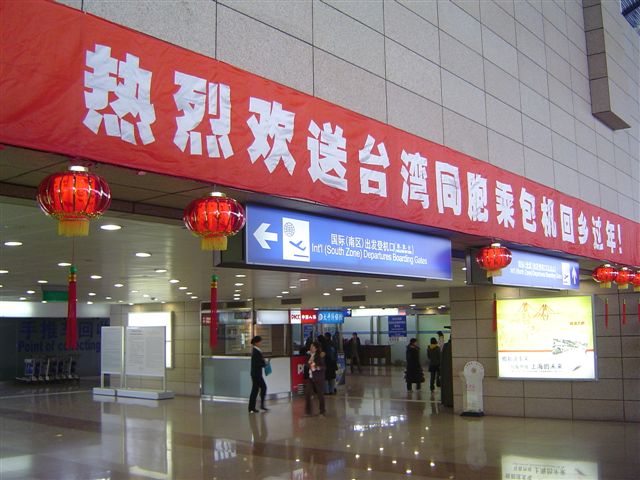 They have special lanes at security check for passengers at the direct flight, and there were intensive media coverage.

9 thoughts on “Overseas Chinese Get Back to Home”