In the morning, after glanced my email in five minutes, I put the camera into my pocket and went out with Wendy. (If you sent me emails these days, my response will be delayed since the Internet access condition is not good here.)

New York has many similarity with Shanghai. The living condition of many people, if not the majority, seems not easy. Rich people can only get an apartment (not house) in Manhattan and the poor can only get a place to settle down in Queens or New Jersey and spend the one hour more two on the train. I agree it is all about choice. There must be reasons for people stay and choose small rooms instead of large house in the west.

The skin of New York is covered by colorful drawing. It is everywhere, on the walls, in the subways stations and inside the train carts. Look at this picture along the Metro Line 7. 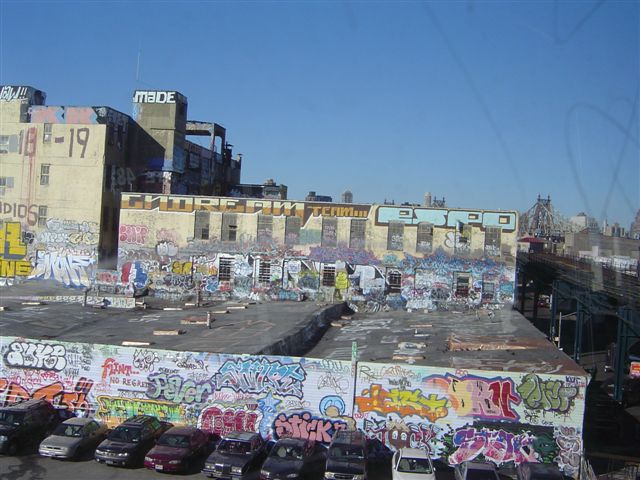 It reminds of the advertisement on the wall in every village in China. The suburb of New York are similar with the villages in China.

I don’t like to look at the eyes of the passengers in the subway. People look tired or expressionless, if I don’t use the word of “hopeless”to describe what I saw. What people can expect in this fast-paced crowded and materialized city?

The public transportation system in New York is efficient. Please note that I used efficient instead of nice. It is a system that simply works. You cannot expect more from it – no art, no cleanness, no desire to stay there longer. I shouldn’t be too picky on a metro system that kept running from 1904 and a main stream public transportation system for people coming from every corner of the world. If the Metro in Shanghai symbolizes modernized city life in China, the subway in New York symbolizes the industrial development of the last century. It basically uses the same train system as those running on the ground. The noise and the turbulence are exactly the same as the trains for long distance transportation. To my surprise, I didn’t see a modern city from the subway of New York; instead, I saw history. 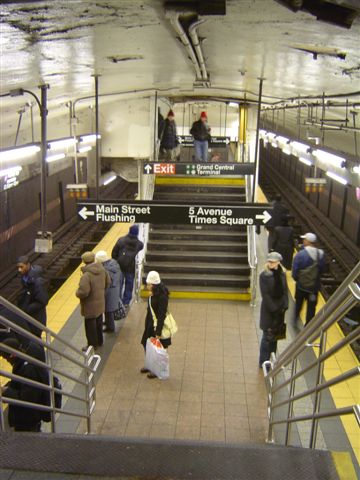 It is quite amazing that there are 4 – 6 tracks at the same station and there are so many platforms in one metro station. It is exactly typical train station in China. The only difference is, it is built underground.

What Metro system in Shanghai should learn from New York subway, which is at the age of its grandfather, is the naming and guidance system. At least there is no typo on the board. :-)

The Park Ave. and the Upper East part of 5th Ave. are the splendid miles. Houses with the same heights line up there. I guess the old houses must have been destroyed and rebuilt for many times to form the current uniqueness of the street scene. I love to say in the Park Ave. a little bit longer since it is the only place I found in the entire Manhattan that has sunshine so far. Other streets look like the deep valley cut buy knives from the baseline of the top of the buildings. There is absolutely no sunshine there. 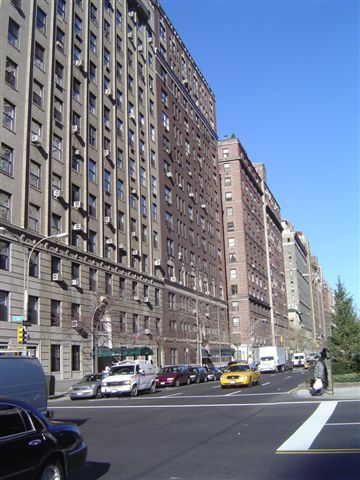 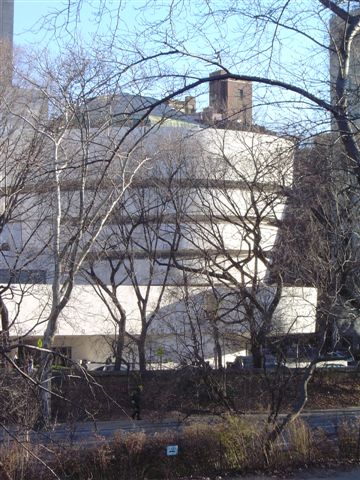 It may be the most famous roof in the world. 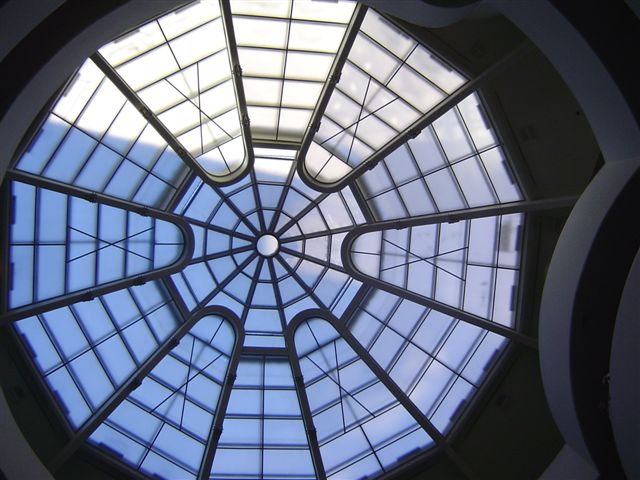 It is too cold today with the strong wind from the south. I found it impossible to march from the north-most to the south-most point. So we went across the park from the east to the west along the lake. It is a miracles that so huge a piece of land was reserved in the most expensive land in the world. On the other hand, the plan to reserve the land also helped to create the most expensive land. 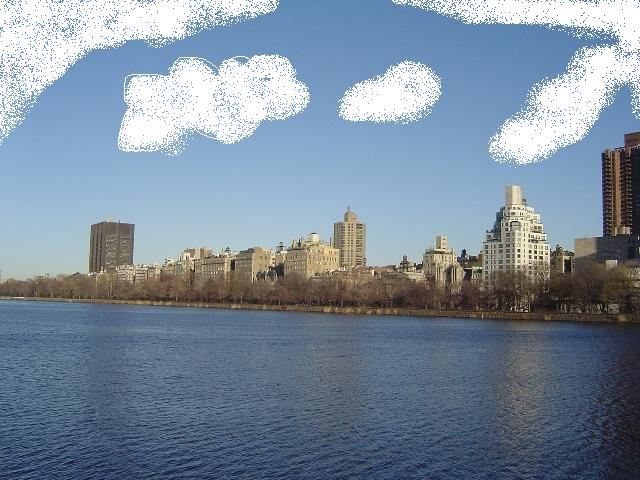 New York wake up at night. When we arrived the Lincoln center at the Broadway and the 65th Street, it was already 5:30 PM. The exciting ballet The Nutcrackers would start in 30 minutes. We bought the tickets at $20 and entered the New York State Theater. It is among the cheapest tickets in the theater, located at the end of the level 4, which is basically the second furthest seats from the stage. Since Wed is the off-peak time and the price is lower than tomorrow’s. The more expensive tickets were all sold out. 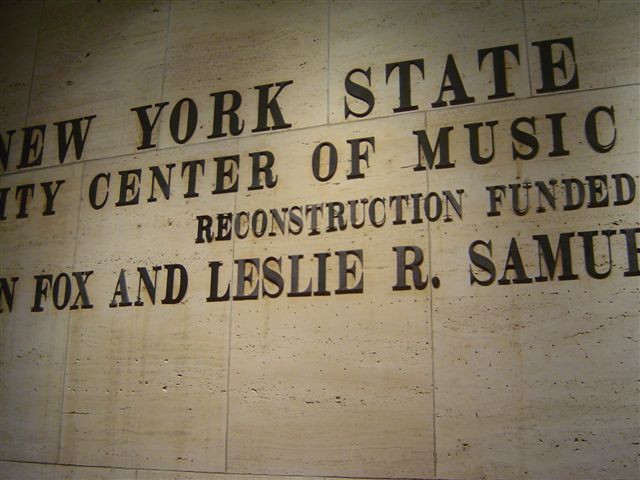 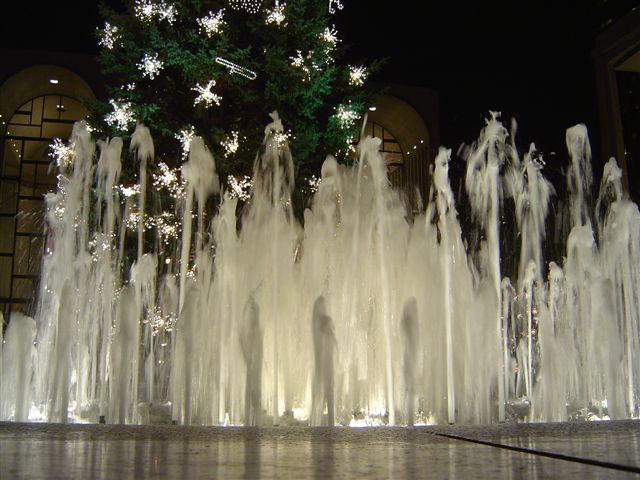 The theater is huge. Since it is not allowed to take pictures inside the theater, I can only take some pictures at the lobby. 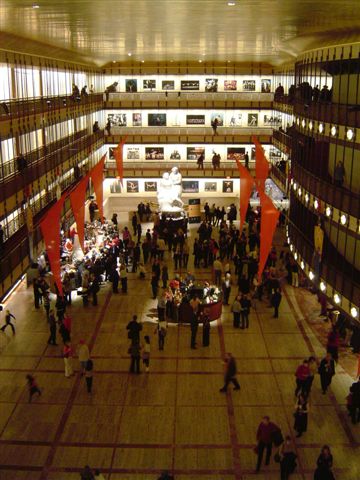 The ballet The Nutcracker is great. No wonder why this has been the 50th season for this ballet to serve as the holiday’s most splendid light. It will be performed at the theater six weeks around the Christmas. This is the forth time for me to visit a theatre. The previous one are the Holiday XXX, The Lion King, The Concert of Spanish Pianist and this, the Nutcrackers. It inspired my interest on performing art, and music. The number I visited museum, gallery and theatre is more than the whole year before. The most important take-away for my U.S. trip this time is art. 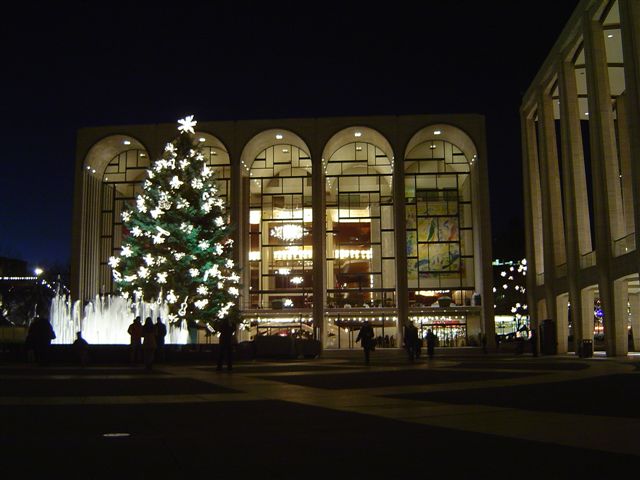 At night, the Lincon Center is like a crystal palace. More activities are still held in the other buildings concurently. What an exciting city! I love New York now.