I read two travel books these days: one on Boston (by Marie Morris) and the other on New York (by National Geographic Society). Both of them offer a section on transportation, like Entering Boston or Gates to New York. It is very helpful and let understand the locations of LGA or JFK.

This experience reminded me that not many people really know the difference between PVG or SHA. Let me explain it.

Here is the typical Jian Shuo Wang style of map: 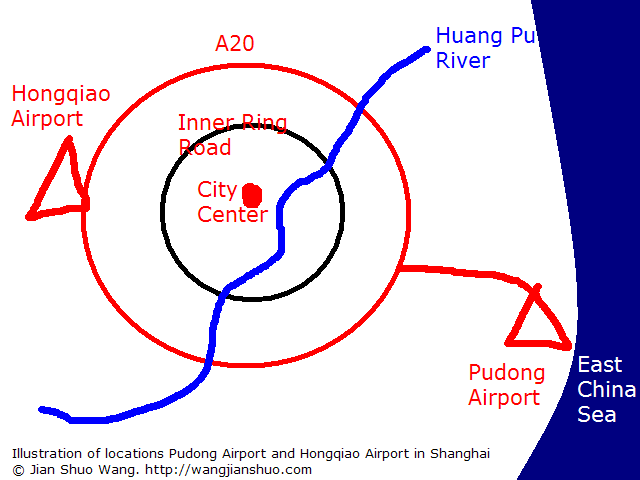 As you may guess, neither of the airport is located in the downtown.

Hong Qiao Airport (SHA) is much nearer to the city than Pudong Airport (PVG). SHA is on the west of the city and PVG is at the far-east. A20 is the outter ring of the city. SHA is exactly located at west part of the ring while the PVG connects to the A20 via a highway A1. You get the idea, right? Refer to the map.

Pu Dong Airport is bigger than Hong Qiao. With the second run way constructed, it aims to be an international aviation hub like Tokyo or Hong Kong.

Pu Dong airport has MagLev connected to the Metro Line #2. There is no Metro or Maglev for SHA.

There are airport buses for both airport, and Airport Bus #1 connects the two airports.

Avis serves at both airports.

Unless you are flying between Shanghai and large cities in China, like Beijing or Guangzhou, you often have no choices. For international flights, the only airport to depart and arrive is PVG. For many small cities, there are only very few flights every week and there is only one possible airport, SHA or PVG.

If you do have choices, you can consider the following factors: