What if we combine Webcam, Windows Media Technology, GPRS and a SmartPhone together? Here is the result: 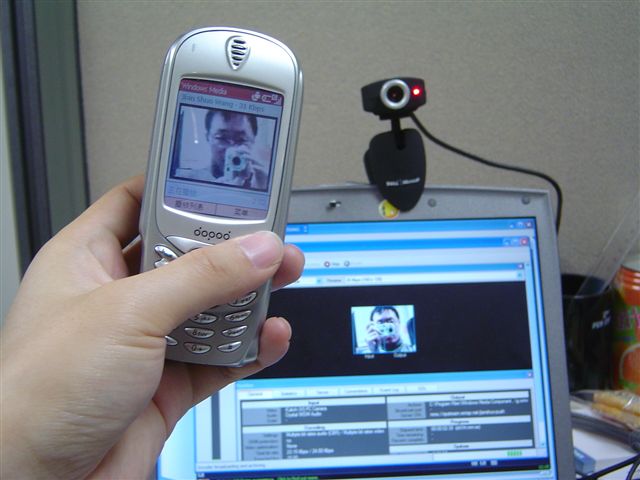 Video of my webcam is displayed on my phone in real time. There is serveral seconds delay between the encoder and the player. © Jian Shuo Wang.

I broadcasted the scene of my cubicle and use a smart phone to view it, in video, at real time. I can pull my mobile phone and see what is going on, no matter where I am, on bus, in Metro, at airport, in Beijing or in Hainan….

The Windows Media Encoder pushes the video stream from inside the firewall onto a Windows Media Server on public network. The SmartPhone Dopod 515 displays video using its Windows Media Player via GPRS.

Specification in This Experiment

The first problem in this experient is, the webcam is within the firewall and I have no permission to configure to the firewall. So I need to let users outside the firewall be able to see the video inside.

We are at Digital Age

I am so excited that my heart beat very fast after I see the video on my SmartPhone. It means a big impact to people’s life. This morning, I suddenly found I can turn Wendy’s phone into a radio. Just enter http://www.stv.sh.cn/990.asx and it plays the current East Radio Station’s program. Then enter http://www.stv.sh.cn/finance.asx, the mobile became a TV set – the real time TV program appeared on the mobile…