I send Wendy to the airport and she will begin her happy journey to Europe. She will have a meeting at Munich, Germany and visit Italy, Austria and France…

After I saw the China Airlines flight disappeared in the sky at 12:30, I had a walk outside the Pudong Airport. I bet not many passengers ever tried to walk out of the airport – it is by the sea and there is barely no buildings around.

Heading to the east of Pudong Airport, you can walk to the sea shore by theory – if there were not the trench. I will talk about it later. (East is the direction you face when you step out of the gates of the Departure Hall.) 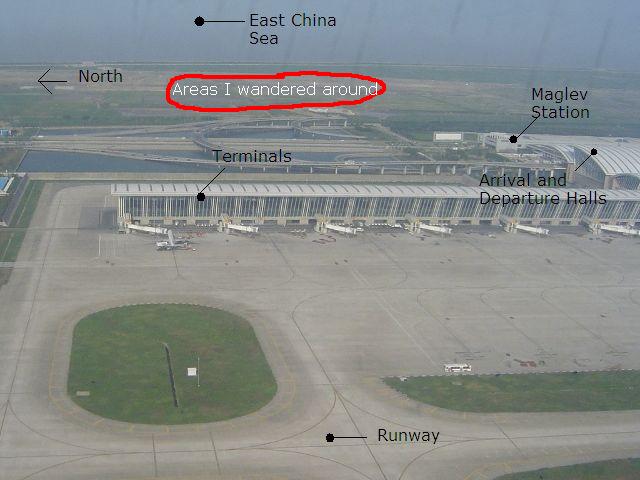 Passing the Maglev station, and pass the highways, and a wood bridge, I reached an area behind the trees – the massive ground area with no trees and no buildings. This is the report about the second runway and the second terminal building of Pudong Airport.

The authority is now working on the preliminary work for the second runway which is expected to be finished by the end of next year and has started to collect designs for the second terminal from firms worldwide. Xinhua, Nov 22, 2003

The vast empty land should be the Preliminary work. It is almost the same size of the current airport terminal. The land is about 1 meter below the land of the current airport. The “footprint” of the bulldozers are clear on the ground. I was surprised to see such a huge project base there. (Wendy said I maybe happier to be a construction worker – she always said so when I show my interest to the construction bases.)

I marched about 10 minutes toward the harsh winter strong wind and almost reached the sea shore, but a deep trench lied before me. It was about 2 meters deep and 2 meters wide and there are water inside. I have to turn left, hoping to get around the trench since I saw the left end of the trench. 15 minutes later, I said “shit” when I found out that the trench is a square, defining the area of the second runway and the terminal building. I have to walk along the trench and found the wooden gate through which I entered the construction base.

The shopping mall mentioned in the Xinhua report is also under construction. The building should have been completed, if I didn’t make mistakes.

Updated Got the GPS from Sebastian

I went to the SJTU Minhang Campus to meet Sebastian and got his GPS. It is a very nice GERMIN eTrex Venture. I entered to waypoints into the GPS: