As always, I waked up at about 7:50 AM. The sun had already climbed high into the sky. I have the thick three layer curtain (that kind with plastic opaque in the middle of the two layer of cotton) to block out light, so it feels as dark as mid-night even in the morning.

Well, I still had plenty of time, since my office hours starts from 9:00 AM – the typical foriengn-owned company schedule. Based on the traffic condition from my home to the place I work at, 30 minutes should be enough. As long as I step out of the door of my home no later than 8:30 AM, I will not be late. It is nice that I don’t have to get up earlier as many people in the state-owned companies whose work begin as early as 8:00 AM or even earlier.

This is a typical working-day morning – getting up, wash and brush my teeth, have an egg pie as breakfast. As I expected, I stepped out of the door at 8:30 AM sharp.

Crowded and Busy in the Morning

There is at least one disadvantages of getting up late, the only one I can think of – it is already very hot outside. It is the routine again – to choose from bus, taxi, and metro. Bus and taxi are the same – they need to slowly move in the traffic on the Caoxi Rd. North. It costs time and no one can predict how bad the traffic is. The metro station is within 6 minute’s work, but it is definitely not a pleasant journey in the hot and busy morning.

My choice today is to take the metro. Metro is always realiable and quick – as soon as you get on board. Well. Wait a minute. The Metro accident of last week changed my mindset about the Metro line. If you don’t know the event yet, let me tell you. The Metro line #1 experienced power failure in the rush hour in the morning. The worst thing is, there is no working backup power supply. So 450,000 people were left on the metro stations. Of cause, bus and taxi are impossible to find. Most of them was late that day, including me. It is considered as one of the worst accident in the history of Shanghai Metro Line. For the first time, the GM of Shanghai Metro Corp. appologized for the pause of operation to the citizens.

I used 2 RMB for the single trip train ticket. Don’t get me wrong. Round trip tickets are not available and there are other prices for the ticket (there are 4 RMB and 3 RMB tickets). The automatic ticket machine works very well – I seldom see it went wrong, while the multimedia guide kiosk seldom work as they are designed. It prooves that software is still not as realiable as stones.

The Metro is at the end of the business hours in the morning when I got on board. People getting onto the train are more than people getting off from the first station at Xinzhuang all the way to Cao Bao Rd. Station. So at the time I entered the train, it is almost about 90% of the maxium possible load.

The Xujiahui Station is the first station where many people will get off the traini. My estimation is that about 1/5 of the passengers will get off. If you are interested, the People’s Square Station is the largest dropping-off and get-onboard station in Shanghai.

I happen to find out an old picture about the Xujiahui Square at night. It was taken when I just bought my digital camera. 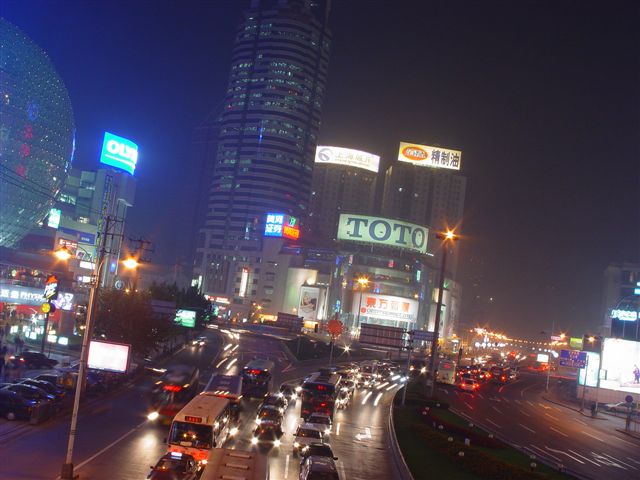 The Xujiahui Metro Station entrance and exit is just located on the left part of the picture under the large glass ball, near the PizzaHut pole.