You know what, finally, I bought Sony DSC-P8 today. I am choosing between Sony P8 and Nikon E4300. Thanks for Christina from Chinese tea and Li Jinyi to give me the suggestions. I feel a little bit embrassed that although Li is suggesting that Sony is so-so, I still paid for it and get one.

I like Nikon since it sounds more professional – actually it is profession in terms of image quality and the lens. But it is completely unacceptable for the Purple Fringing. Check the photos on dpreview.com. I found the same thing in many Nikon 885 photos on many other sites.

I am excited to have Sony DSC-P8

I proudly announce that I have digital camera now and I can add more pictures of Shanghai into this blog. My plan includes a series of photo for Starbucks – according to Luo, there are 26 Starbucks in Shanghai.

Many other friends also suggested me to take something and put it online, for example, the new Suzhou rivier, the new Lupu bridge… a lot of pictures. Now I can show more rich and informative Shanghai guide soon. 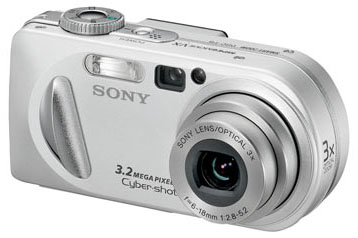 Nice to hear from Annie. She is at the Pudong airport and she is able to access this webpage! Isn’t great. Read her comment and check out how she did it.

Note that there is a new Internet Cafe near the Gate 20 of Pudong airport with 6 clean computers.

After two years, I still enjoy Sony P8 and took thousands of pictures and post it onto this site. It is a very cute camera. The best part is, it does not require any driver to transfer photos to a computer.