Skip to primary content
This is third article of Dr. Glenwood Irons’ trip to Shanghai.

In A Journey of the Plague Year, Defoe frequently walked about London, keeping up with his daily habits, but also he wanted to see firsthand how the Great Plague was affecting what he certainly thought to be the greatest city in Christendom. He often noted how certain shops were closed, how certain places seemed less habituated, and how Londoners often kept a careful distance between themselves and others. In other words, he saw his city as a much-changed place, one that had been deeply affected by all the fears one would expect from a Plague-threatened populace.

Shanghai is no such place. Yes, it has certainly been affected by this modern Plague, and there is no doubt that business is down in many restaurants and tourist haunts. Even the horrific Shanghai traffic isn’t anywhere near as bad as during past visits. But the ubiquitous masks which grace just about every face on the news broadcasts from Beijing are, in fact, almost unseen here. Except for those who work in places which serve the public, hardly anyone else is wearing a mask. Perhaps this is simply part of the attitude which the Shanghainese often express as the main difference between themselves and Beijingers, but I originally saw the lack of masks as an indication that things are essential “normal?in this city of almost 16 million.

As it turned out, the “normalcy?is rather more on the surface than anywhere else. The cab driver in my taxi from the airport to my flat at the New Harbour Apartments in central Shanghai didn’t wear a mask, but he also didn’t have the air-conditioning on in the car because, as he pointed out, the breezes would prevent SARS. And when we arrived at the reception desk for my “serviced apartment? both the receptionist and the chap who put my credit card through the electronic sensors wore masks. And without even a by-your-leave, one of the receptionists stuck a (sterilized) digital thermometer in my ear, and took my temperature. This was immediately logged onto a form which would be used to indicate my twice daily temperature reading. Also, I was placed on a floor which was reserved for those who had recently arrived in Shanghai (many of the flats are for long-term guests). Now I was beginning to feel the “new?SARS-affected Shanghai, but actually I found the daily temperature checks to be a relief, as I no longer had to worry, at least about my body temperature.

In the morning of my first full day in Shanghai, I decided to walk over to the famous “People’s Square? about 15 minutes from 88 Yongshou Lu, where I was staying. I passed many of the small restaurants in my quarter, and noticed that they weren’t jammed with customers as they would have been at any other time. I thought perhaps that, this date being the part of the May Holiday which was still left by the Chinese Government, there were fewer people at work, and thus the “dumpling & dojong?houses were less than full because of that. So, I expected the People’s Square to be full of kite fliers, sightseers and others. Well, there were many people surrounding the beautiful fountain, and there were a few kite fliers, but there were also many outside workers from the Shanghai City Government spraying antiseptic on just about anything which didn’t move or grow. As I sat on one of the marble benches in front of the Museum, I immediately noticed one of the workers sterilizing a refuse container right beside me. Good for the Shanghainese, I thought, hoping that such sterilization on a mass scale might make an important difference to the economy of this city.

Later that day, I had a meeting at one of Shanghai’s most important universities, and there I noticed the real difference which the fear of SARS had created, most of which “difference?would not be available to the average tourist. First, I wanted to get a picture of myself standing in front of the famous statue of Chairman Mao, in fact one of the few left standing on Chinese university campuses. But I was stopped at the University gates by an officious guard who asked me for my faculty card (in Chinese of course). I do have a rudimentary understanding of Mandarin, so I whipped out the business card of the Dean who had invited me, and that did the trick (with some help from a passing faculty member). But I noticed that every student was checked for id, and most of them were on bicycles, a mode of transportation which has only recently exploded in Shanghai (once again). So, I asked that same passing faculty member to take my picture in front of “the Chairman?(I’ve attached it to this file), and that made my day, not because Mao and I have about the same amount of hair, but because I thought there was a passing resemblance to the great man and myself (in all modesty, of course). Chinese readers will note that (as I’m often told by my Chinese colleagues), I also look a lot like Dr. Bethune, so at least there is a Canadian connection too!! 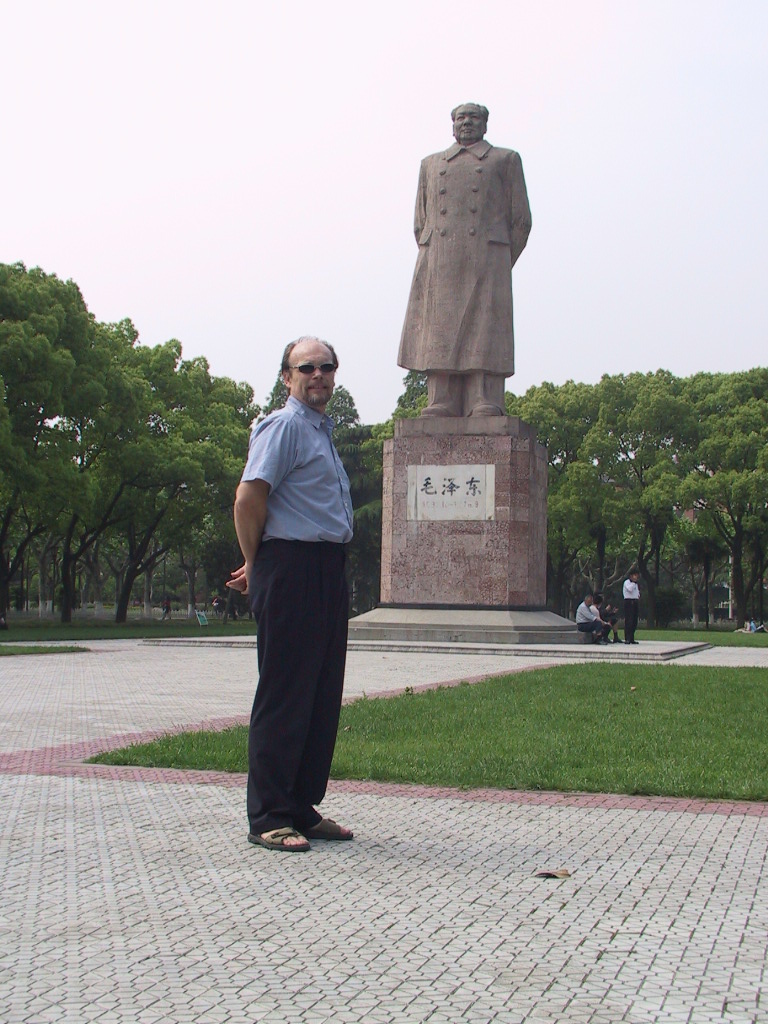 Okay, enough of that. I crossed the main road to the building where I was to have my meeting, and noted a hastily posted Chinese sign in the window of the entrance doors. “As a result of the SARS epidemic in “the People’s Capital?and other parts of the “Middle Kingdom?(Zhongwa), and in order to maintain the health of our community, please use the rear entrance.? So of course I complied, and was soon accosted by another security guard who checked my documents (the Dean’s card had worked well thus far!!), and allowed me in. I noticed that students also went through this ritual, and one young female student was denied entry because she didn’t have her card. Now, I won’t tell you about the meeting (the details would simply bore you), but I will tell you that I was treated almost like a hero by the Dean and a few of his colleagues whom he had managed to round up. This was to happen many times during the next few days of meetings since, as it turns out, very few foreigners have had (what my colleagues called) the “courage?to visit Shanghai, much less other parts of China. I explained that there was nothing heroic about coming to this eternally interesting city, but decided not to push the matter, as it isn’t every day one “rises?to the status of hero!

On the return trip to my “New Harbour?flat, I also noticed the lighter traffic on the expressways into Shanghai centre. This trip would normally take me 45 frustrating minutes, listening to the cab driver curse all along the way, honking his horn and speeding up whenever a break would come. Not this time. We made the trip in just over 25 minutes, almost half the normal time it takes. Which was a blessing, as I was looking forward to a brief afternoon nap before getting back to my e-mail and other work-related business. But not before my afternoon temperature check at the reception, the reading for which was essential the same as the morning reading.

I had planned for a relaxing evening in the flat. However, I was pleasantly surprised by a call from a colleague who wanted to take me out to dinner. He wanted me to meet his charming new wife, and also to talk a little business in preparation for our meeting at a brand-new private school the next day in Pudong. When we arrived at the famous “Zen?restaurant, situated in (I believe) Shanghai’s Duolun Lu Cultural Street, I was immediately struck by the fact that we didn’t need to stand in a half-hour queue to get into the place. I had walked by “Zen?on other occasions in Shanghai, but I had never been willing to put up with the wait. There was no wait that night, and in fact we enjoyed a wonderful meal with very attentive service (actually service in Shanghai restaurants is always attentive), surrounded by the most interesting all-black furniture and décor. The windows were all open, and my friend was extremely generous with my favorite beer, Quing Dao Gold, so who could possibly complain. In fact, my colleague suggested that he almost enjoyed the restaurant better like this!

Next time, I’ll complete my entries for this “Flight to Shanghai?story. In that entry, I will briefly describe my final days of meetings, my departure from Pudong Airport, my flight to Bangkok, and my arrival at Don Muang Airport itself. I will also venture a few meditations on the present state of travel and the economy in Asia, primarily as a way of affectionately completing my “Journey?

12 thoughts on “Flight to Shanghai: A Journey in the Plague Year III”