To my surprise, I found my site was listed on MSNBC.com. Here is the URL:

In a similar vein, Shanghai blogger Jian Shuo Wang is using the help of e-mail from friends to disseminate SARS information on his blog. “Emails are always quicker than local newspapers,” he points out. As early as February 12, before the illness was even given a name, Jian Shuo Wang was relying on, and blogging about, reports from friends in Guangzhou about concern over the disease taking serious hold on the population there. 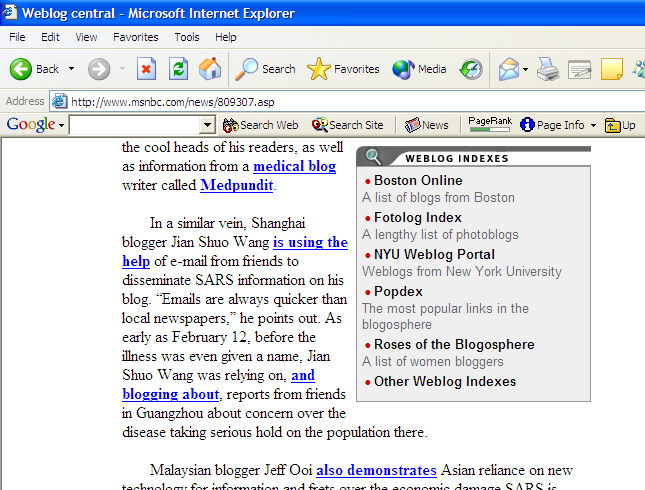 I love the idea of Weblog Central on MSNBC. It is the “gates to the world of personal news”. The best thing is that it gives chances for small sites to be listed on the famous news site. My friend R G runs his site of Tiger Cafe and was listed as Best Food Blog. He was also very happy about the link.

Want to know people really feel in a SARS infected areas? I can tell you. Before 11:38 AM today, I can still talk about SARS, the data of infected people and how serious the problem is with ease. At 12:38 AM, I saw the first person wearing mask on the street. At 12:40 AM, I saw the second.

I suddenly doubt the quality of the air – I felt shortness of breath and difficulty breathing. It is true – I mean physically. The world suddenly seems so dangerous – just like everyone is dangerous. Although I feel OK very soon, but I do remember the feeling of the shock at that time.

To realize the danger and to feel the danger are too different thing. When you realize the danger, you are not worried. What do you think if you know that in Guangzhou, the traffic accidents killed 1739 people in the city of Guangzhou in the year of 2002 alone? (source: pcauto.com [Chinese site])? You are not scared and the travel and business trip to Guangzhou will not be paused. This number is much larger than the number of SARS infected people in Guangzhou. But the world is just more concerned about SARS than traffic accident – it is not because SARS is more dangerous, it is because people can feel the danger.

3 thoughts on “This Site Listed on MSNBC.COM, as SARS Blog”