I attended the TEDxShanghai event today (May 20, 2012) at the Shanghai Concert Hall.

TED means Technology, Entertainment, and Design. It was started in mid-1980s, and kept the vision of “Ideas worth spreading”. The famous TED main conference in California charges 7500 USD for each participants, and is sold out soon.

TEDx is independently organized TED event. It is brand licensing model, like franchise. It is non-profit – all profit needs to go back to the TED organizing itself. There are strict rules of each TED event – the rules makes the TEDx events pretty consistent with the main TED theme.

The location of the TEDxShanghai this year is a great one: the Shanghai Concert Hall – one of the best reserved old Shanghai time architect. The hall may have been destroyed when the Yan’an Elevated High Way was built. Some creative guys thought about the idea to move the building. They lifted the whole architect up, and moved 66 meters southward, and even lifted it 3.3 meters higher. It was an amazing project. The current Shanghai Concert Hall is just as new as a century go.

This is the outside facade of the building. 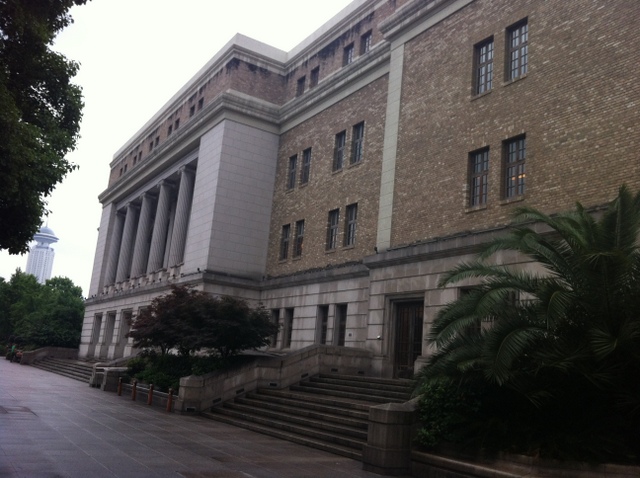 The inner roof of the building – magnificent. 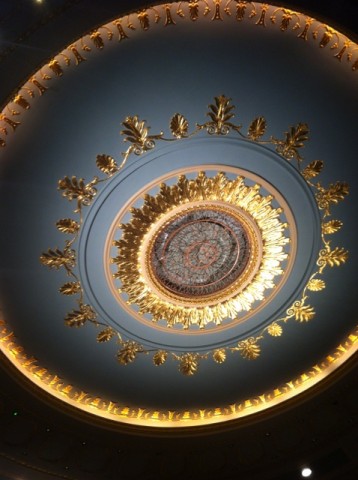 As the TED style, the VI was consistent (good). This is a ticketed event. People need to hold tickets, but I believe the tickets are free. Among the audience, the key sponsor Kraft held many seats. 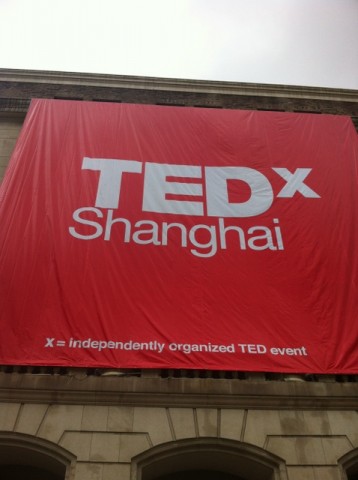 This is the stage of the TEDxShanghai. A big screen with TED-red backdrop. The logo implies the theme of the event – an international gathering which happens to be in a city in China. During the event, English and Chinese are alternatively used. 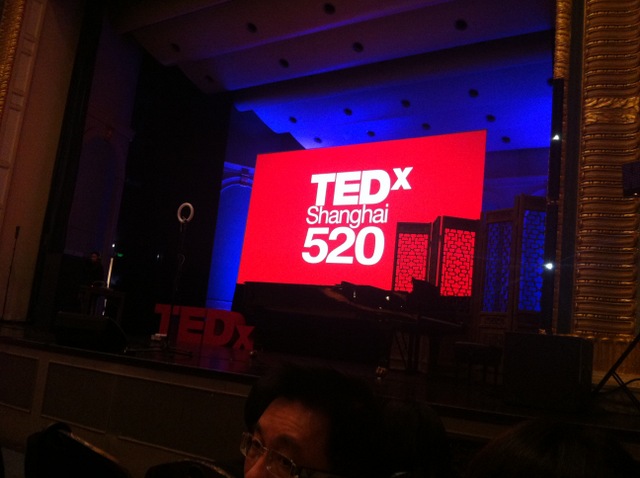 It was a surprise how many people attend it. 950 seats were sold out, and there are people sitting on the stairs of the aisle. 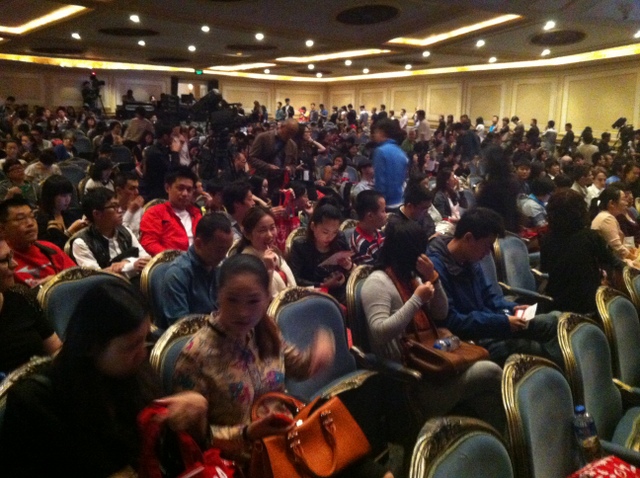 During the event, it is pretty “TEDDY”. A good speaker with some simple slides. 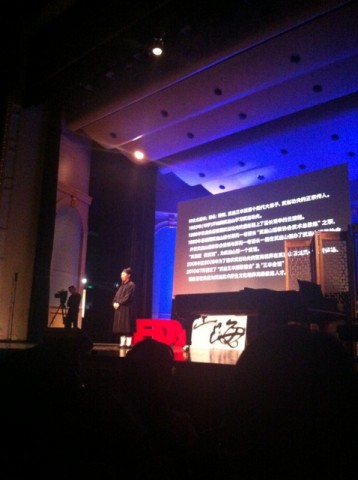 There are even interactive events outside – on the square before the Concert Hall. The Taoism Taichi master taught participants to play Taichi. 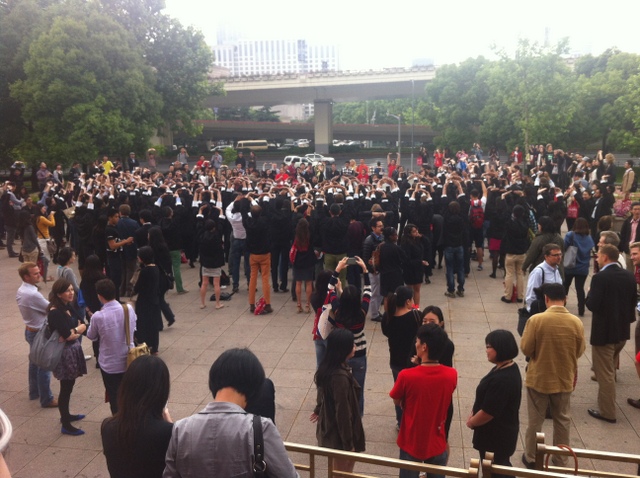 In this event, the most presented topic is art, and music – the E in TED. There are some D elements, but I didn’t see too much T. Below is Jasmine Chen, Jazz artiest was singing Chinese folk songs with Jazz music. 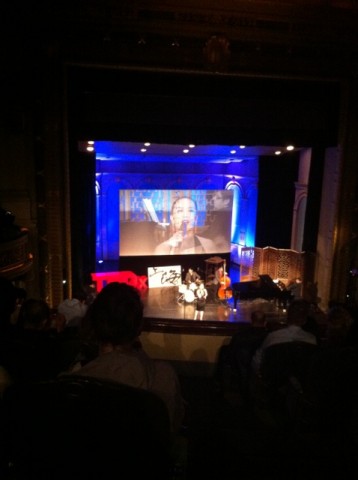 The highlight of the event was Jimmy Choo’s presentation: The First Step of Making Shoes in Penang. Jimmy Choo was a famous shoe designer (known as Princess Diana’s shoemaker), and he was surprisingly supper humorous.  He demonstrated the steps to make a shoe on the stage with some funny flavor in it. I run upon him during the break and took a photo with him.  (P.S. I actually not feeling good to take a photo with celebrity like this. I would love to be introduce with someone by a mutual friends, and had some deep conversation, and we know each other for what we do and what we are good at, not just a wax-statue type of posture picture. I will take less of this kind of photo). 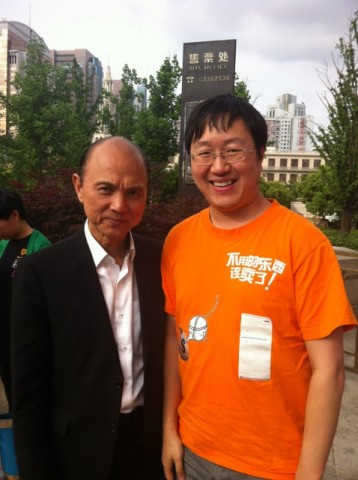 The biggest inspiration from Jimmy Choo’s presentation for me was, if you want to be good at something, you need to be really passionate about it. Jimmy Choo is famous, but he is so good at making shoes, and he still enjoy making shoes in public! Again and again!

The life line of an event like this is the quality of the speakers. I would say about 1/3 of the speakers are well above my expectation, and many aren’t. I am not saying they are not delivering good speech. They all did, but based on my knowledge of TED standard, they shy a little bit from that line. There are many things the organizing team can do to help. For example, the Taoism Taichi presentation – if the presentation was structured with a Taichi show, that is much more powerful than speech. A pity that they didn’t show their best. Looking forward to the next time.

TED Rules and Its Enforcement

The surprising part of this TEDxShangahi event was its violation of TEDx rules (Lawrence knows I will write about it). There are three sessions directly related to sponsorship at least. One is the KRAFT’s session, the second from Shanghai NYU, and the third is the Peneng Philharmonic Performance, because KRAFT, Shanghai NYU, and Peneng Tourism Bureau are both sponsors of the event. It was clear stated in the TEDx rules that no sponsors can speak during the event, and more interestingly, no speakers can later spouse the event. The rule is well understandable to keep the distinct line between sponsorship and editorial, and to keep the integrity of the event. This is an obvious flaw of the event, but I am sure the TEDxChina, and TEDxShanghai team were aware of it and will fix it.

In conclusion, it is still a fantastic event, and it offers great value to the audience. I’d like to thank the speakers to take the time to speak in the event, to share, and to inspire people like me. I am definitely interested to be involved in future events like this.