In this article, I am going to talk about the Beijng Airport Express in depth, just as I talked about the Pudong Airport Maglev Train.

Beijing Airport Express is just opened one month before the Olympic. It has four stations along the line:

Please note that there is only T3 to T2 train and there is no reserve direction trains. The T3, T2 and Sanyuanqiao is just like a big circle – the train only goes counter-clockwise.

25 RMB (or 3 USD) for single trip, no matter which train station you get off. If you want to get to T2 from T3, they provide free shuttle bus. Please do not take the train if you want to save some money.

I took the train from Dongzhimen to T3, and it took about 20 minutes. From T3 to Dongzhimen may take about 30 minutes (considering the 3 minutes stay at T3 and go back via T2 and the stay there).

The T3 Station is in the huge turtle shell, as I described before. It is at the south of the giant T3 station. 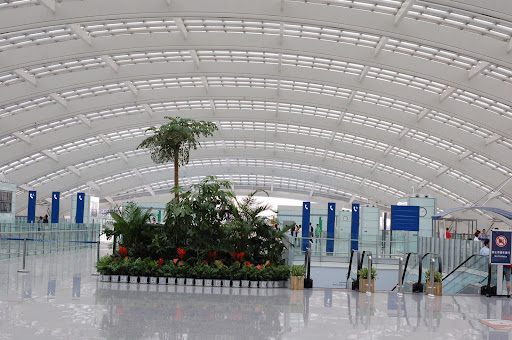 I have more photos of the station in this entry: Beijing Airport Express Train.

Sanyuanqiao station is exactly at the Third Ring Road and the intersection of Airport Express way. It is at the northeast corner of the city. If you know a little bit of Beijing road system, the Third Ring Road of Beijing is the major back-bone roads in Beijing. The Airport Express Road Station is connected with the Beijing Subway Line #10 Sanyuanqiao Station via a short tunnel – about 30 meters long. It is very convinient to transit.

The Sanyuanqiao and Dongzhimen stations enable passengers to transit easily to other subway systems in Beijing. In this sense, it is designed much better than Shanghai’s Maglev.

Here are the photos of the ticket – front side and the back side. 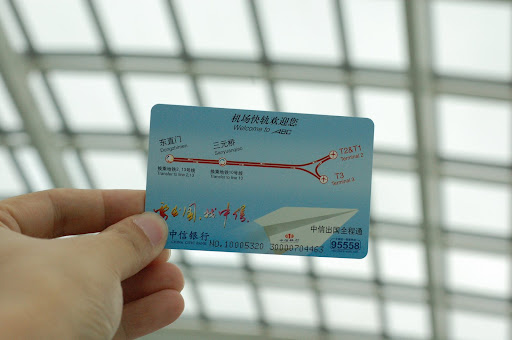 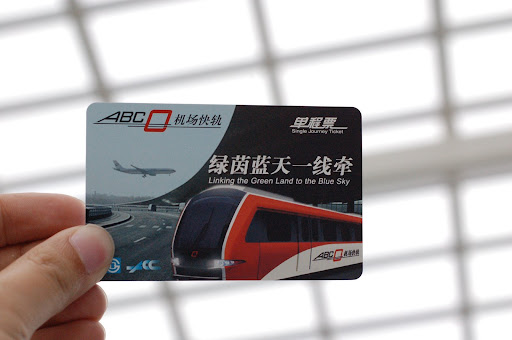 On the back side of the ticket, it prints the route of the train.

It will be withdrew when the train arrives. It does have the paper based receipt that you can reimburse if you are on a business trip.

This is what it looks like inside the train. 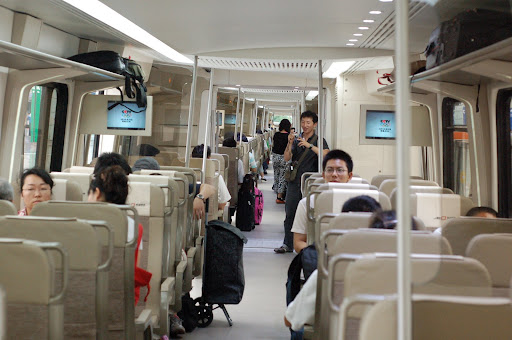 On the train, there are screen broadcasting some sports program. Unlike the commercial in Shanghai Metro, it seems non-profit. 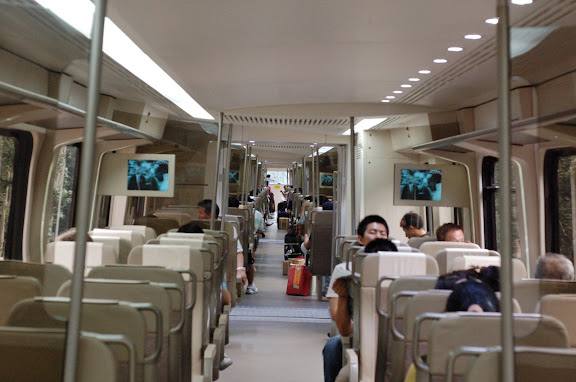 This is the track looking from the front of the train. 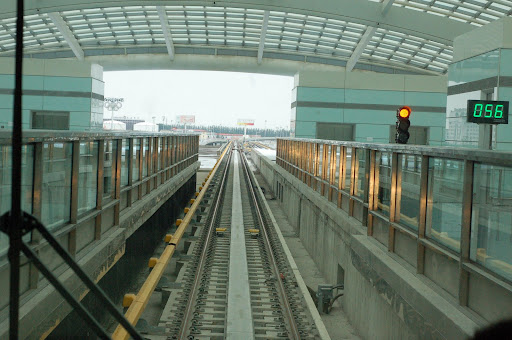 This train has open space for the operator that you can stand behind them and watch the front (or the end) of the train.

This is the track transit junction just out of the T3 stations. 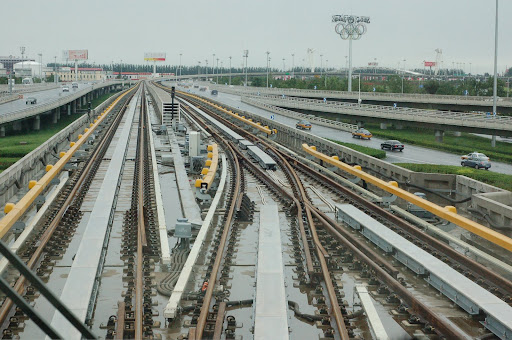 A switch will made the train turning to the right lane, which leads to T2. The left track is where the train come from – the Sanyuanqiao Station. If you look at the photo clear enough, on the top of the light pole, there are Olympic 5 circles.

On the left the track, you can see the big entrance of the Airport Express Way II. 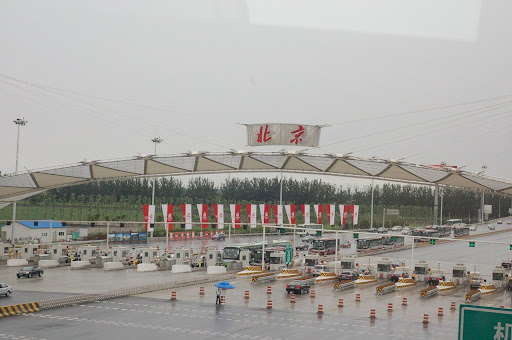 You will see this giant place – for collecting tolls for cars entering the airport.

On the left on the way from T3 to T2, you can also see the many tracks for parking the trains. 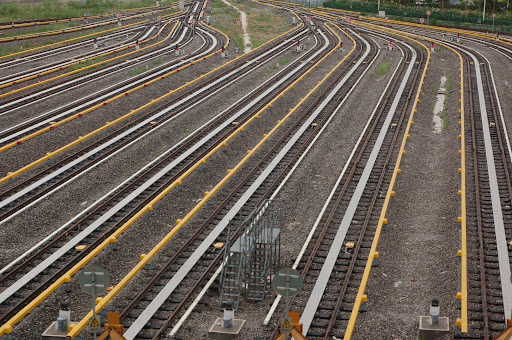 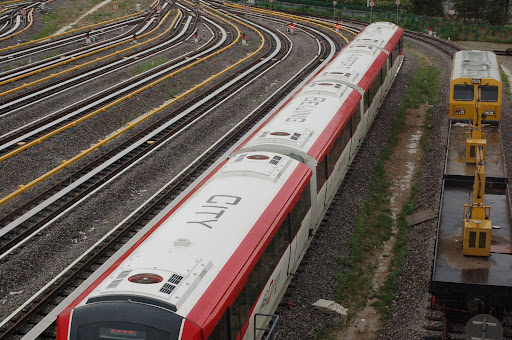 It is visible event from the airplane.

Immediately after passing the parking area, the train will run into the underground section of the route. 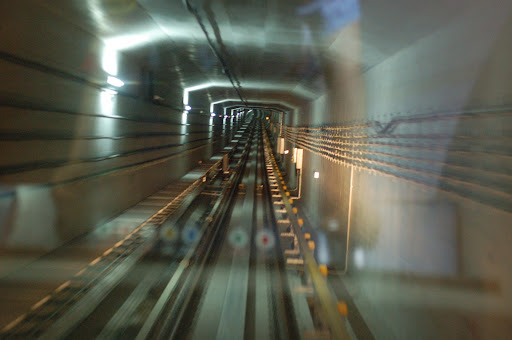 As you can see from the photo above, at the very beginning, the tunnel is in shape of square, which means it is built by digging the ground and put a cover on it. Very soon, the tunnel will turn into round tube: 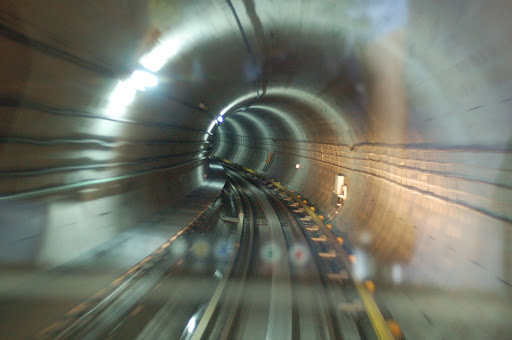 The journey lasts for several minutes, and ends at the T2.

Getting back to the city, and getting through the same tube tunnel, the train gets back to the ground and reach the elevated track: 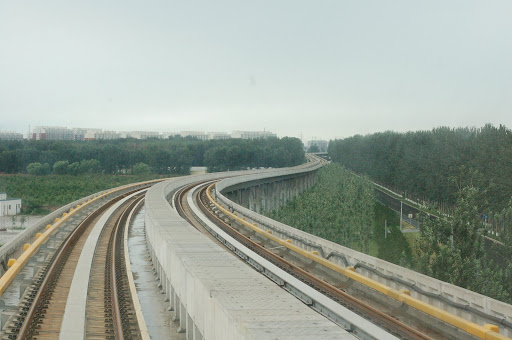 When the train travels on the ground, you can clearly see the Airport Express. The train track is surrounded by high trees. Sometimes, you feel that you are traveling in a forest. The slogan “Green Olympic” starts to echo on my ears. 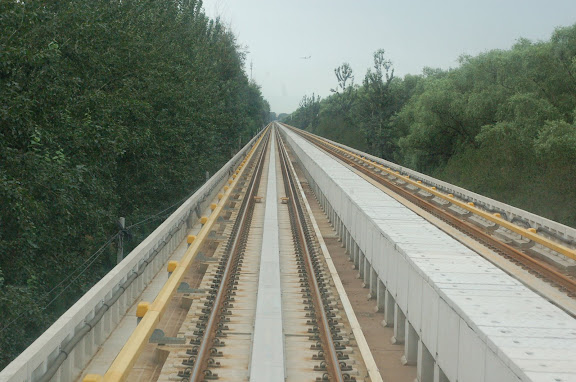 Along the track, you can see the Ikea store. It is the intersection of the Express Train, and the 4th Ring Road. The place is called Suyuanqiao: 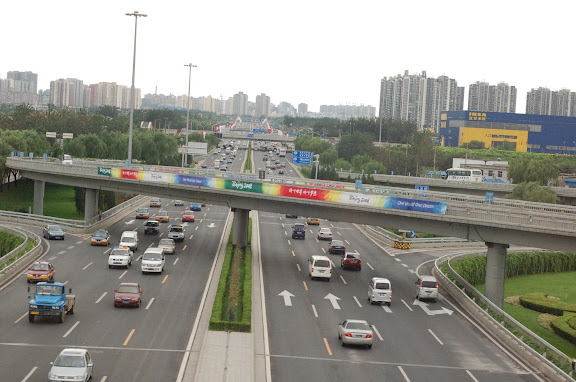 Here is the map on the wall of Train Station of Subway Line #10. The Airport Express Sanyuanqiao Station is connected directly with the Subway Line #10 station. 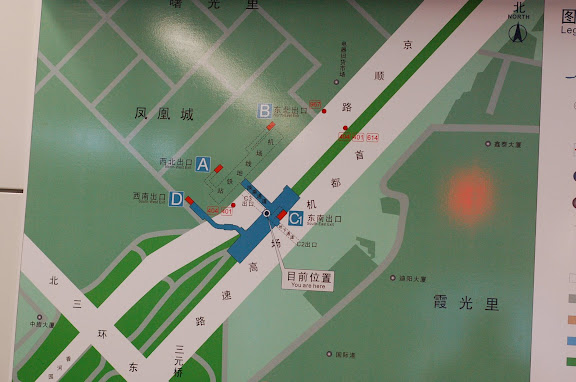 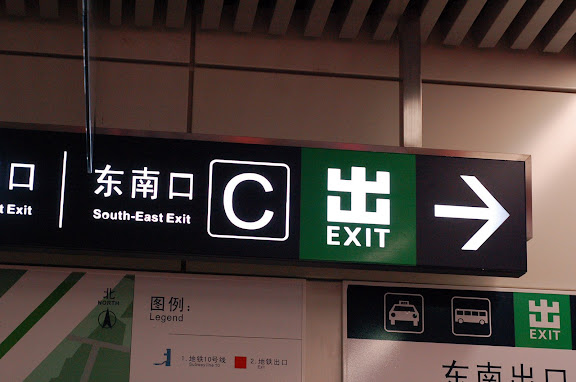 You can leave the train station very soon. As you can see from the map, the two stations are only 50 meters away from each other. 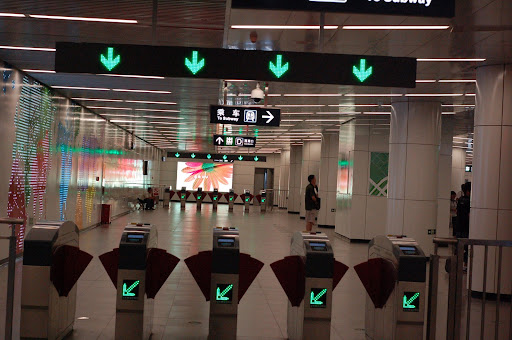 Want to know how far the two stations are? Look at the photo below: 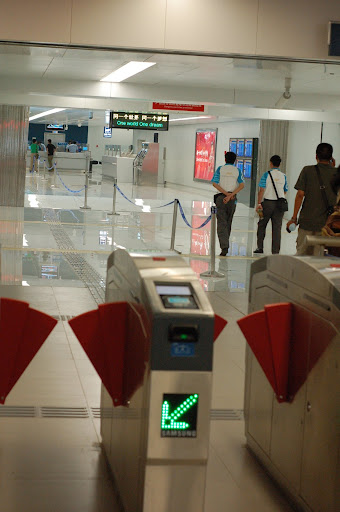 The Dongzhimen station is also very closely connected with the Beijing Subway #2.

The two stations are connected by a short tunnel. 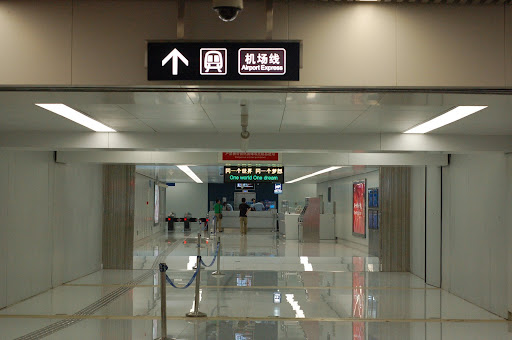 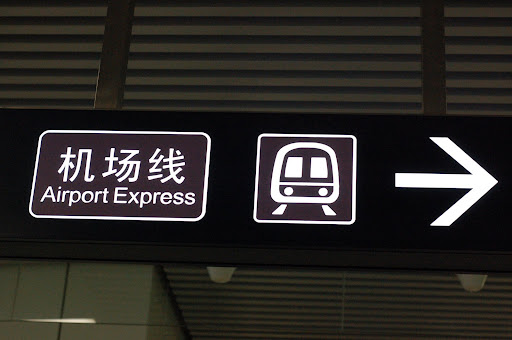 I have to say, the city planning and architects of the subways did wonderful job. They designed very good transition stations that people can get to almost everywhere in the city via the Beijing Airport Express.