Today (Friday), I am on my way back to Nanyang, Henan Province. It is about 1000 km west of Shanghai and 4 hour’s train ride from my hometown Luoyang. Nanyang is the hometown of Wendy. Due to some family issues, we have to get back together with Yifan. I will stay in Nanyang for 6 days starting from today, and get back to Shanghai on Wednesday. For me, it is the third time I am in Nanyang – a city in central China, and it is the third very good chance for me to understand China better myself.

Recently, during the discussion on this blog, it seems they key question people asked was about "who know China better, people in China or from outside?" It seems so simple a question that how can people outside a country claim to know a country better than people who live there? Most of the cases, people believe so, but when there is no freedom of speech and strong power of propaganda, the question is not that easy to answer. Western media tend to think people in China don’t know truth at all, and even if someone claim that they know the truth, they are simply brainwashed. The debate goes on and on…

I don’t think I know China. Although I lived in this country for 30 years, and lived in Luoyang for 17 years, in Tongchuan of Shaanxi Province for one year (when I was very young), and in Shanghai for 13 years, and traveled to all major cities frequently, and even stayed in city like Beijing for 2 months, there are still so many places I haven’t been too. The even bigger challenge for me to understand my own country is, to visit a place physically does not mean to understand the life there. I know Luoyang much better than any other city since I lived there, and of cause, Shanghai. Nanyang is the third city in China that I have a chance to get closer to learn because of Wendy.

Shanghai does not Represent China and Culture Shock

I devoted my last 5 years to report to the world about Shanghai, and many reader thanked me to help them understand China better. I would want to add a note that although Shanghai is true China (just like a leg of the elephant in the story), it does not represent China. For my friends in Shanghai, I want to remind them that Shanghai is not China.

In my Chinese blog, I am often attacked by people outside Shanghai about some point-of-views. I know they do have the reason to disagree with me, since it is for sure the life and thoughts in different part of China is very different.

In the next few days, Wendy, Yifan and I will spend very long time with her family (I am not sure whether I should disclose it, but Wendy’s grandmother just past away, and it is the local tradition that everyone in the family must get back no matter how far away they are, and how busy they are. Since Wendy’s grandmother is already almost 90 years old when she past away, there are not too much sorrow as others. In China saying, it can be regarded as the "leaving with happiness" for respected people who enjoyed long life). My other goal is to take the first hand opportunity to learn China better. I was trying to do it with sensation in the last few years, but the more I learned only revealed the more I don’t know.

Just as the Tibet discussion in the last few weeks, but very few of us (no matter on which side of the camps) have ever been to Tibet ourselves. Being part of a big family in Nanyang is sweet for me, and I want to learn more, and share.

Hopefully, the 6 days will contribute to this blog, so people will see another part of China, and add more Nanyang flavor to people’s perception of China, other than the strong flavor of Shanghai, on this blog.

Please stay tuned, and ask questions to me. I hope the questions will be more related to central China (Henan Province), so the question may help to guide me to observe things I may not notice. 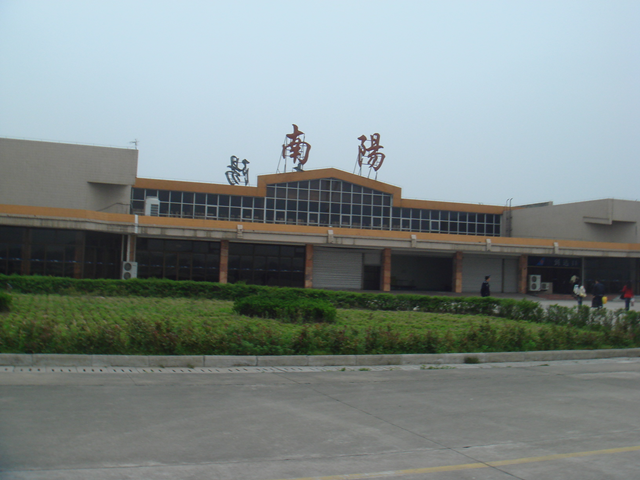 Above: Nanyang Airport, and a small terminal.

2 thoughts on “On My Way Back to Nanyang”