How exciting! Shanghai Pudong Airport Terminal 2 just opened today – exactly today, and I am lucky to happen to travel to day, on March 26, 2008. So I had the opportunity to experience the brand new terminal on its first day. Here is my report. 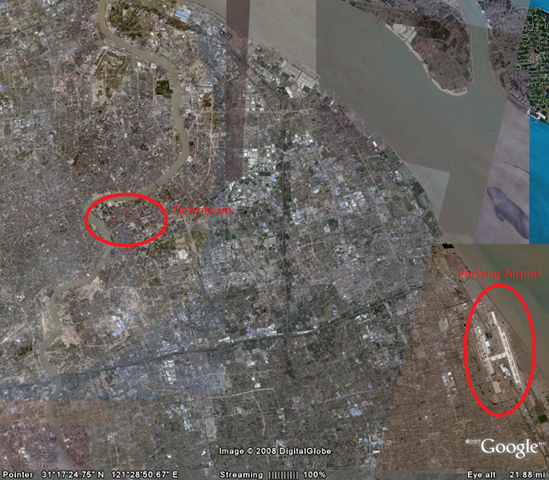 There are one terminal building in Pudong Airport and two runways. Now, the second terminal – almost the same shape of the first one was built and put into operation today.  With the two airport and 3 runways, it has 224 plane parking lot, 70 boarding bridges, and 2.4 million square meters of plane parking area. Now it has the capacity of 60 million annual passengers with 60 airlines covering 90 International cities, and 70 domestic cities.

The second terminal is much larger  than the first one. Here is a table:

My Journey of the Pudong Airport Terminal 2

My journey started from the Maglev train station. The train station, and the track are the perfect line dividing the airport into two part – on east is the T2, and on the west is T1. These two are pretty mirroring each other, with connecting walking path. 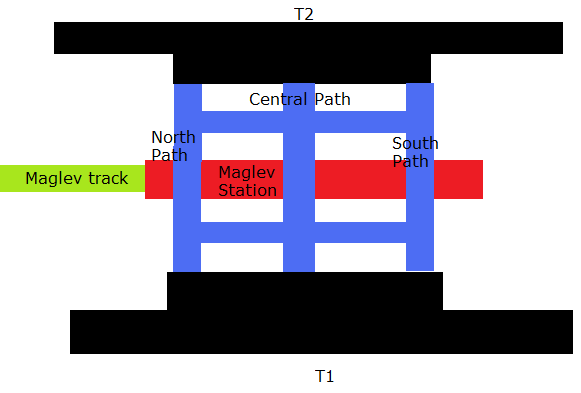 I started with the red building, and immediately after you leave the Maglev and use the elevator to get to the second floor of the Maglev train station, you have an important decision to make: going to T1 or T2, since they are on opposite side of you. They have a table to help you figure out which terminal you should use. 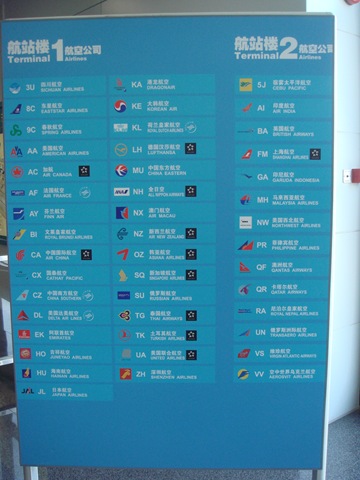 Caution: This map is only valid for a very short period of time (one month), and when you are checking this back, it may already be out of date. Check with latest information, since when the chart was drawn, the airlines are in the transition period.

I decided to use T2. turning left (or right depending on which wing you are in the Maglev station), you see the central path: 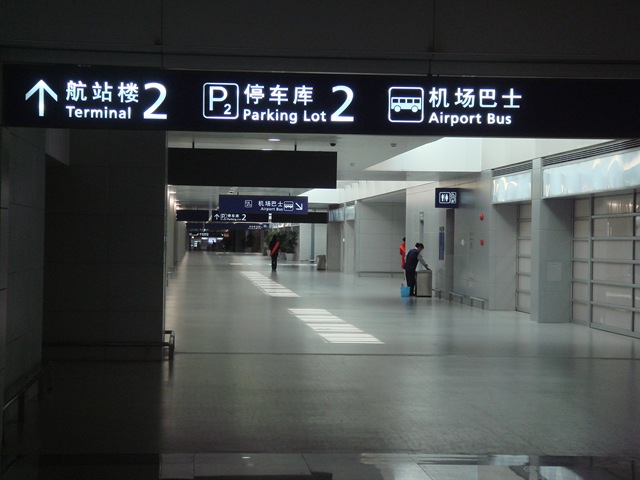 To my pleasant surprise, the Central Path, is full of sunshine. It is wider than the T1 since it combined the two path into one wider path, and have windows on the ceiling. Look! It is very bright! 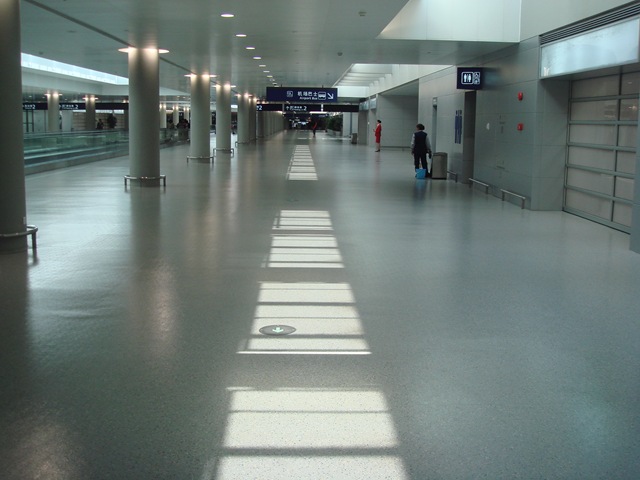 The ceiling with curtain made it a perfect combination. Look up! 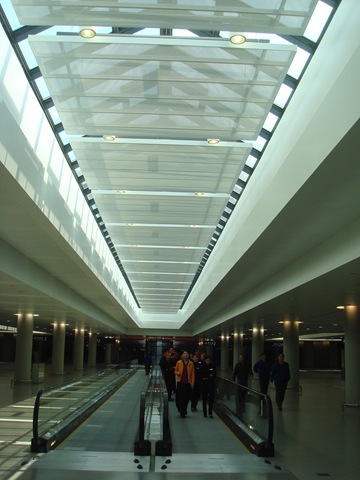 At the middle point of the Central Path to the T2, there is an exit for the Airport Shuttle Bus. The bus still start from the T1, as I described in this article: Bus Schedule of Shanghai Pudong Airport. This bus station, on the east side of the Maglev train provide service to T2, as the first stop of all airport shuttle bus, before they leave the airport. 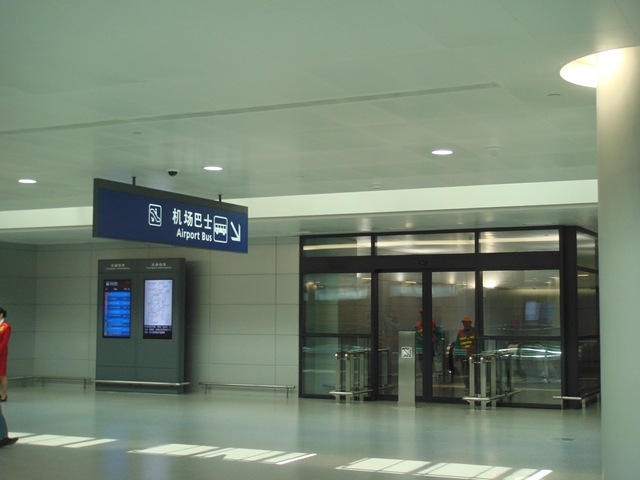 The other very important improvement of T2 is, it has a big meeting place. The big orange square put people who want to meet each other in the square – pretty lovely design. 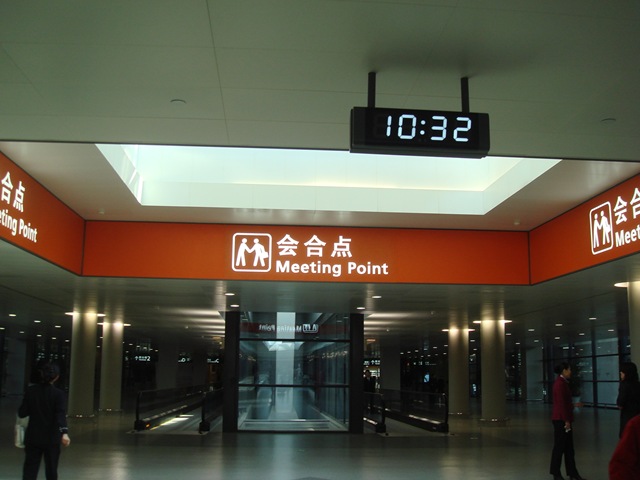 Looking back, it is at the end of the Central Path. 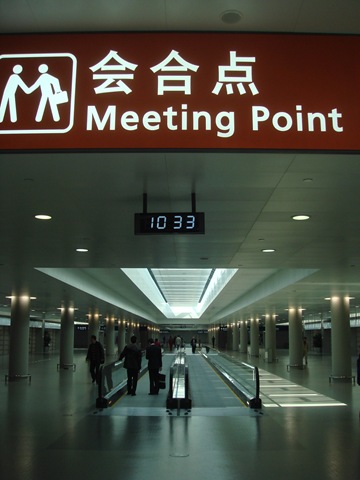 If you ask me to give a name to the new terminal of Pudong Airport, I won’t hesitate to give the name of Sunshine Terminal!

Its walking paths have many ceiling window like this: 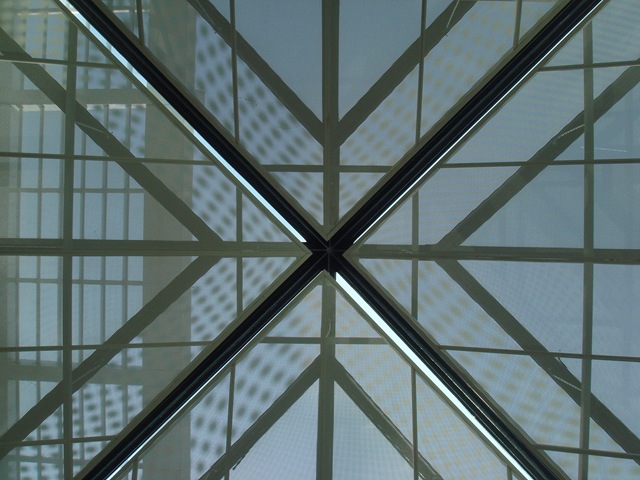 and the sunshine pours down, and made some artistic shadows. I have another article specially written for the sunshine  and shadow of Pudong Airport T2.

They have nice equipments, like these – a fancy telephone booth. The only problem is, I don’t know how to make a phone call with the booth after play with it for some time. 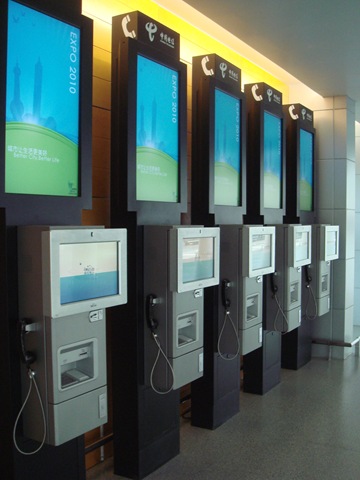 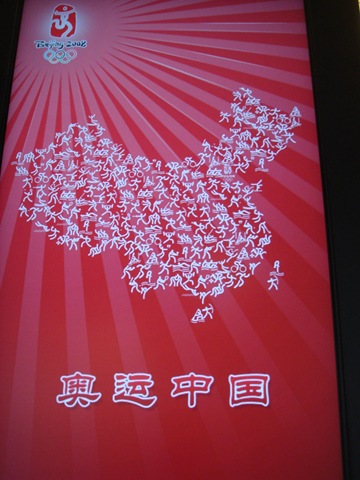 From the a little bit dirty window, you will see that you are pretty close to the huge T2 – you are in the middle way in the central path. 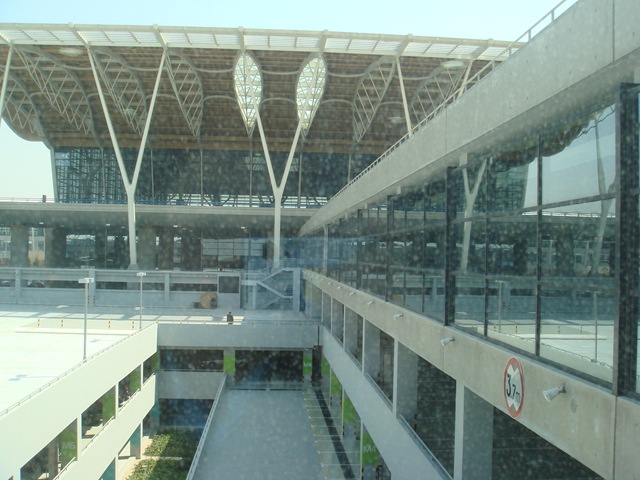 The parking lots of T2 is also improved from T1. As you can see from the photo above, the parking lots start to have identification colors, like this: 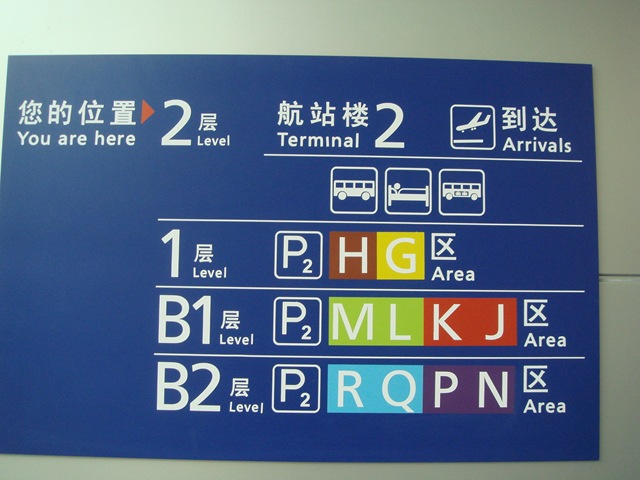 Finally, I completed my 3 minutes walk in the Central Path, and start to finally enter the T2 main building. Before entering the building, you are provided with a chance to go down to the first floor (arrival level) 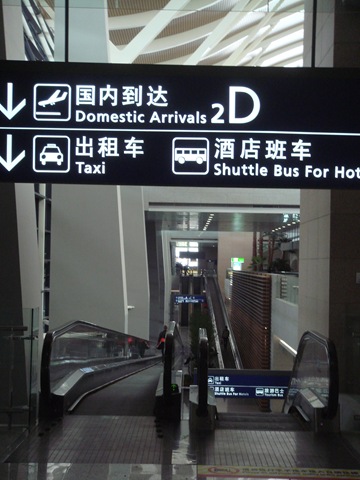 This is pretty handy for passengers who don’t want to wait for the slow lift, like in T1. 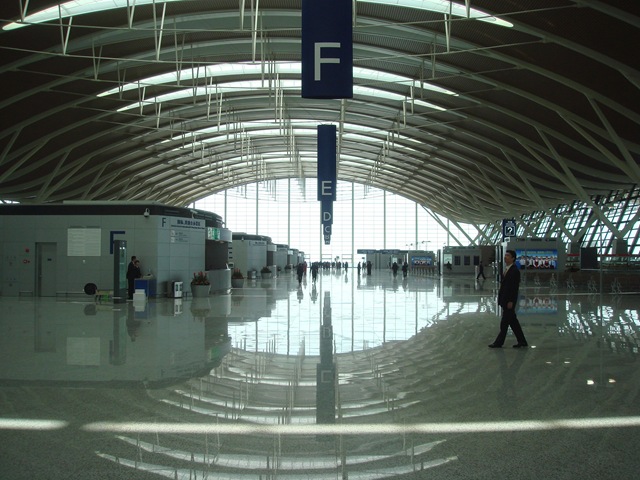 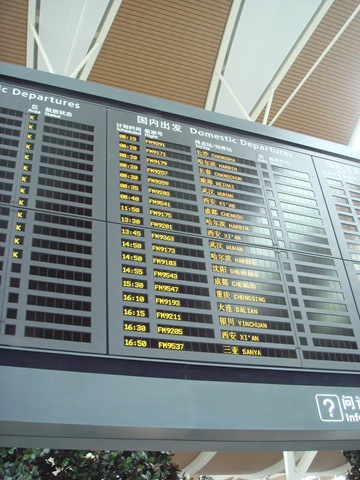 and some artificial plants along the way: 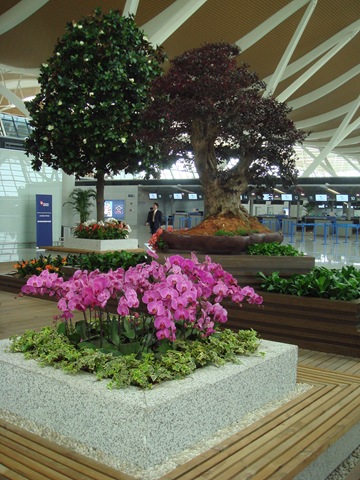 The automatic check-in counter should be put into operation soon: 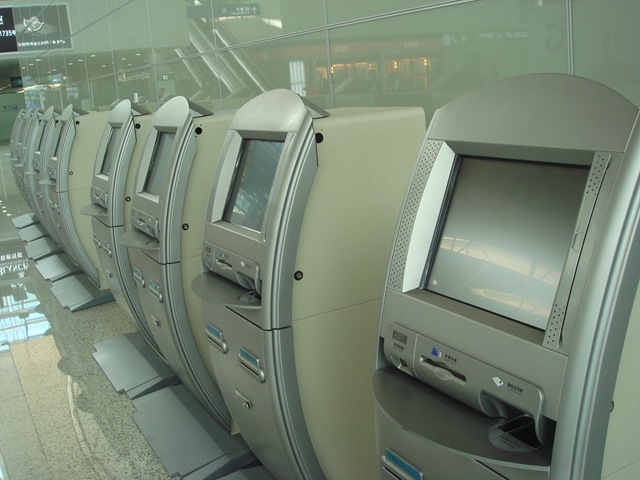 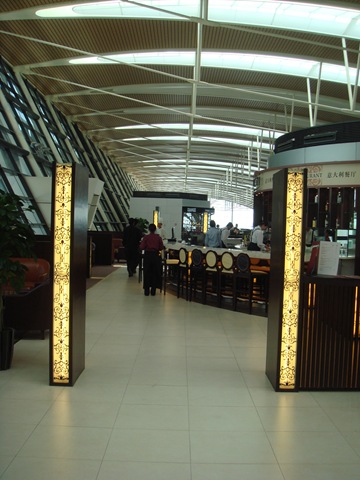 and my favorite Ajinsen Ramen: 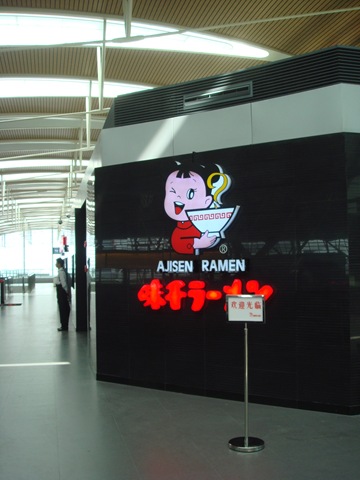 As in the Central Path, the roof of T2 is also the highlight of my tour in T2. Look at the leaf on the roof and the sunshine! 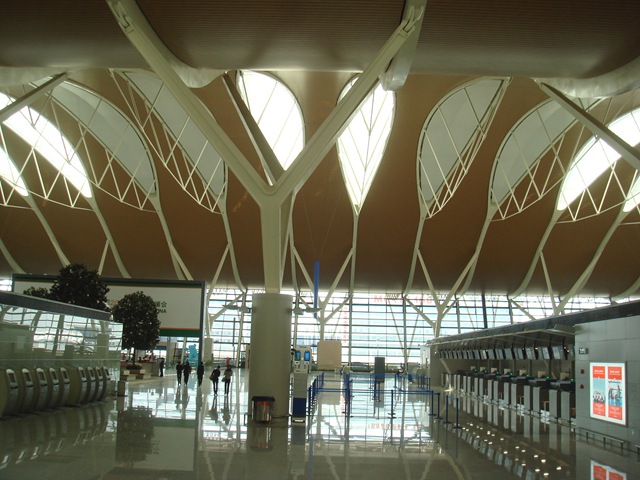 It lit up the whole building, and I would expect the new terminal will consume less power than the T1. 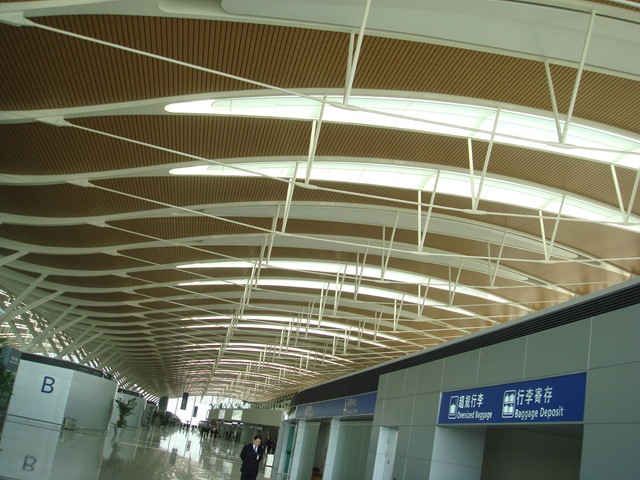 The sunshine leaf is also decorated outside the main building: 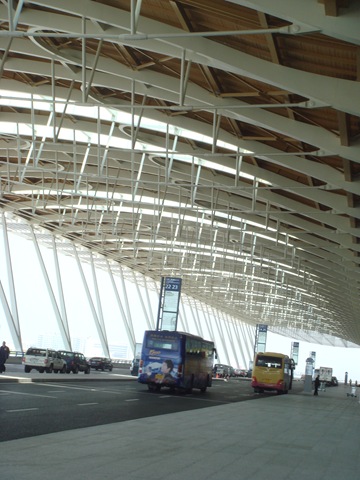 and I have to say, the leaf is BEAUTIFUL! 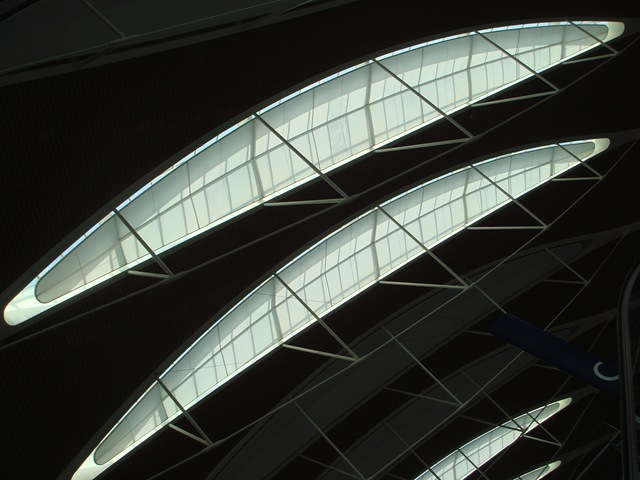 After my tour of T2, I feel very excited. T2 is far beyond my high expectation. It IS a modern airport. I challenged the usability of Pudong airport, and gave negative comments on staff of Pudong Airport, but the opening T2 completely changed my mind. Both the design, the hardware, and service of the new building is a completely new stage of the airports in China. 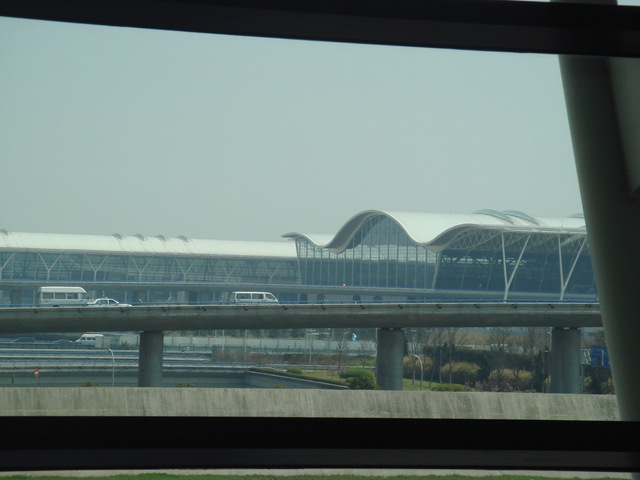 Congratulations to the completion of the T2 of Pudong Airport. It is a great archivement, and I am  so happy to have such a modern, bright, comfortable airport in my city!