According to the official web site of Beijing Olympics 2008, Photo ID and personal information needed for Olympic ceremonies ticket buyers. 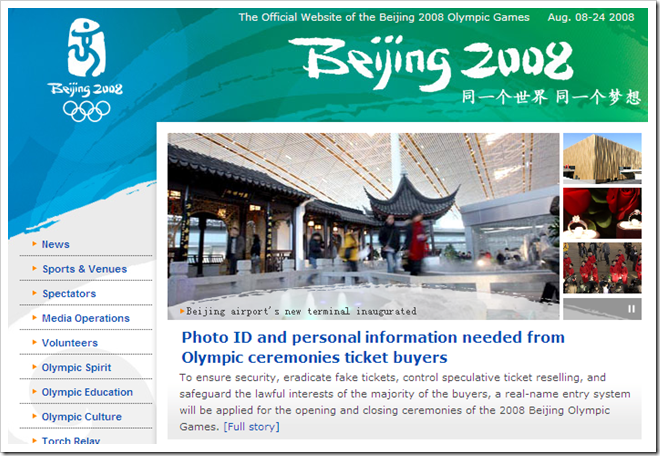 Below is the information ticket owners have to fill:

It seems gender, birth date, mobile, telephone, email, mail address all all other personal information IS very important for the committee to host a successful Olympic. 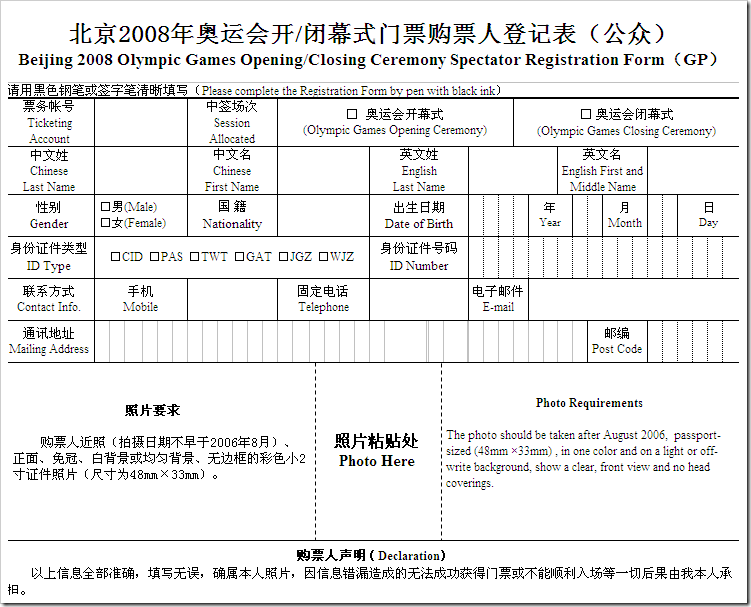 If the ticket buyer fail to go to the designated places to submit their forms in person or via a trustee, they may not be able to attend the ticket. Mail is not accepted. It takes too much time to get a ticket for Olympic.

It is hard for me to tell my reaction to this requirement.

On the negative side, it is a simple solution to complicated problems again. They may also require you do all kinds of silly things, as long as this can make their job easier. It is just as many easy solutions to complicated system, the inconvenience of ticket buyers is not considered at all.

On the positive side, they are at least doing something to fight against speculative ticket reselling, or many other problems. Although this may not be the best solution, it is at least a solution. Any way, unlike Hukou System, it is not mandatory. Then it is OK, that people still have the freedom to give up the ticket if they really don’t want to go…

On privacy, even if I trust the authority to have the good intention to protect the personal data, I do doubt their ability. Well. It is not just for Olympic Ticket Office. To enforce protection to the sensitive data is a big challenge many commercial companies facing. Typically, governments are often even slower than commercial companies.

BTW, Beijing Olympic is going to open on August 8, this year.