Autumn arrives in Shanghai. When Wendy and I passed the garden before my apartment in Pudong, yellow leafs were falling to grassland with wind. There is an old Chinese saying: You see autumn just from a leaf. It is very true.

It is the nice weather for us to go to Biyun International District. I love that area very much, especially on sunny weekend. That is an international district, and there are many good restaurants, coffee shop, and nice greenlands. I bought a copy of Lonelyplanet Travel Writing from the foreign language store there.

At the football field, many teams are playing an interesting game. It is something between football and volleyball. The playground is a football ground, the ball is a football, but the players just use hands to take the ball and run, and sometimes use foot to kick the ball to pass it to other player. The other player get the ball with hands, run with it, and use foot sometimes. The wear just like football players.

Image credit: Shanghaistreets. Note: I didn’t take this photo. Also, it is the photo of 2005, not this year.

On the other field, I saw the logo: 2006 Asia Gaelic Games. I have no idea about what Gaelic, until I did some research back home.

Gaelic football (Irish: peil ghaelach), commonly referred to as “football”, “Gaelic” or “gah”, is a form of football played mainly in Ireland. Teams of 15 players kick or punch a round ball toward goals at either end of a grass pitch. Gaelic football is one of four Gaelic sports run by the Gaelic Athletic Association also called the ‘GAA’.

While not widely known, those who do know it recognise this sport as a strong, skillful, fast paced game. As one commentator put it, “It’s like ballet, but more poetic”.

On site, I saw country flag of Korea. How interesting that a not-so-widely-known game like Gaelic has an Asia competition in Shanghai. Weired.

Many local people stood near the game field and watched this “strange” game.

What to see this “rare” game? It is still there tomorrow. 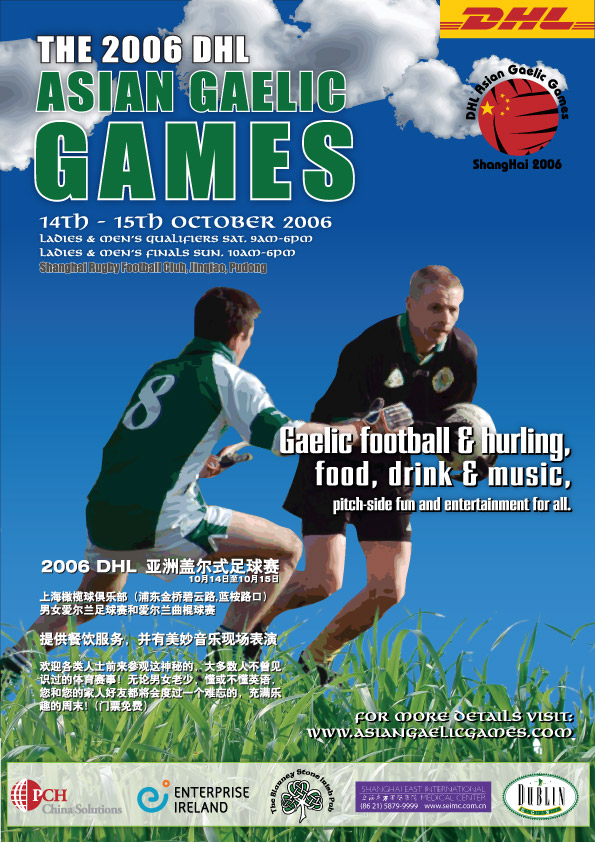 Location: Dulwich International School (just near the Carrefour in Jinqiao.