This is exactly the M.I.T spirit in my imagination. M.I.T is so different from Harvard and very similiar with SJTU (Shanghai Jiaotong University). I also like the magazine of MIT – The Tech. This campus magazine has 20 pages per issue and shares point-of-view from politics to campus happenings. Impressive! 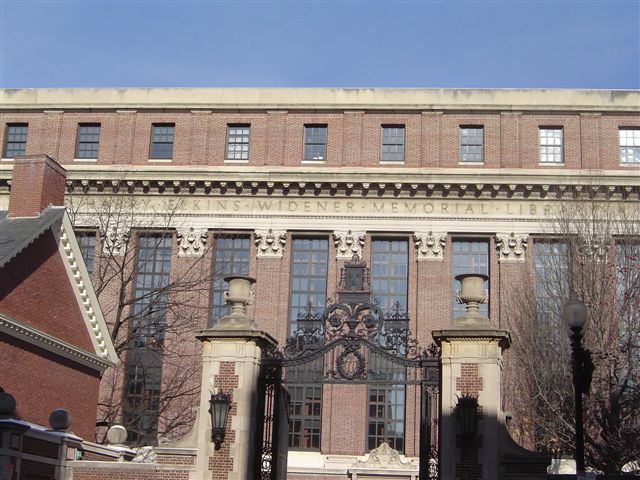 Harvard is a place full of stories. The most interesting story I heard in America was about the Harry Elkins Widener Memorial Library. A senior of Harvard majoring history told me about the story during the Harvard Guide Tour.

Harry Elkins Widener graduated from Harvard graduated from Harvard. He went to Europe for four years. When he went back to New York with all the books he collected in Europe, his ship, the Tantanic sunk in Altantic. Harry’s mother was so sad that she donated all she had to Harvard and wanted to build a Harry memorial library. Besides naming the library after his son, she asked three rules to be written into the contract:

It was said that the month also donated to make Harvard serve icecream at all dining room from morning since 1914 because his son complained a lot that there was no icecream in Harvard.

This story helped me to understand the rational behind so many public donated libraries, parks, statues, schools, art works, and charities. The respect to the donator’s will is an important factor to encourage the donation. I am thinking of Smiling Library project, where I acted as part time consultant. If small portion of money was spent to honor those who donate the books, it will encourage more people to donate – to name the a library in a remote province after the biggest donator, or at least at the donator understand where his/her books go, and get some feedback from those who benefit from the donation, they are all very good way to keep the wheel running.