According to GAO’s blog, his test machine RJRI retired. 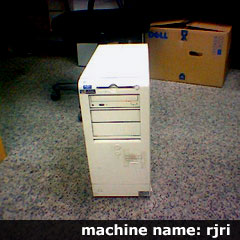 Image in courtesy of Hui-Jie Gao. Quoted from his blog

It is not a big piece of news of a retiring machine, especiall it is a common, Dell, personal computer, but we will miss that machine. RJRI started a new kind of naming convension for computers at work. My laptop was named \\sha-jswang-01. My previous test machine was named \\sha-jswang-02, some times when I have more than four computers under my command, I named it \\sha-jswang-03, \\sha-jswang-04… SHA means Shanghai and jswang is my alias in Microsoft. BTW, SHA sounds exactly as 傻, meaning silly or stupid in Chinese. So the names sounds “Stupid jswang 01”, “Stupid jswang 02″… Haha.

Xiao Gao came and named his machine RJRI, with the first letter of Ren Jian Ren Ai (人见人爱), meaning You see it, you love it. It seems a better name than “Stupid …”. Although it does not agree with the stand naming convension, it brings much fun.

After RJRI, the second PC was named RJRYI (人见人又爱) or You see it again, you love it again. :-D I remember there are many more and more working machines within Microsoft changed to this interesting name, such as JJYY (唧唧歪歪). I cannot remember it is Linda’s or Eddie, or Eddy’s machine.

So the retire of RJRI is a big thing for its computer friends.

BTW, Eddie’s blog has a post of some pictures of the owner of RJRI – XGAO.