Yahoo! China launched Yisou.com, the Yahoo! search engine in China. I am a keen fan of Google and I love everything from Google – the search engine, the GMail, the Adsense program, and funny things in their lab. I thought Google was the best in search engine world. However, I start to doubt that. Yisou.com seems to be doing a better job in the Chinese market. It is so similar with Google.

Yisou seems to have indexed more content than Google. For example, if you search Wangjianshuo in Google, you get 5,150 results (as of today). If you search Wangjianshuo in Yisou, 7,640 items were returned. Also, the speed of Yisou is really faster than Google – it is almost the same speed as Google when Google just started. It may because not many people use Yisou now. 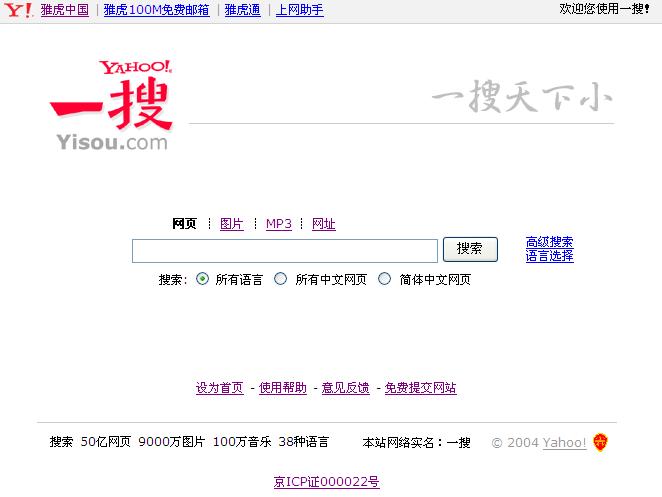 Screen capture in courtesy of Yisou.com

It is also reported that Google invested in Baidu, the other top search engine in China. It is interesting that Baidu got the opportunity to grow up during the time when Google was banned.

Another auction website, yipai.com, was launched recent. It is a joint effort of Yahoo! China and Sina. I believe it will gain market share rapidly from Eachnet. The functions and interfaces are much better than Eachnet.