Have I ever show off the nice violin statue under my apartment? 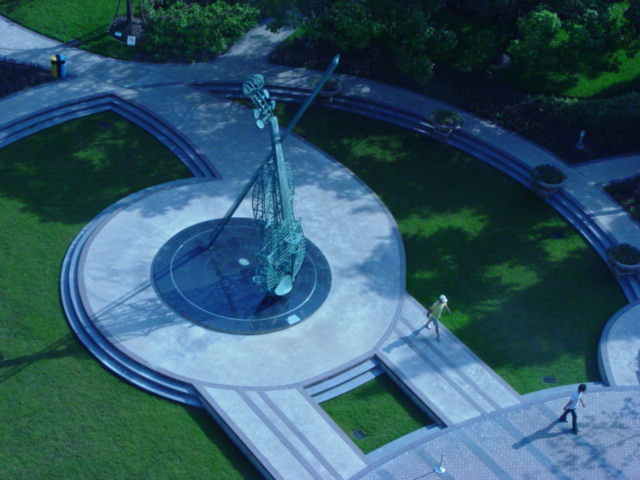 It looks nice but a woman taxi driver didn’t think so, because she drove her taxi into the low land on the right side of the violin, exactly from the place where the guy in yellow passed by.

It sounds so stupid to drive a car off the road and into the grass land. It is especially stupid if I tell you that the grass is at least 50 cm deep. Getting out is not easy. She managed to completed the hard job.

LOL – a Taxi Over There

When I walked out of my house to have some exercises at night round 10:00 PM already, I suddenly found a taxi with both the front and rear lights turned on. It was parked on the grass!! It is so funny that I could barely see its tires. The frustrated woman taxi driver was moving her car hardly in the small area and some guard were busy setting up “bridges” for the car, hoping to get it out.

The driver was complaining about the darkness and the design of the entrance, full of anger. She did do something wrong. She should had turned right and driven around the whole xiaoqu (Waltz Garden) to get out – the circular road is single pass road. However, this lady drove for opposite direction, despite the white arrow on the road. Then the “right turn” sign in the area was interpreted to be go strait ahead and turn right, because she saw no road to turn right, because she was on the road. At a dark night like today, she easily drove her car into the “trap”.

The victim told me that she has been a driver for 7 years. I didn’t believe that, since she really had a hard time to move her car half meter to the right to be able to get on to the “bridge”. After going forward, reverse, forward, reverse for about 10+ times, her car was still at where it was. So she asked for help and I happened to the only one who could drive.

Ha. I am a new driver with less than 3 months experience, but at least I was confident that I can move the car to the right place. It was exactly what the field exam tested when I was applying for a driver’s license. 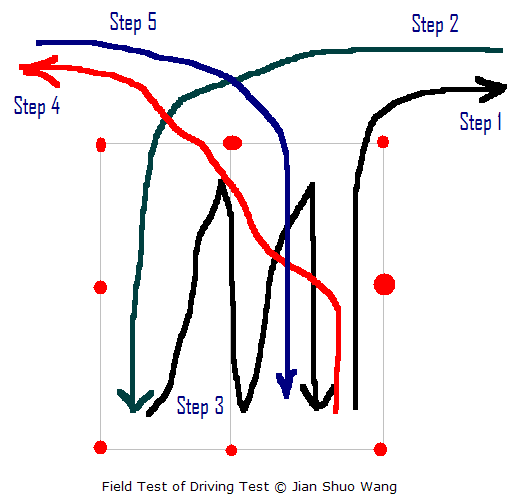 It was just the Step 3 in the test.

After confirming with her that I should not be held responsible for any damage to her car, and getting some witness for the agreement, I jumped into her Qiangshen taxi. (I was still not silly enough take the risks). In 30 seconds, her car was parked just before the bridge. I got out of the car and told her, this was her show time since to drive a car up stairs like this is too dangerous for the car. She’d better take the risks herself.

Look at the bridge. It is almost nothing. The guards were so nice to get some bricks, four to be exactly, and put them on the stairs. That was all. Actually it didn’t help, only a little bit better than nothing. Running the car onto the stairs had no different with driving it on to wall. Oh, my God. She really tried only to break the head of her car. Oh. The heart-breaking knocking sounds between the car and stairs! Looking anxiously at her damaged protection pole, she gave up. She began to complain about the darkness and lack of signs.

People passed by and shouted, “What a Car!” or “Ha Jie Gun” in Shanghaiese (Don’t even try to guess what Jie Gun means if you don’t know Shanghainese. It means “strong“, “super“) But there were no construction site nearby and it was not easy to find long wood stick long and strong enough to setup a real bridge.

About 1 hour later, a guard dragged one piece of wood pole to the site. Another half hour later, an old lady brought some other woods here from her home. With all the materials, a “bridge” finally came into shape.

It was a Trap

It was interesting to know that this was not the first car falling from the stage – other two drivers had done so already. They were all dragged out by professional pulling equipments. This taxi driver just didn’t want to pay more money for the pulling car. It should be around 400 RMB. I believe more signs should be setup before the violin area to avoid further victims. It is very dangerous if children are playing on the grass land while the heavy car falls down.

Finally, She Got Out

I didn’t wait there to see how she got out. I just check the status from time to time from my window. Around 00:20 in the mid-night, the car disappeared from the grassland. It was so funny – I cannot help laughing again when I thought of the poor driver, who drove her car down into the “trap”. Good luck to her and don’t make the same mistake twice. :-)

10 thoughts on “Taxi Fell into Trap”