Busy day! Didn’t get a chance to sit down or have a break the whole day, until now.

I didn’t have much impression about Guangzhou this time. Just two comments:

Will get back to Shanghai tomorrow morning.

Guangzhou is a city full of energy. I was surprised to get the invitation from my friends Peng and Yu at 9:30 PM to visit their home. I meant to call to say hello to them only. After confirming that it was not very late to visit their home, I took a taxi to their nice newly decorated apartment.

After very interesting talk – all about the old times and the current life, they suggested to have a “cup of tea” outside with our other friends Tao. It was almost 10:30 PM then. I was really surprised: “Is it too late?”

In Shanghai, although we return home late, but we don’t go out of the door after 10:00 PM. Maybe for places like U.S, people tend to stay home after work….

Not surprisingly, Tao was still working on a project in the CITIC Tower. We made the appointment to gather at a “tea house” near the tower.

11:00 PM sharp, five of us met at the Bing Sheng tea house. Later I found out that it was not for tea. It is another dinner with five dishes. We talked and laughed, with all the funny stories back in 1995 to 1999 1992 to 1995 when we were studying in the same class at high school. I even took out my computer to review all the old pictures. Look at the young and cheerful faces! 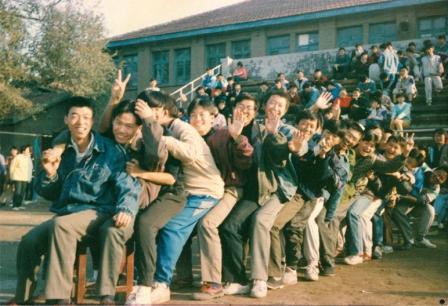 I promised to create a new classmate BBS in this week. The old board of 5460.net and netbig.com are just too bad.

After paying the bill and leaving the restaurant, it was already around 2:40 AM the next morning. The restaurant was still full with new customers coming in.